I still remember how I found out about the city. I was watching YouTube-videos with Riemer on the Apple TV, probably about monorails, when autoplay came up with a documentary. This one, made by an Norwegian student in Chongqing.

I had to go there. Even if it was just to see that monorail. You’ve probably seen it too, on Facebook, or half a year later on tv. The monorail passes through an apartment building, so it went viral. I guess secretly half the world population is autistic, with a thing for trains. (Video on my twitter!)

Chongqing is in China, and not the easy-China, like Hong Kong (which is technically both China and not China, please do some googling yourself if you want to know more), but the hard-China, with communism, The Great Firewall and tough visa rules. To travel to Chongqing, you need to 1) travel from another country, 2) to another country (but not the one you just came from), 3) without further stops in China, and 4) your “transfer” in Chongqing has to be 72 hours or less. Oh and, please do have your hotel address at hand. They will ask for it.

The party starts at the airline check-in desk. “Can I see your ticket to Korea?” (I bought a ticket to Korea to comply with the visa rules, not because I wanted to go there. From Korea I just took Cheapo Airlines to Tokyo.) “What’s the address of your hotel? And their phone number? Who will pick you up?” Pick me up? Hmm, nobody? I’ll just take the metro? Or a taxi or something? The lady behind the desk looked at me frowning, made some phone calls, checked an enormous list with numbers and situations, and then, finally, I got my boarding pass. Apparently, the airline has to pay for the return ticket of every traveler that gets rejected by China, so that explains why they’re so tough.

At Chongqing immigration, everything went smooth. I mentioned the 72-hour transit, got a piece of paper, wrote down the address of the hotel and that was it. I was allowed to come in. I followed the signs to the taxi stand (it was pretty late when I arrived, so the metro wasn’t an option anymore) and walked straight towards a bunch of yelling, spitting, smoking men. They tried to talk to me in Chinese, which was obviously super effective, eh, not. I assume they were trying to lure me into their illegal taxi’s, but you know, I usually don’t fall for screaming, smoking, spitting dudes that look like they’re about to rip you off. So I calmly proceeded towards the official taxi line.

My official taxi driver was also yelling. He immediately drove off when I got in, so when he asked me where I needed to go, and I could only show him the address in Chinese on my phone, that didn’t work so well. I guess that was also what he was trying to tell me, because his voice sounded like: “What do you think, stupid woman?!” Eventually he stopped the car on the side of the road, to enter the address in his navigation app. And since I had my pocket wifi from Hong Kong, I could verify that he was indeed going the right way, without ripping me off. When we arrived at the hotel after 30 minutes of driving, the meter said 60 yuan. (About 6 euros.) I gave him 100. He may have been yelling, but I decided to kill him with kindness.

That night, when I looked out of my window at the 27th floor of my fancy hotel (Glenview), I didn’t really get it. It was só dark! Beneath me, there wasn’t a single light on. Sure, it was late. But huh?

The next day, when I decided to go for a walk towards the ropeway over the Yangtze river, I discovered why it had been so dark: All the buildings were empty. Only on the street level there were still a few shops, but the rest was boarded up and closed down.

For a day I thought Chongqing was poor. But on my second day, I got it: New skyscrapers will be built here! Even buildings as new as from the 80’s are already being demolished, to make way for higher buildings, more roads and more public transportation. Chongqing is booming, but at the same time gentrification is rampant. Every day a thousand new inhabitants relocate to the city, that already has 31 million inhabitants (when you include the suburbs). Before the city goes dark at night, all the skyscrapers light up in the biggest (and probably most energy-consuming) light show in the world. 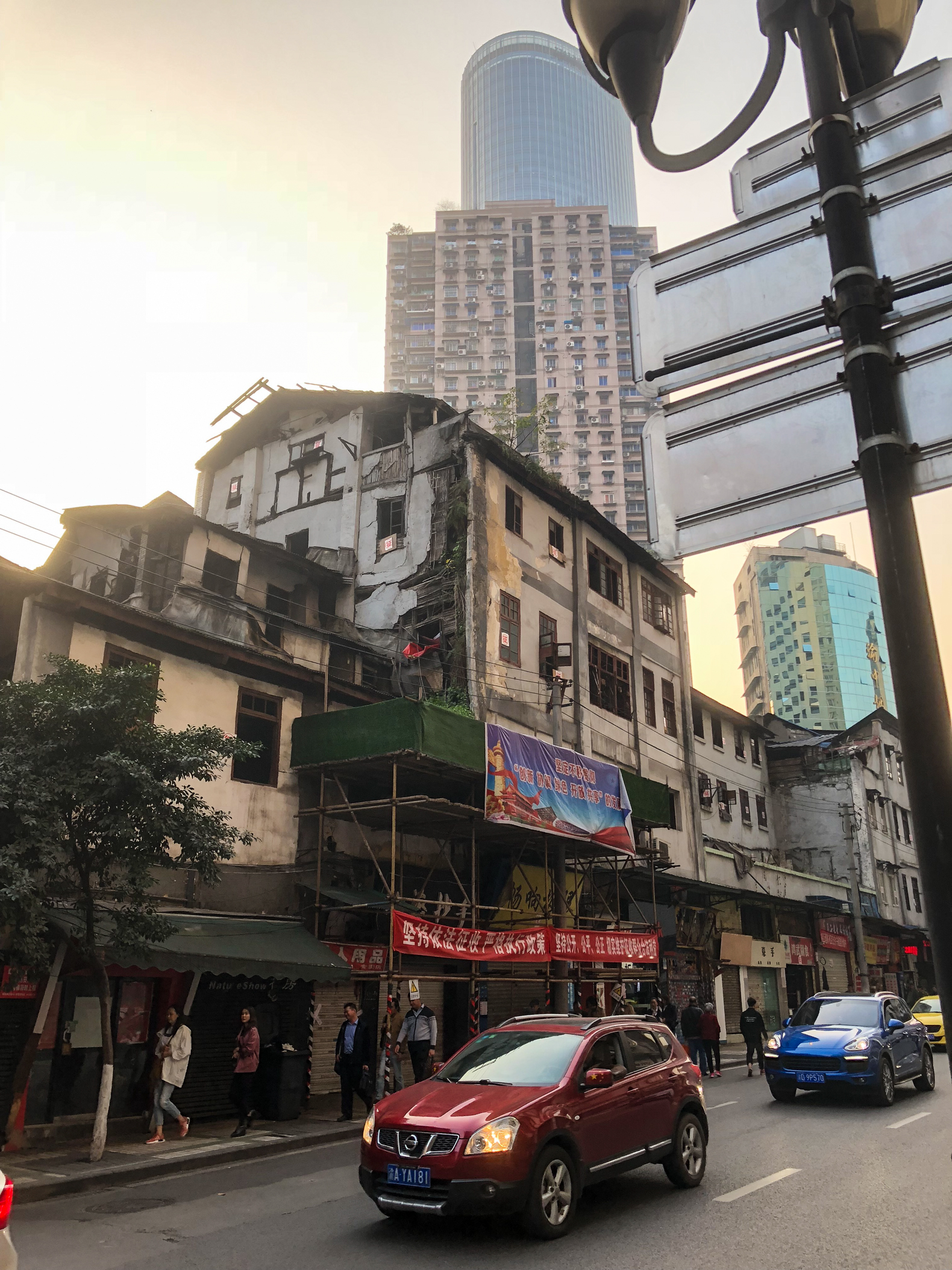 Soon: the next skyscraper! 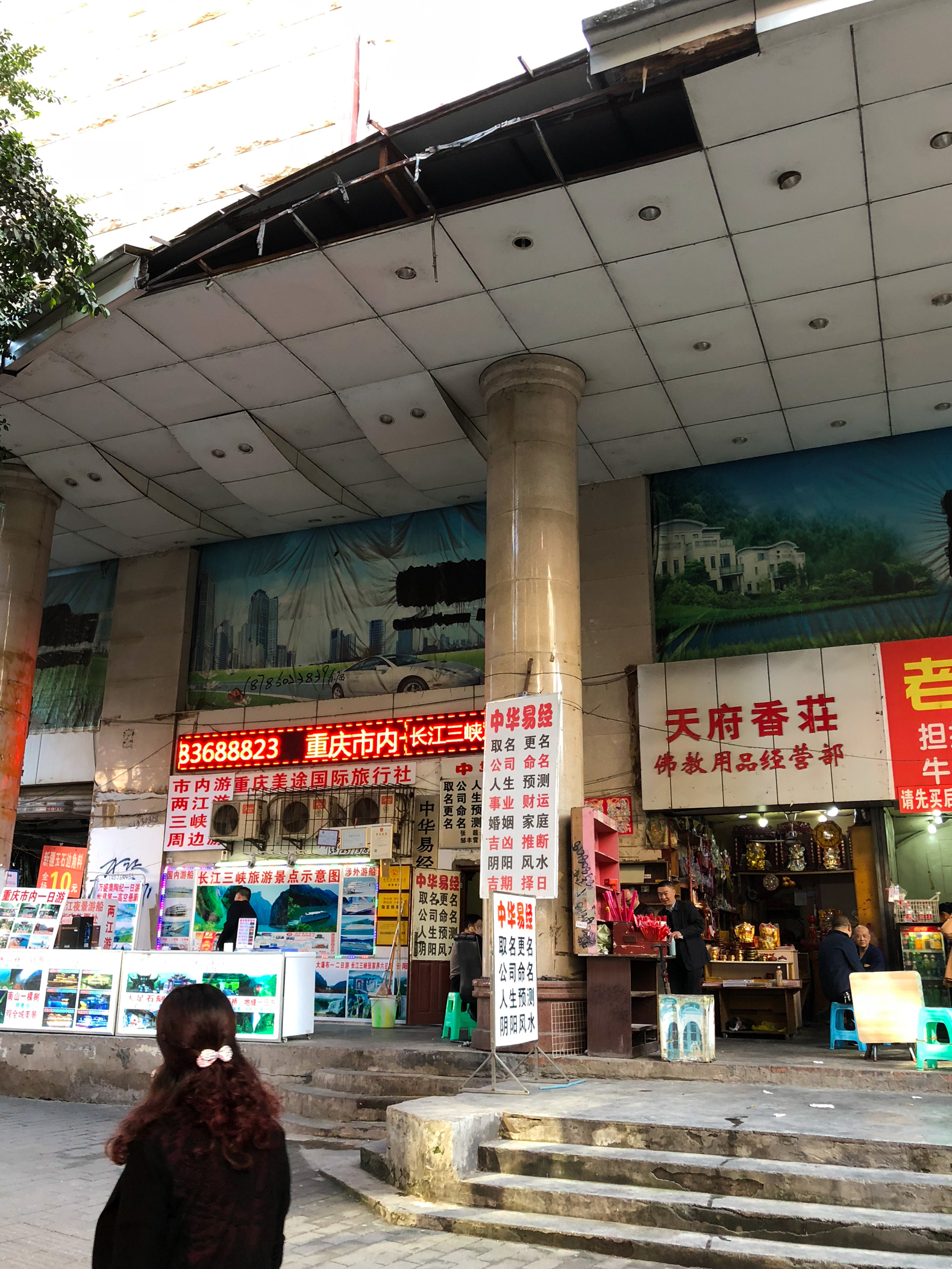 “Fixing that ceiling? Why even bother…”

city by the waterside

During my morning walks (both days I did over 10.000 steps!) I didn’t feel unsafe for a moment. From the fancy city center, where Prada and Gucci stores (communis-what?) seem to vie for who has the most gaudy storefront, I walked through narrow alleyways, past shops that sell only LED-strips or rice cookers, past soon to be demolished hovels, homes with barred windows (HOW IS THAT EVEN SAFE?!), public toilets of the hole-in-the-ground kind that you can smell from afar, and food stalls right across (WHO CAME UP WITH THAT?!) to the waterside.

The Yangtze. The famous Yangtze. Shrouded in mist or smog or a combination of both. I already noticed that everyone smokes in Chongqing, but yeah, I get it. I can’t get any worse for your lungs anyway. 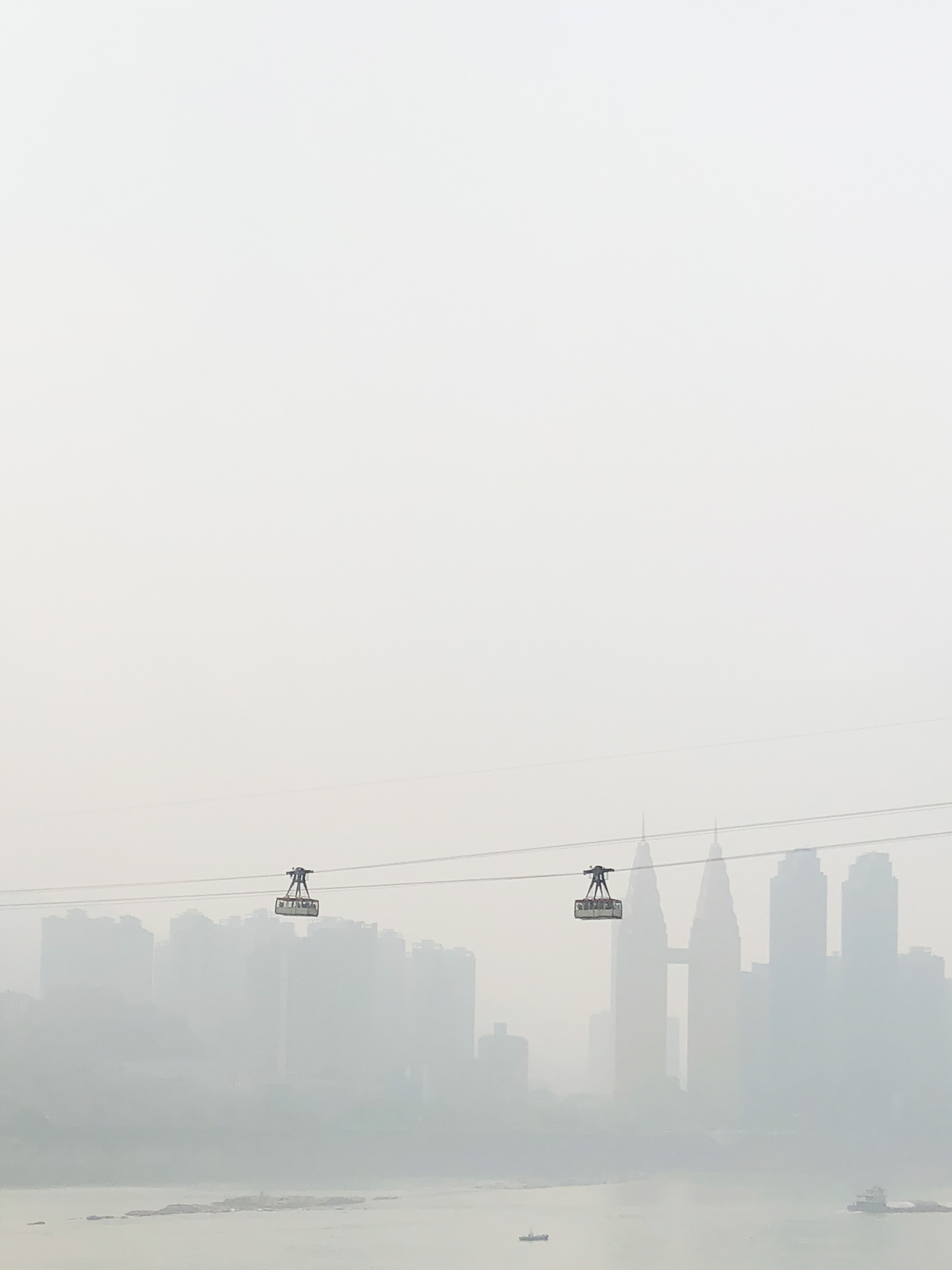 Back in the day, people crossed the river by ropeway. Bridges would be too expensive. Nowadays they build one bridge after another. So when I saw the queue for the now touristy ropeway (accompanied by signs as if I was in Disneyland: “waiting time 60 minutes from this point”), I decided to take the metro. Line 6 takes you, under the deck of the motorway, over the Dongshuimen Bridge to the other side of the river. Beautiful views, no queue, 20 cents for the ticket. I walked back. It was gorgeous. 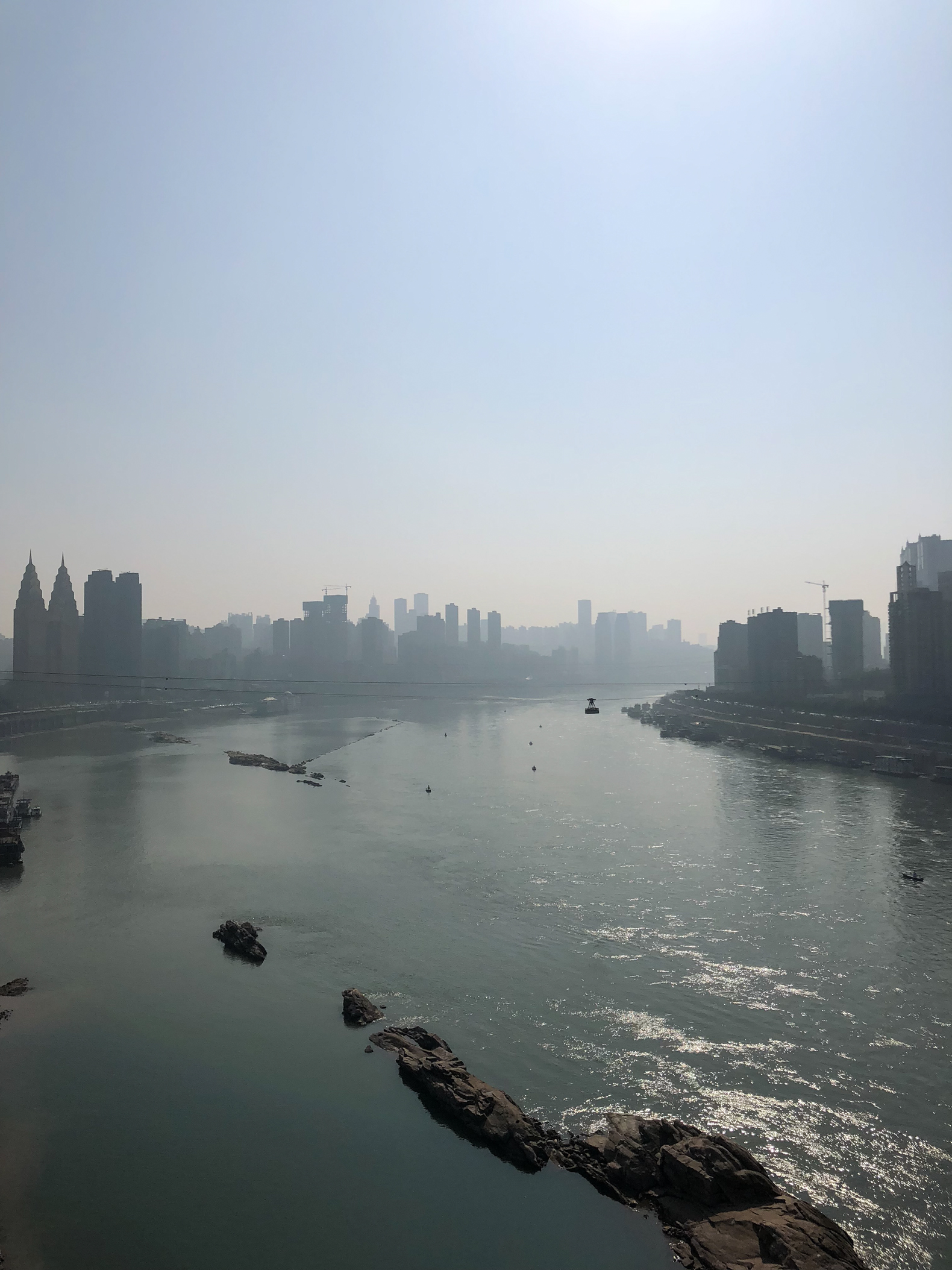 The Yangtze river in better weather 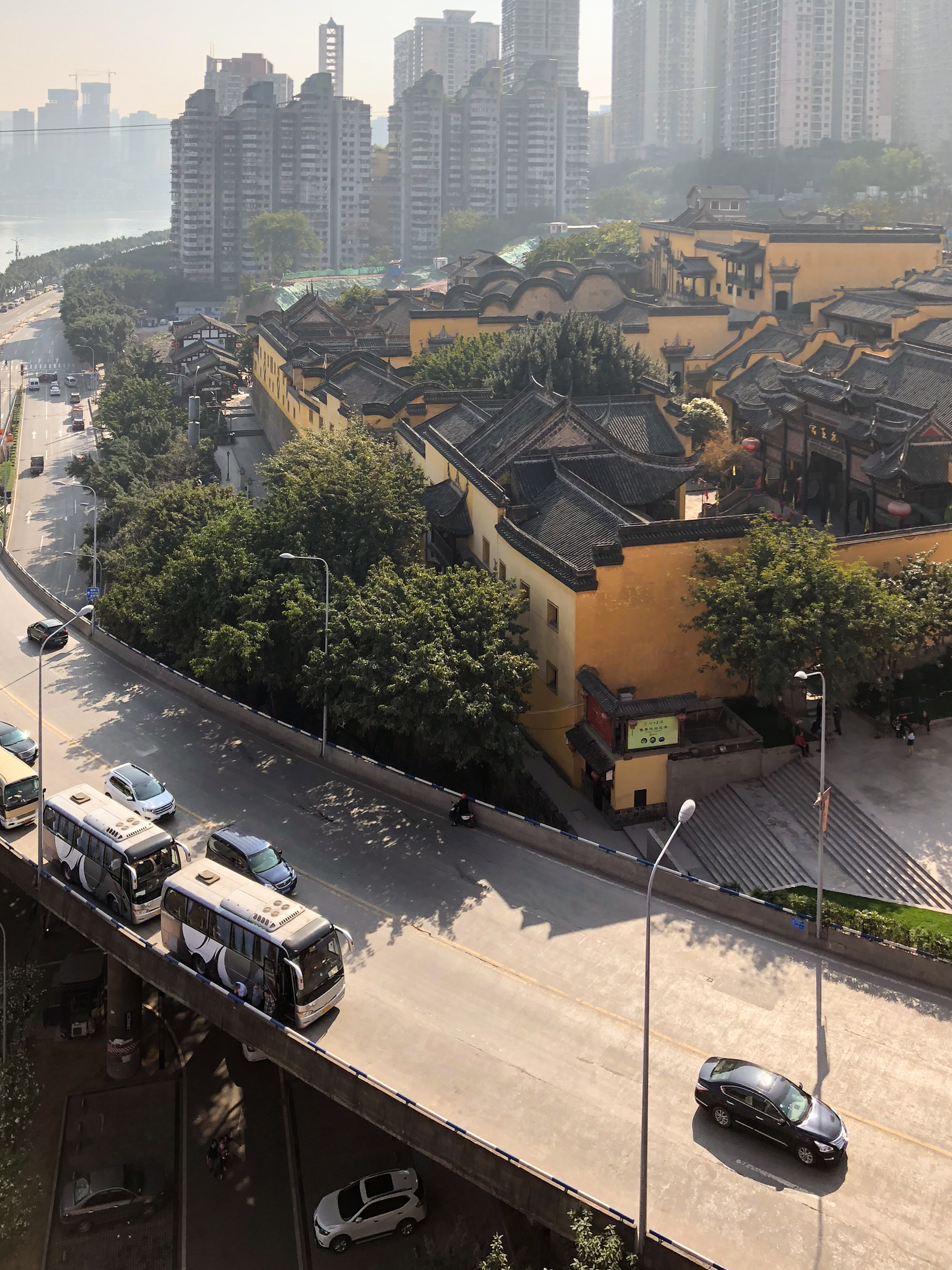 Old versus new. Behind these temple grounds they’re building a new cable tram, to replace the old one that was closed in the 90’s. 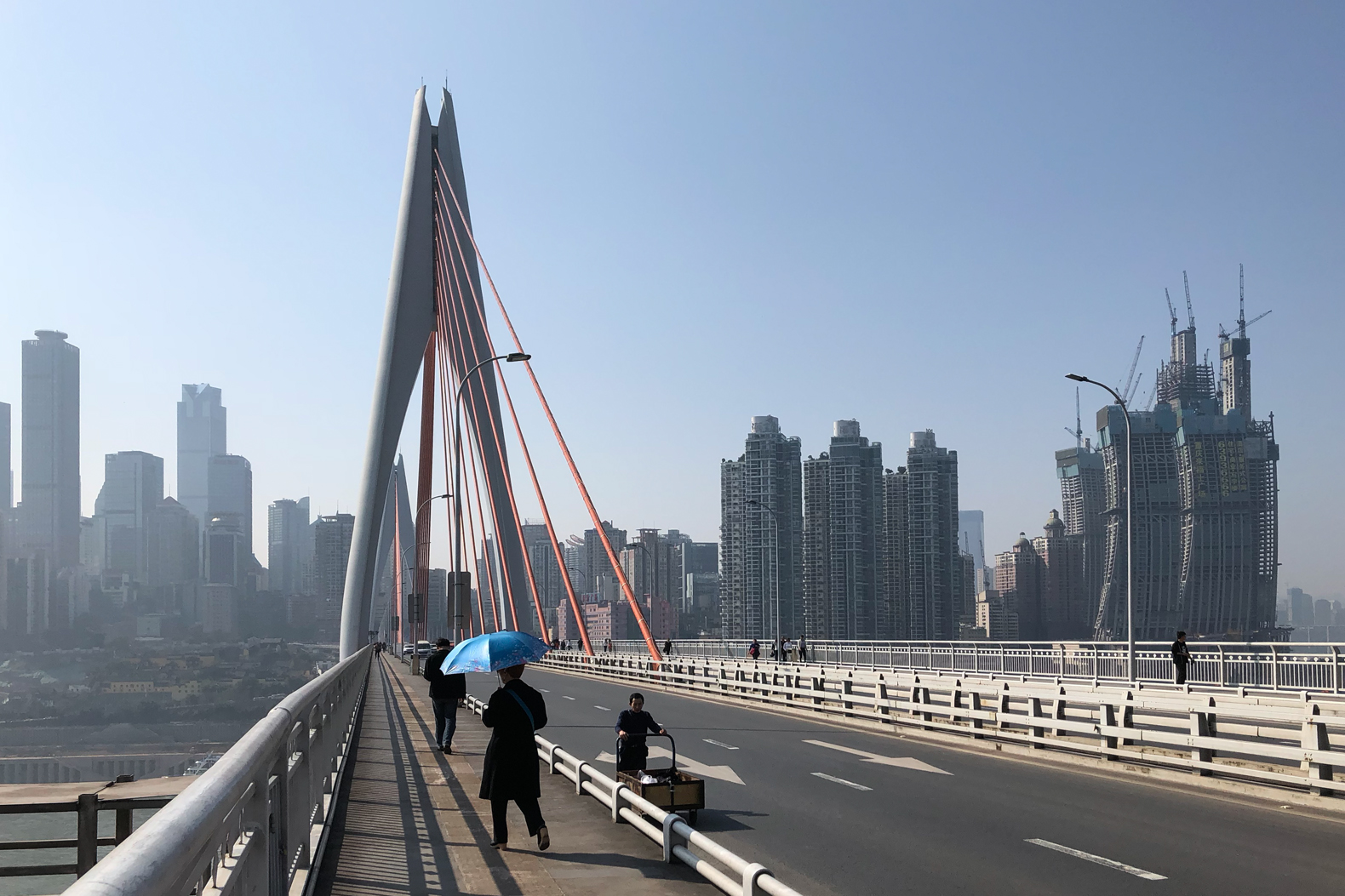 This is Chongqing. While construction goes on in the background, and a well-off person is using an umbrella to prevent getting a tan, a worker pushes a hand car. He will get a tan.

“Double celebration”, that’s what the name Chongqing means. (The original characters spell “central capital”, but that sounded almost the same, so they went with the party.) The name could refer to the two rivers that meet, the aforementioned Yangtze and the smaller Jialing. For me, it meant two lovely days. Three days after I arrived, I had to leave Chongqing, due to the 72 hour rule. The taxi driver the hotel arranged me turned off his meter and asked me “100 OK?” – “You motherfucker!”, I thought. “Fine”, I said. I didn’t care. I had fun. 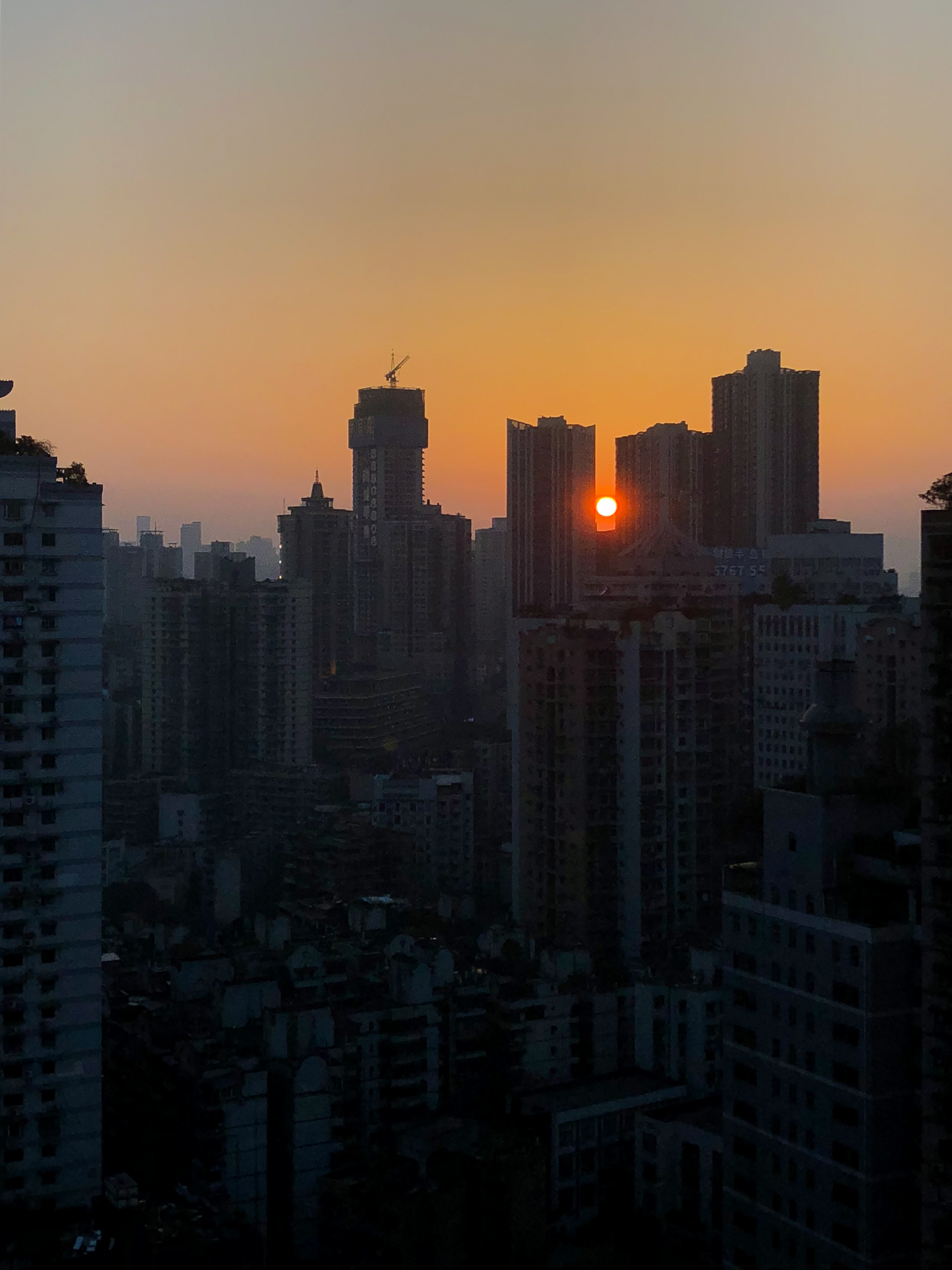 The sun sets right in between two towers, on the last night of my stay. It reminded me of Stonehenge, where the sunrise in between two stones marks the turn of the seasons. This is a modern-day Stonehenge, in a city at a turning point between communism and capitalism.