Who wants to go back to Namie, Fukushima?

On the 15th of March 2011, four days after the devastating earthquake and tsunami, and the subsequent disaster of nuclear plant Fukushima Daiichi, all inhabitants of Namie that aren’t evacuated yet, are ordered to leave their town. The radiation levels in the village, just eight kilometers away from the plant, are way too high.

A little over six years later, on April 1st, 2017, the inhabitants are allowed to return. The train station reopened, a brand new post office is constructed and roads have a new layer of asphalt. Still only a hundred of the 20.000 former residents have gone back. Houses are inhabitable, people built a new life somewhere else, and well… Is it really safe now?

It’s at least safe enough for a short visit, I reckon. I’ll be exposed to 170 nGy per hour, so my few hours in Namie will give me as much radiation as an x-ray at at a leading dentist. And I haven’t been to the dentist in years, so I’m safe. 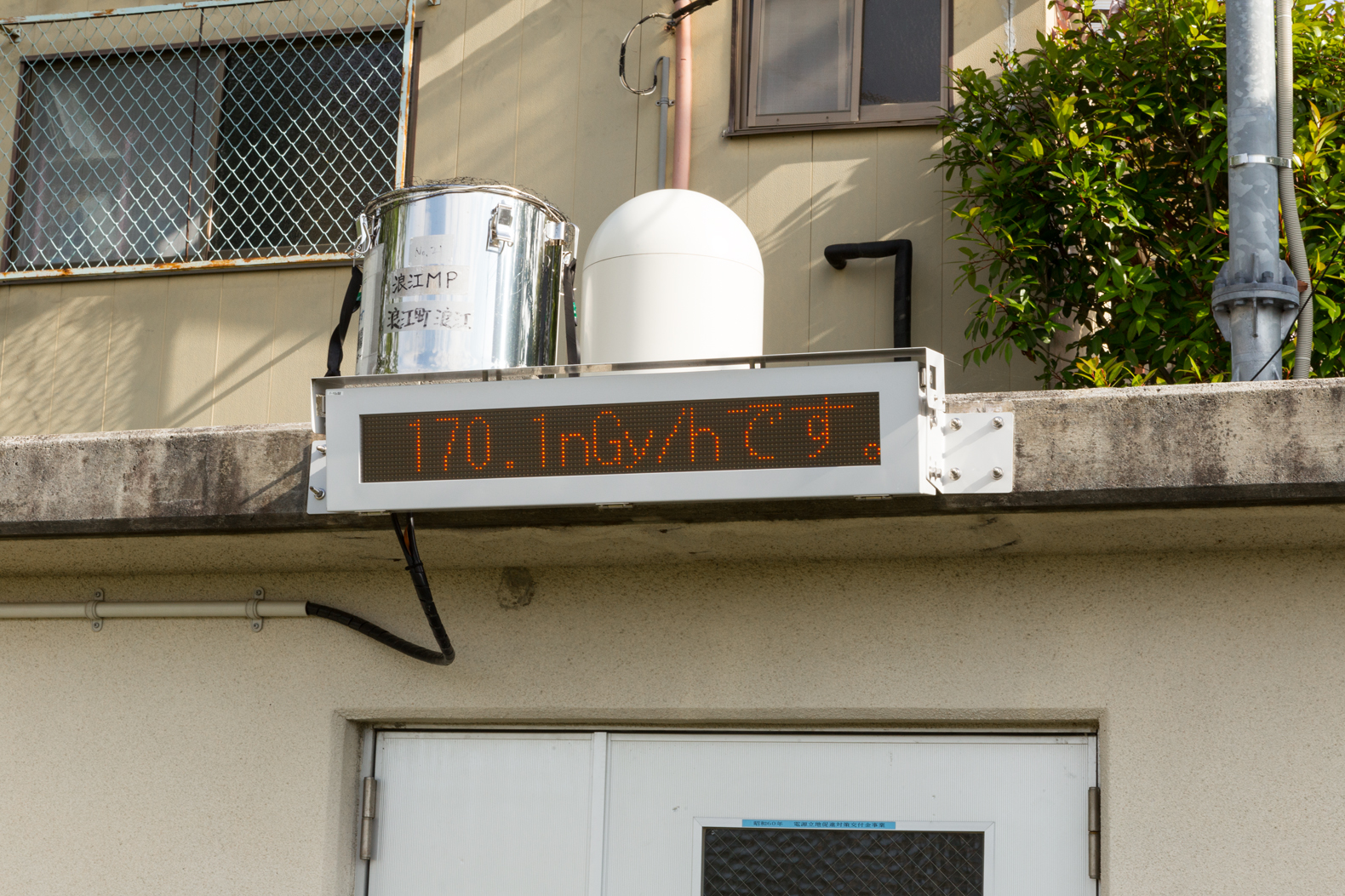 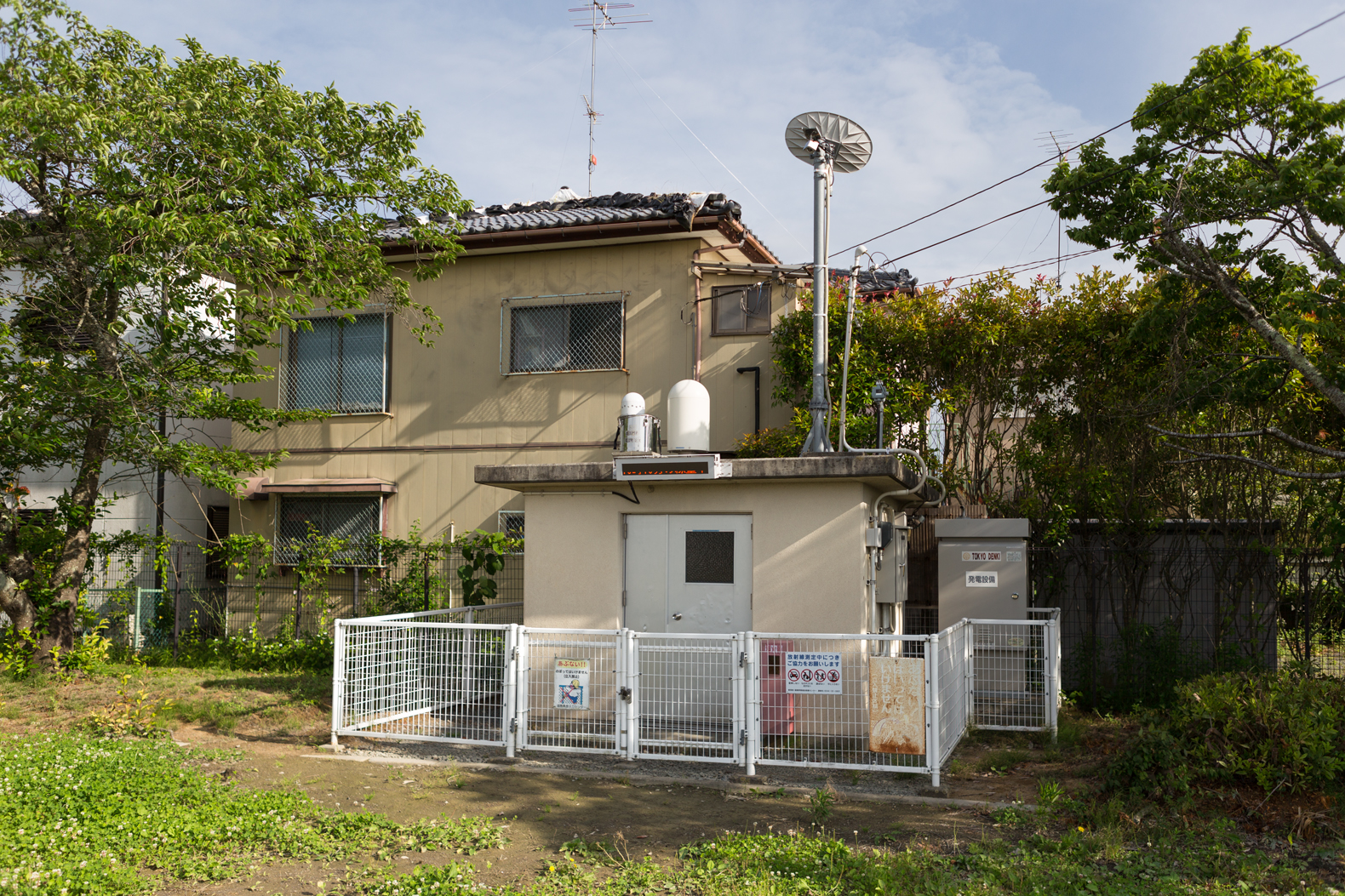 The end of the line

I take the train from Sendai. Once about every hour and a half a small train departs. The journey takes two hours. According to the station signs, my train travels to Minamisoma. Eh? That’s four stops before Namie… Oh well. I figure that, since the new stations have opened just recently, the information may be out of date.

A big part of our route leads us along the coast line. Google Maps shows me that the tracks used to be closer to the sea, but they’re constructing a big, concrete tsunami wall there now.

At Minamisoma the train stops. Except for two other people, everyone gets out. I ask the railway guard if this is the final stop. “I want to go to Namie”, I say, a bit embarrassed. I wonder what the guy thinks of me. What crazy person wants to go to Namie? “Stay in this train”, he says. Okay. Ten minutes later, we continue. Twenty minutes after that, we arrive at Namie. Final destination. Not that the tracks end in Namie, but the route to Futaba is still off limits. Too much radiation. 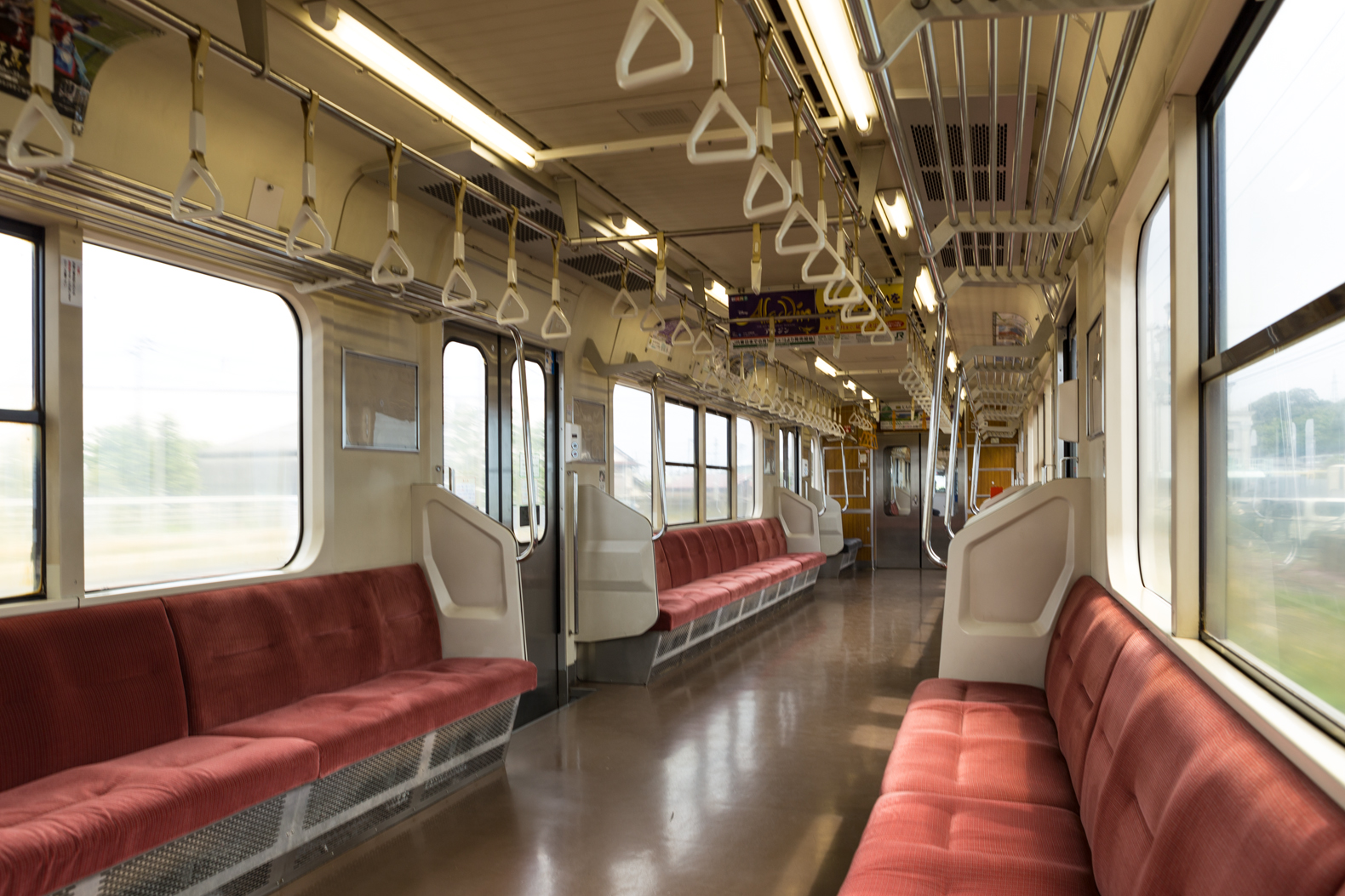 The station guard greets me politely. His small station is brand new. One ticket window, one ticket machine and a map. Two vending machines on the inside, two on the outside. One of those sells ice cream. How nice. “Shops and restaurants have reopened”, I read in a news article. I walk out of the station, and my first reaction is: “Bitch, where?”

All the shops and restaurants I see, aren’t even safe to enter. They’re skewed, their signs dangling from a cord, the facade crumbling away. More than once, I’m fooled by a vending machine. But every time I come closer, it turns out to be an old, broken one. 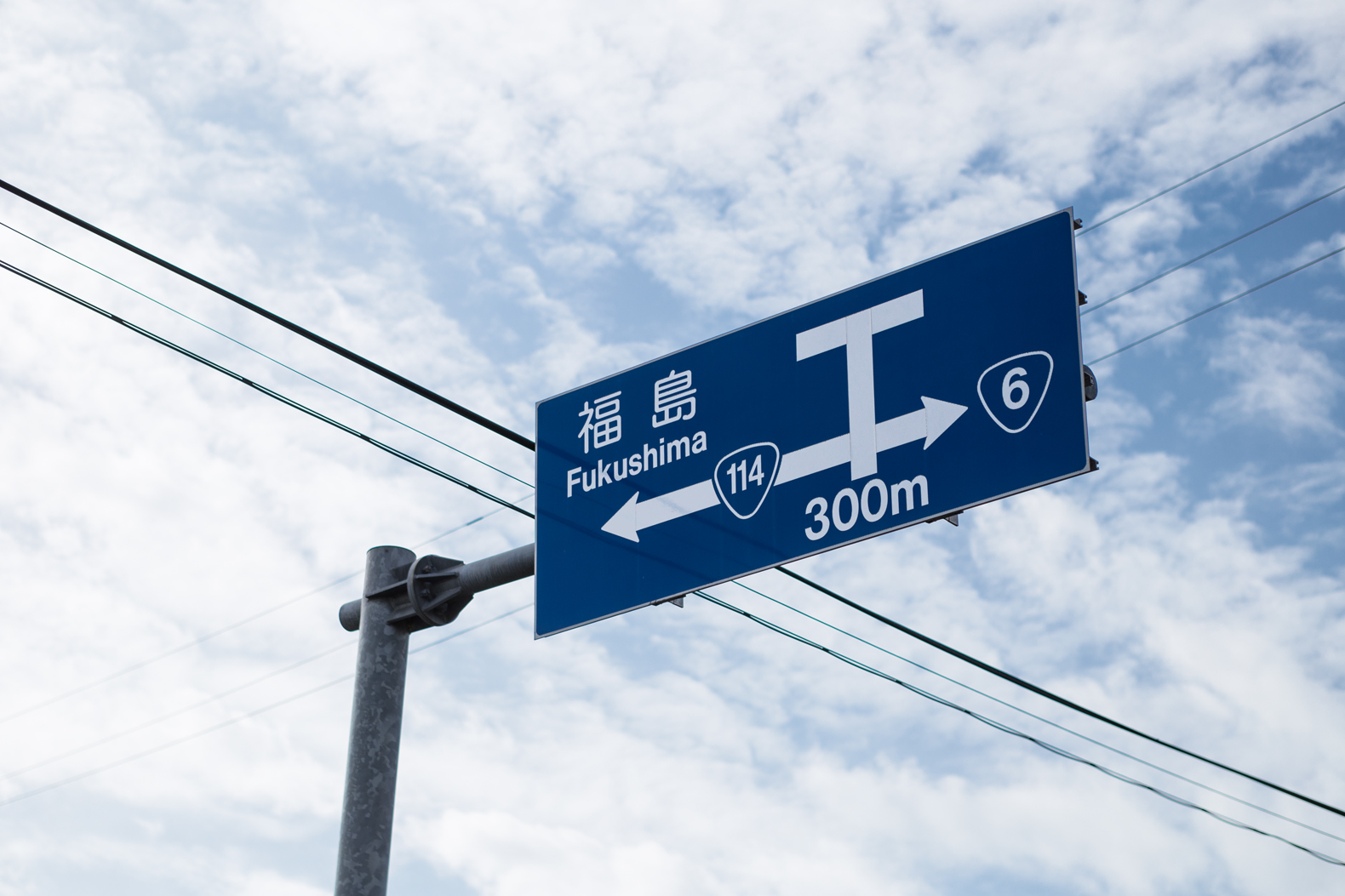 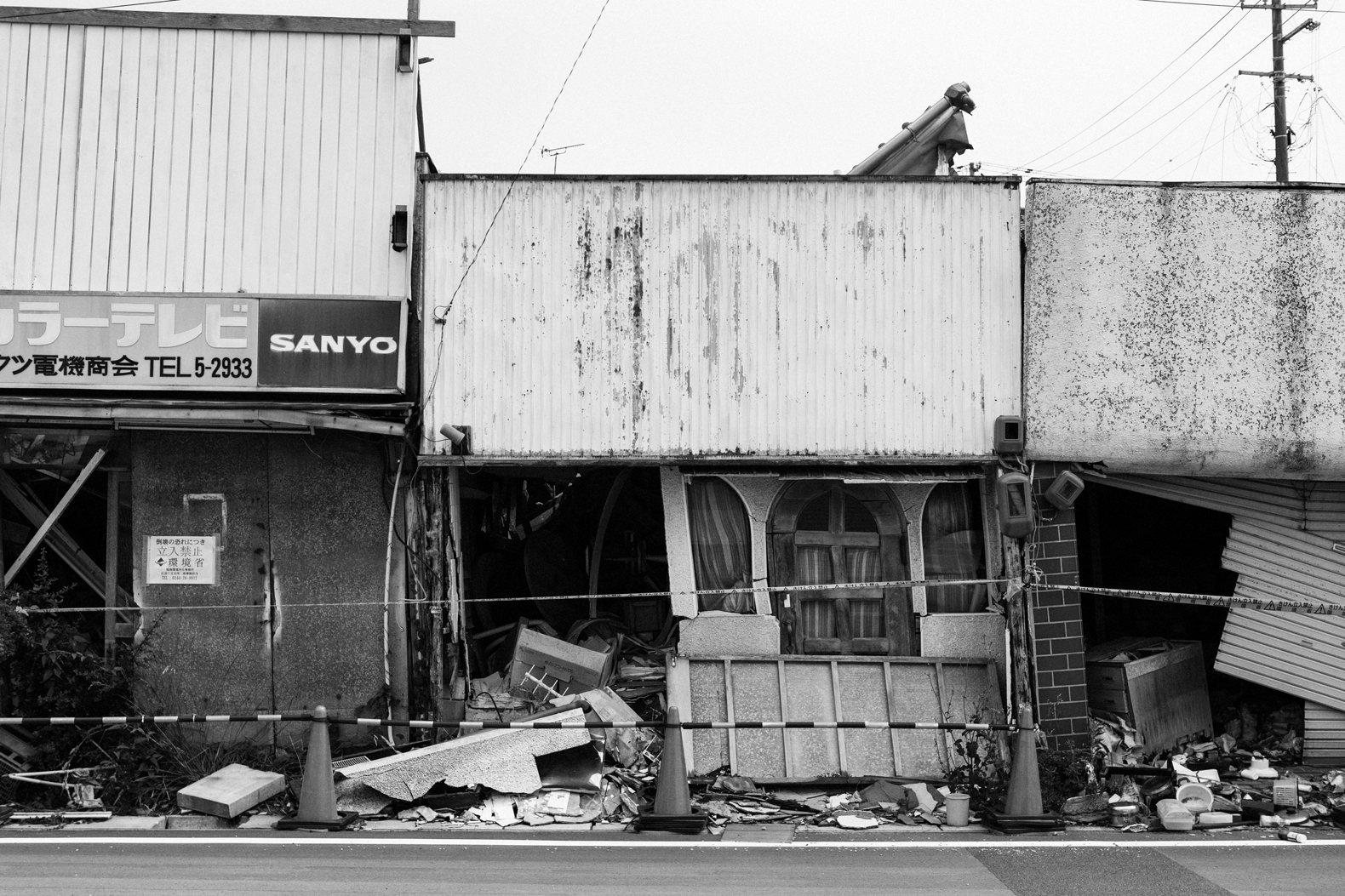 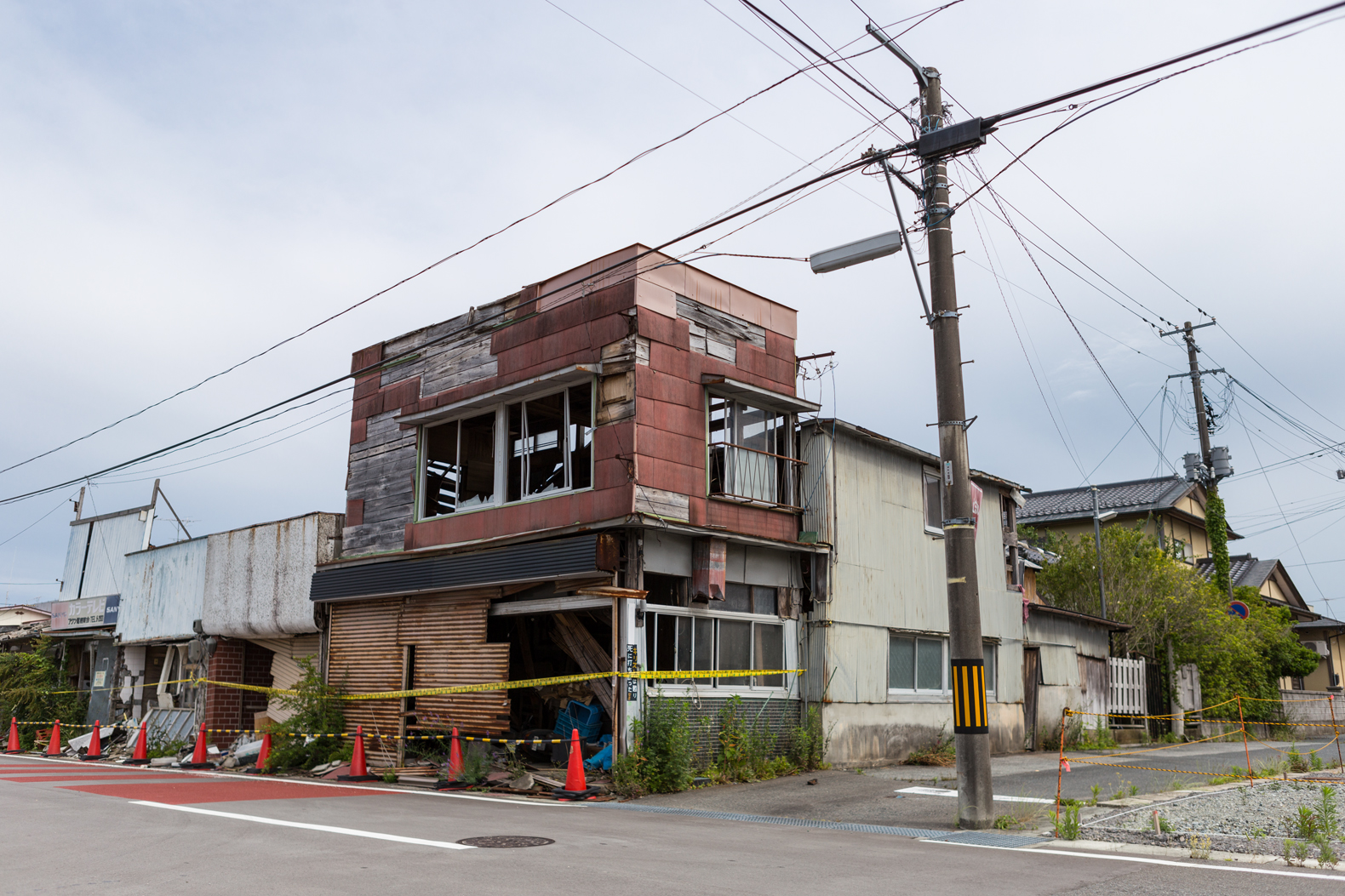 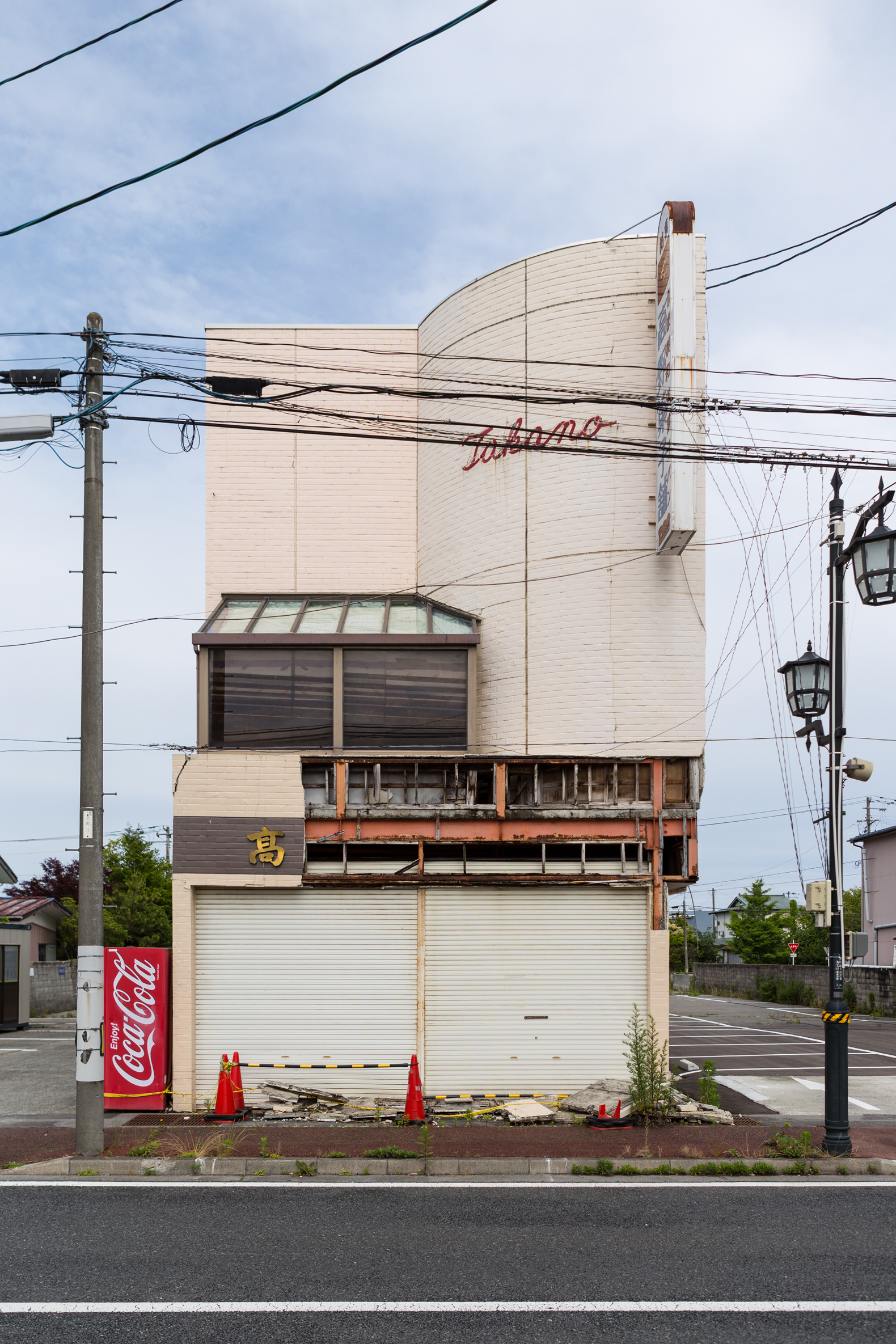 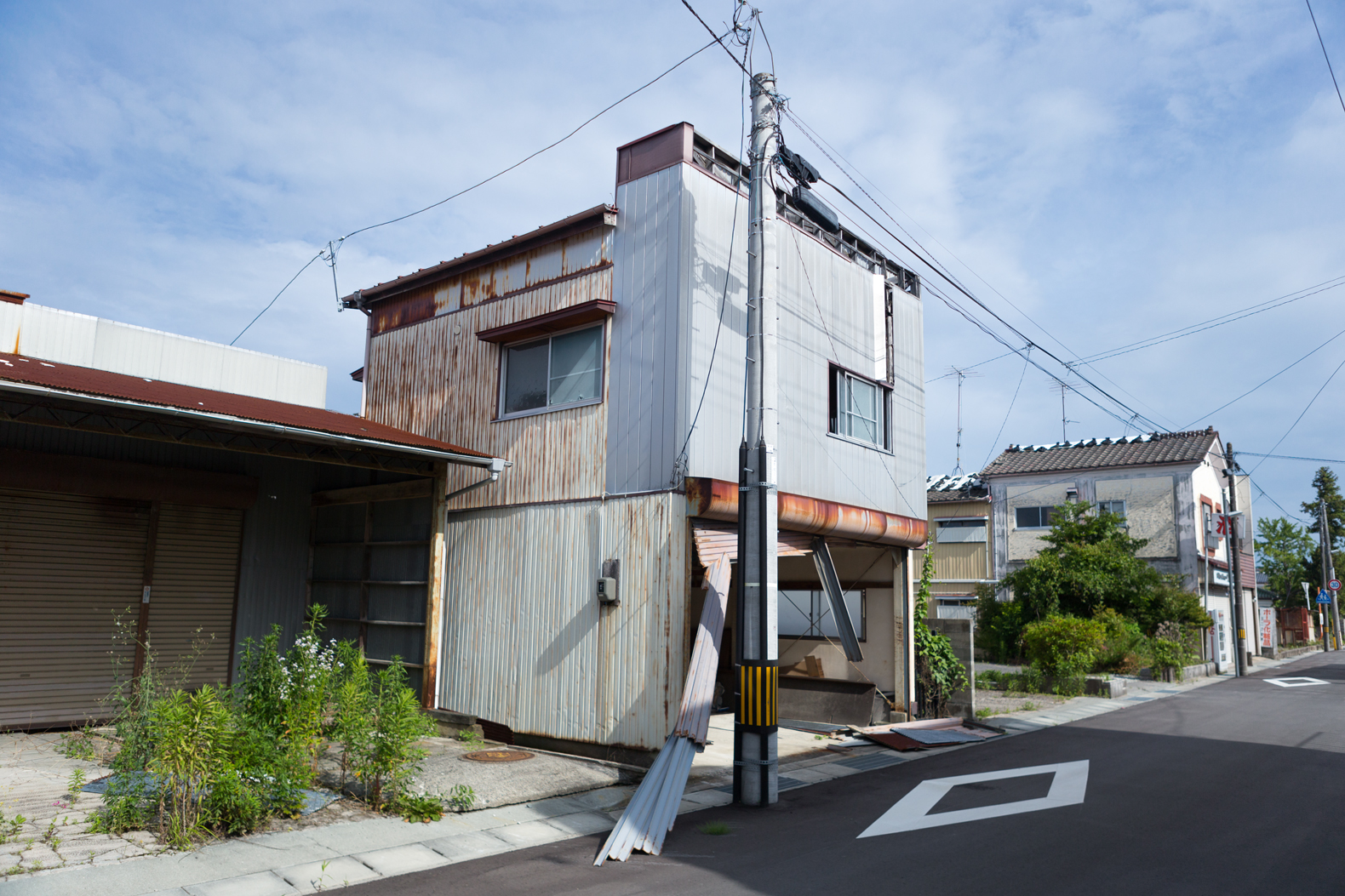 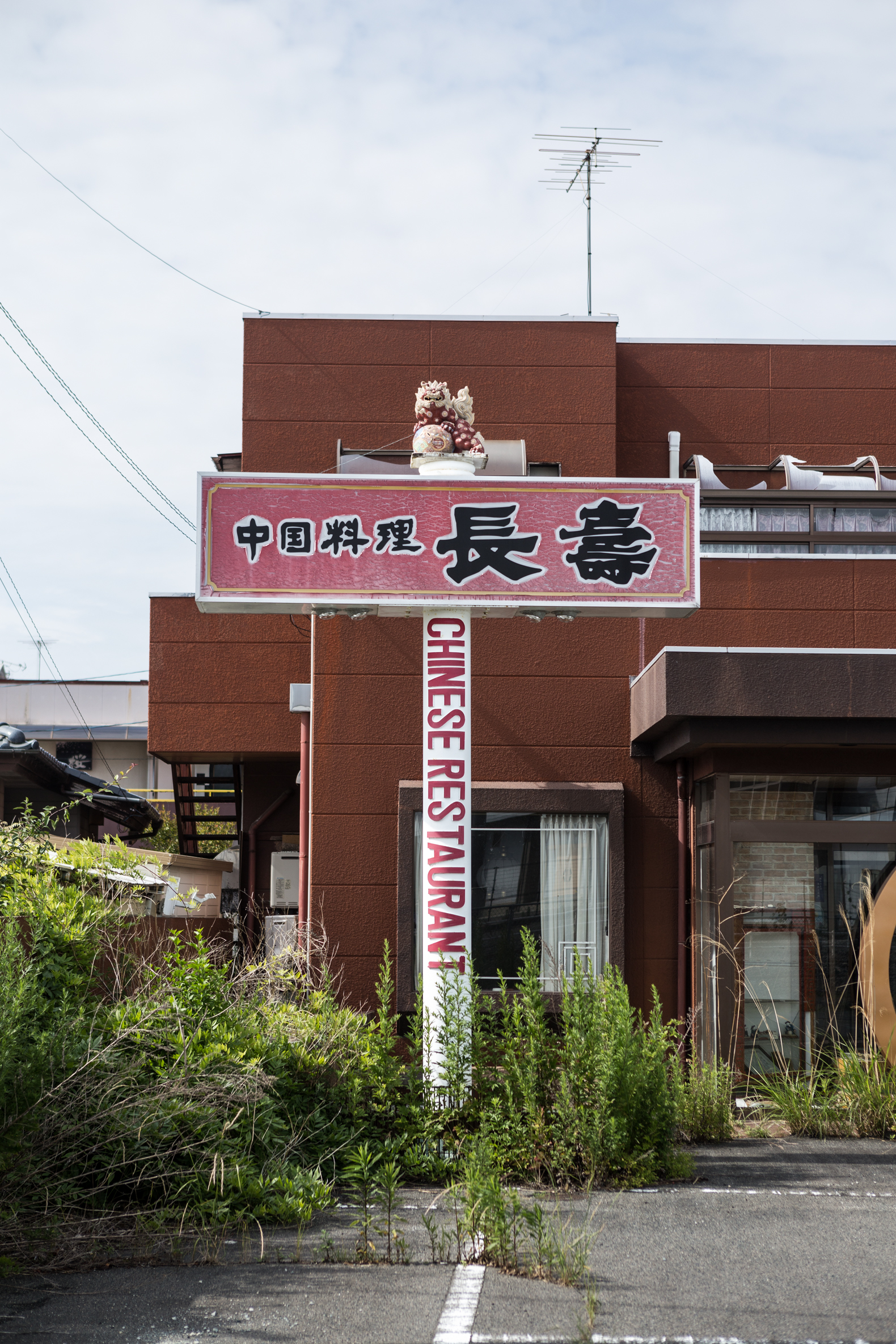 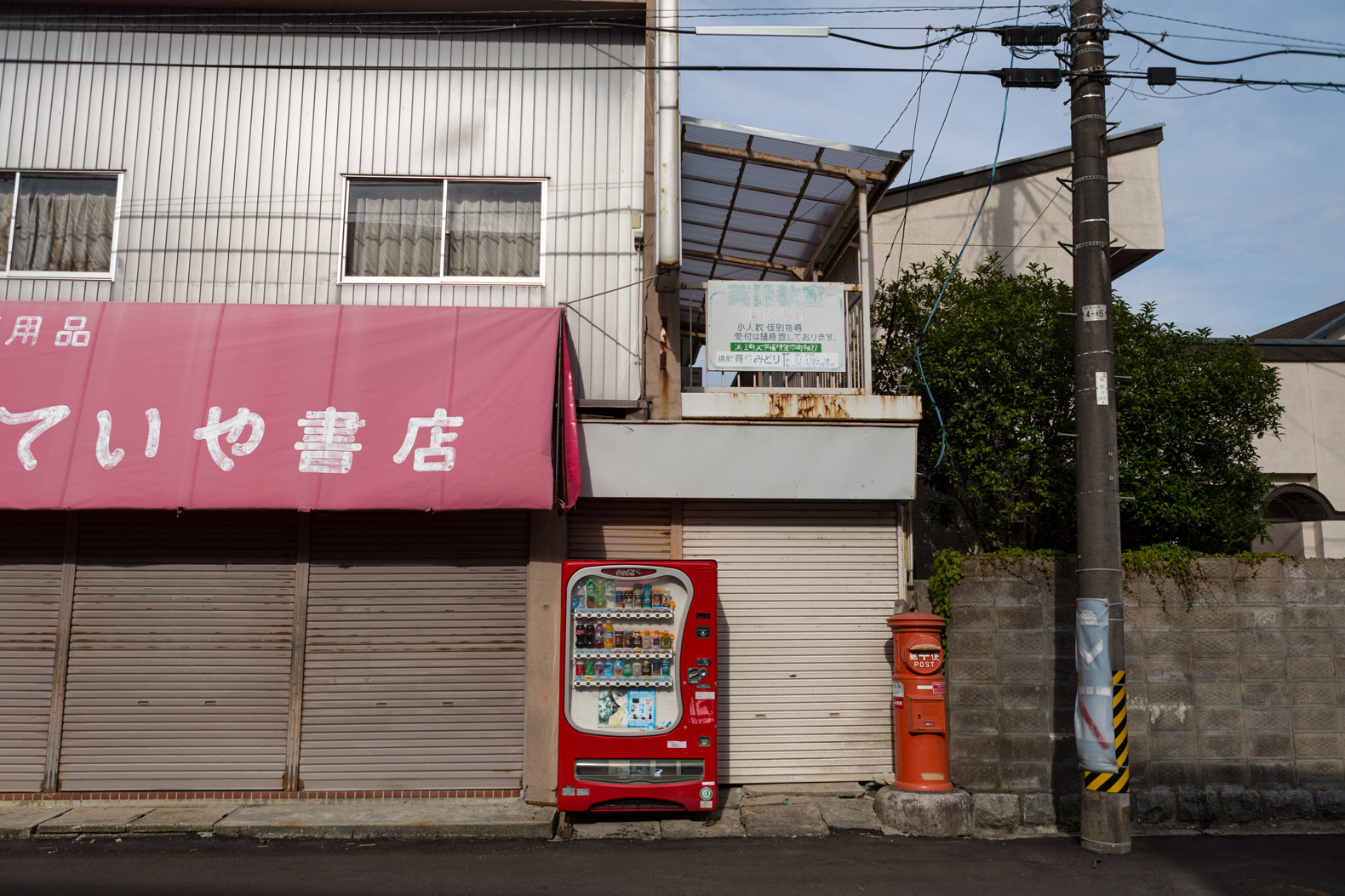 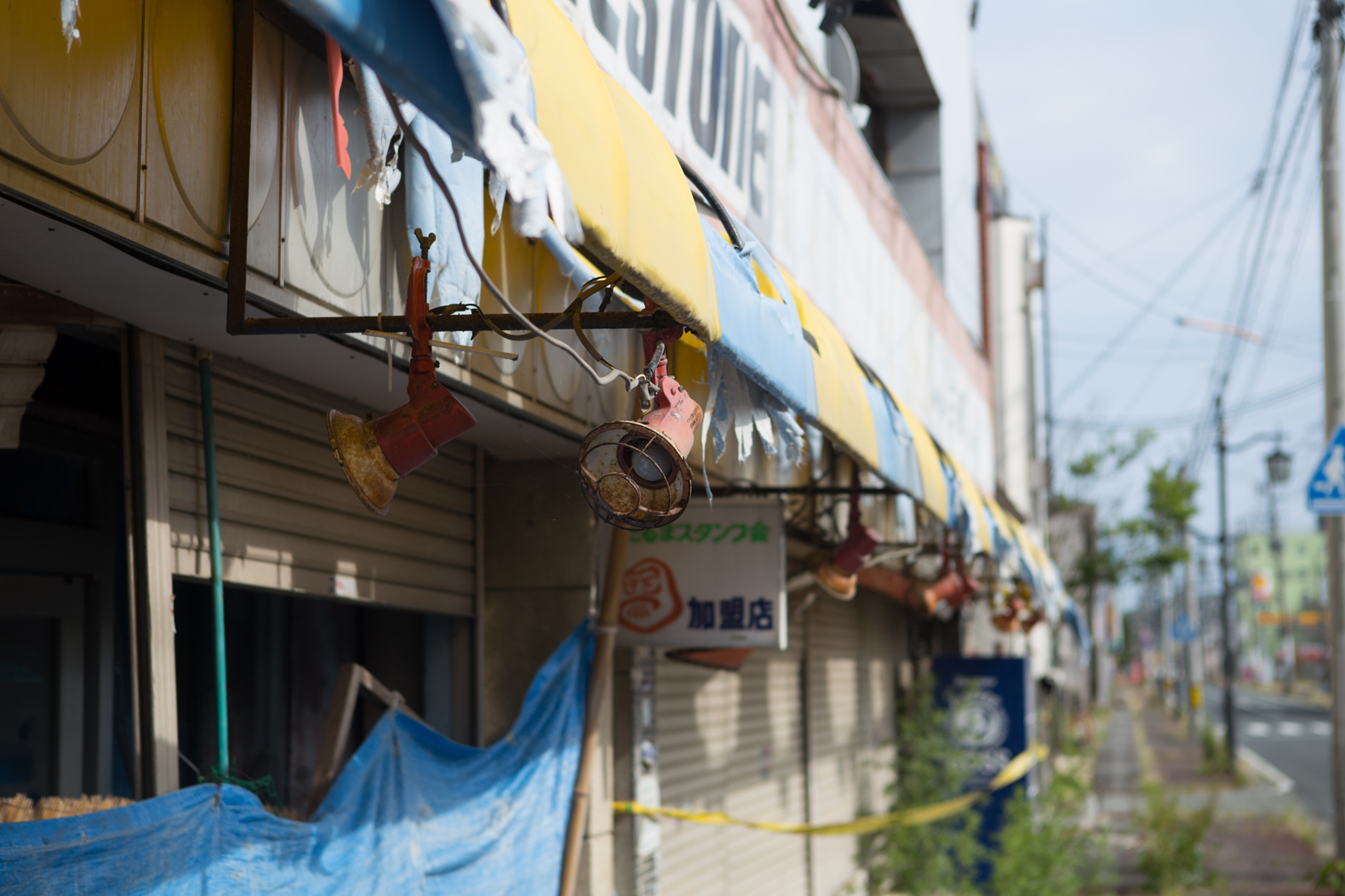 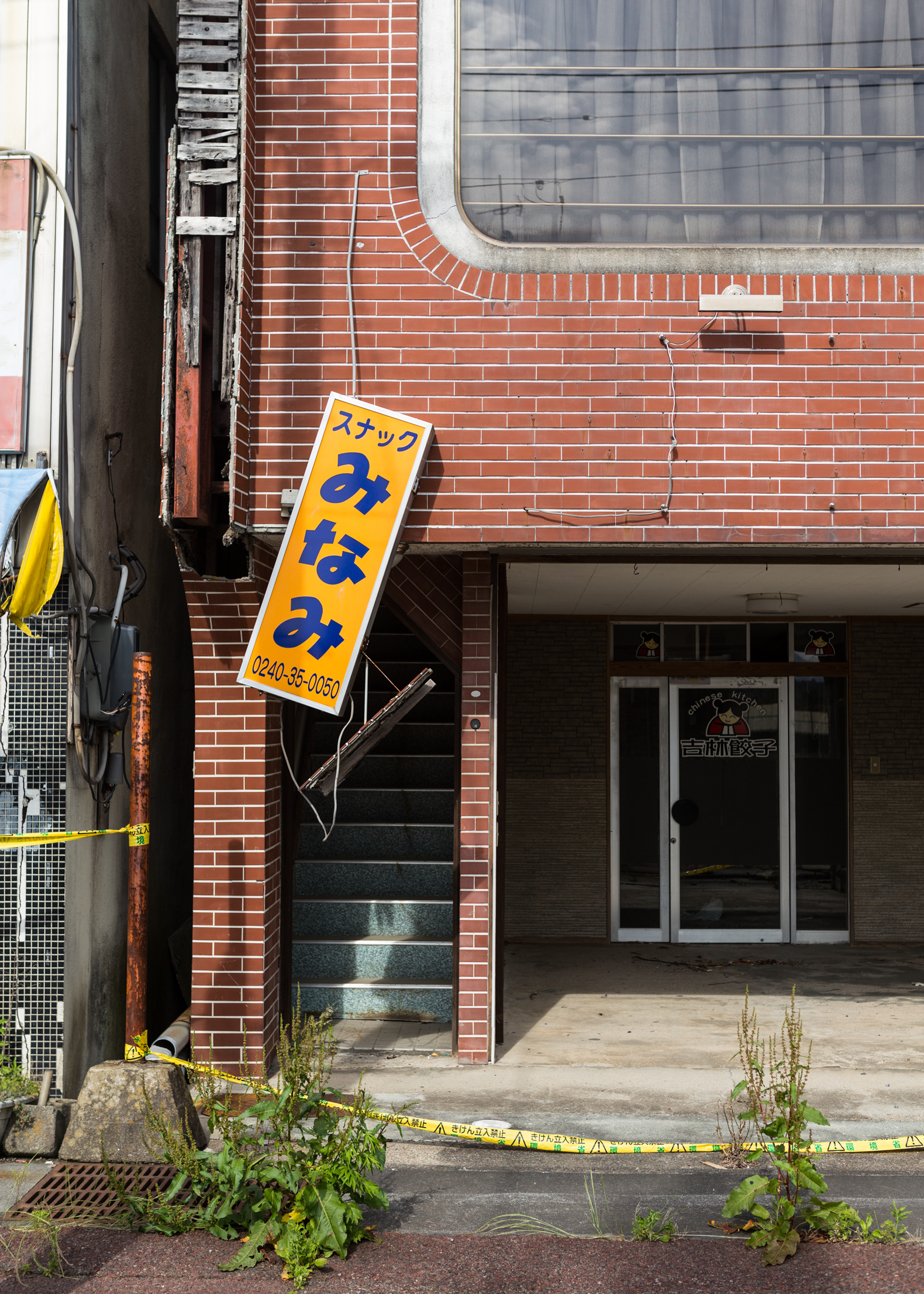 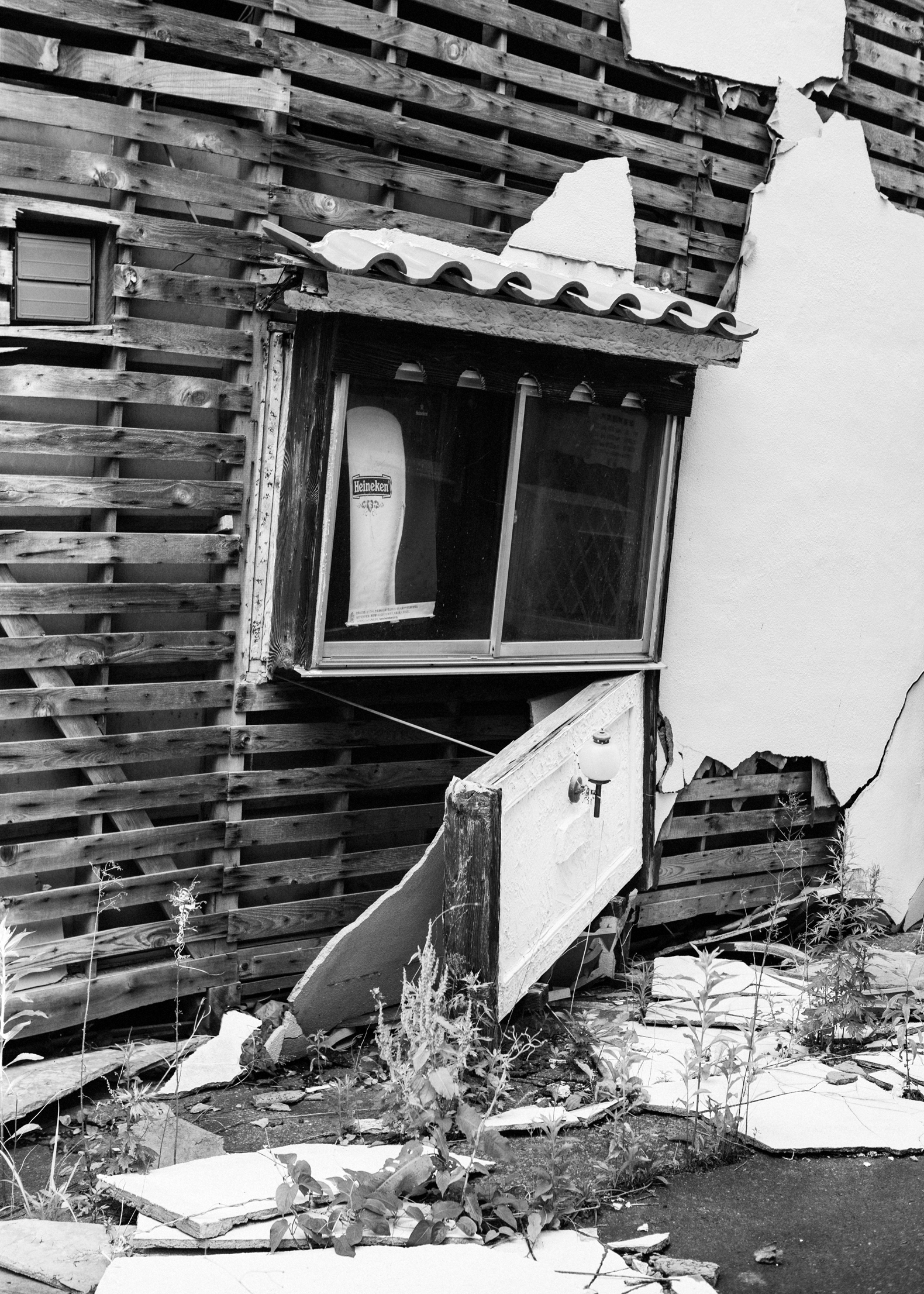 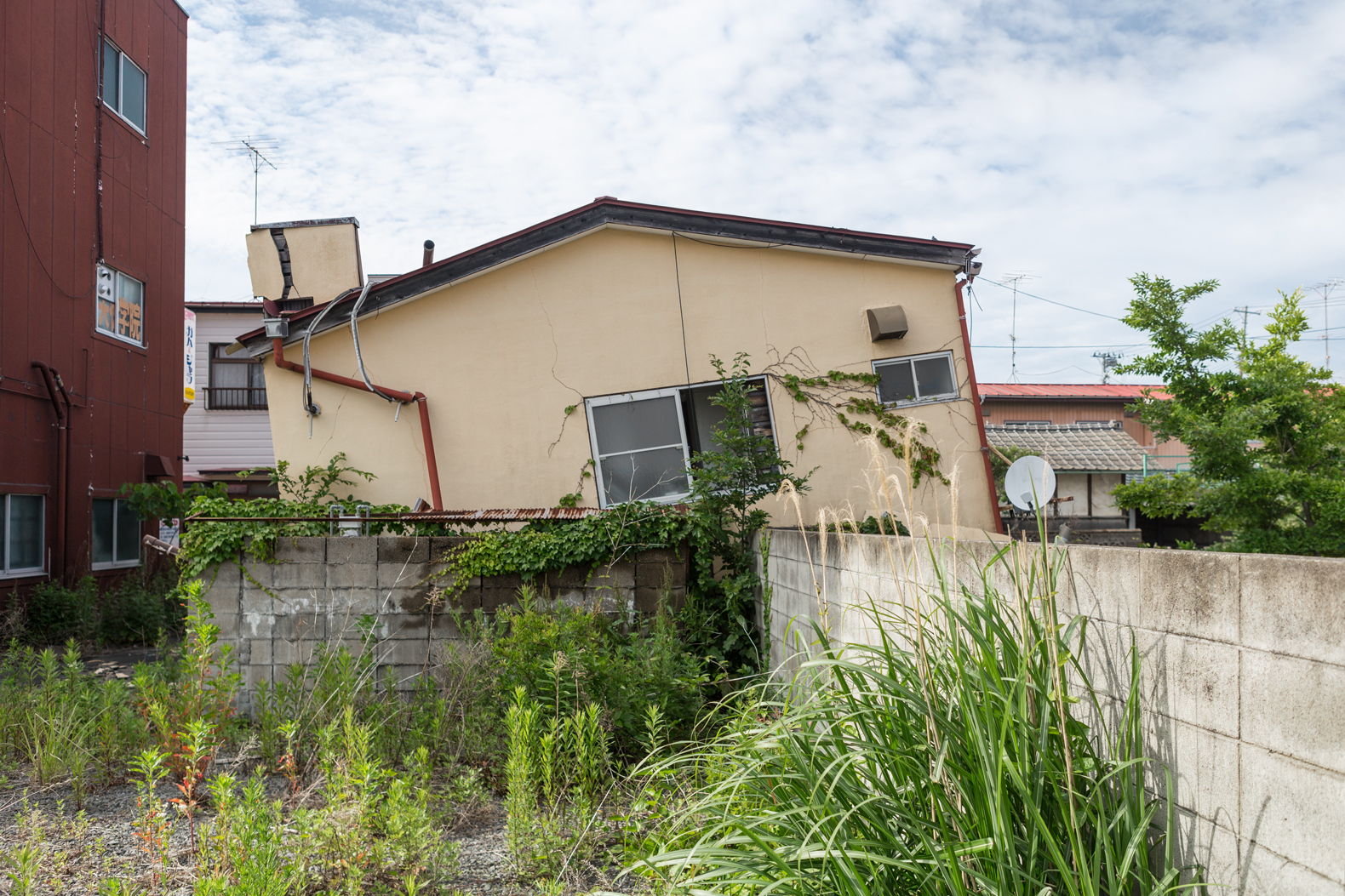 Six years is not that long. There’s lots of stores that have older signs, there’s lots of cars older than that. So walking to Namie is kind of a mindfuck. In some places it looks like people were there yesterday. In other places, it’s very clear that disaster struck. Repeatedly, I think: “Hey, there’s people here!” But then I check again, and the flat tires and high grass tell me that this nice, shiny car has been here for a long, long time. 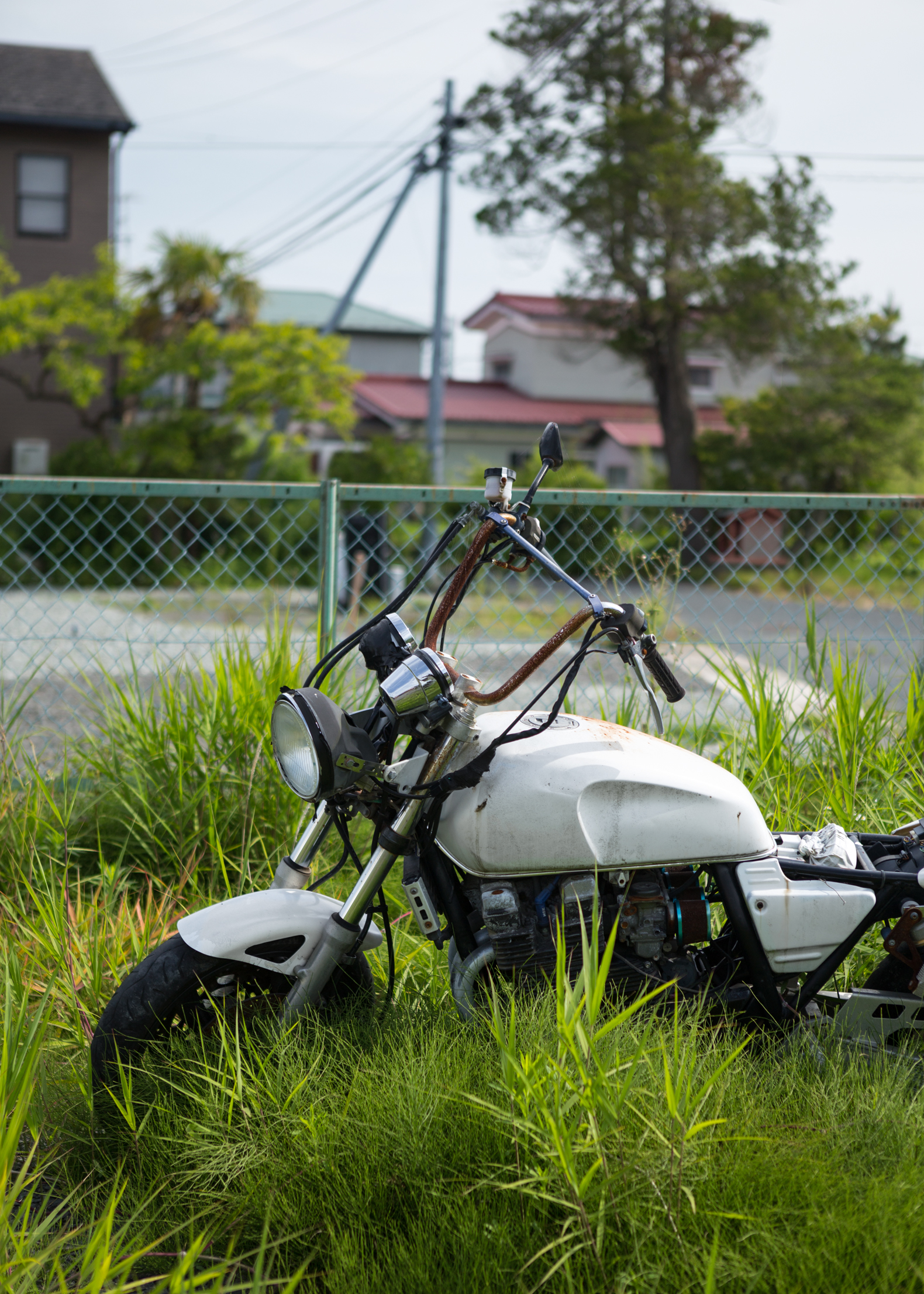 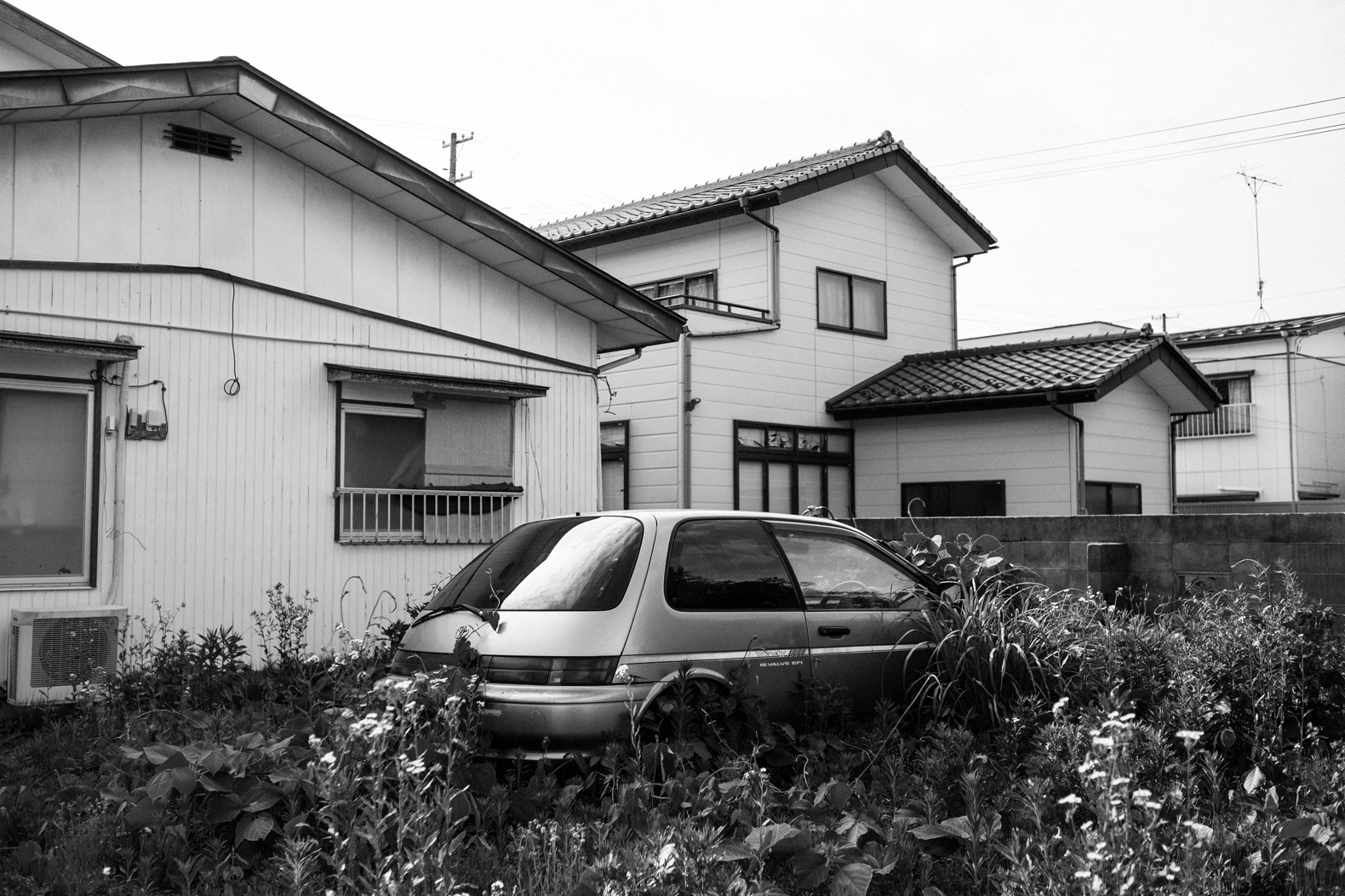 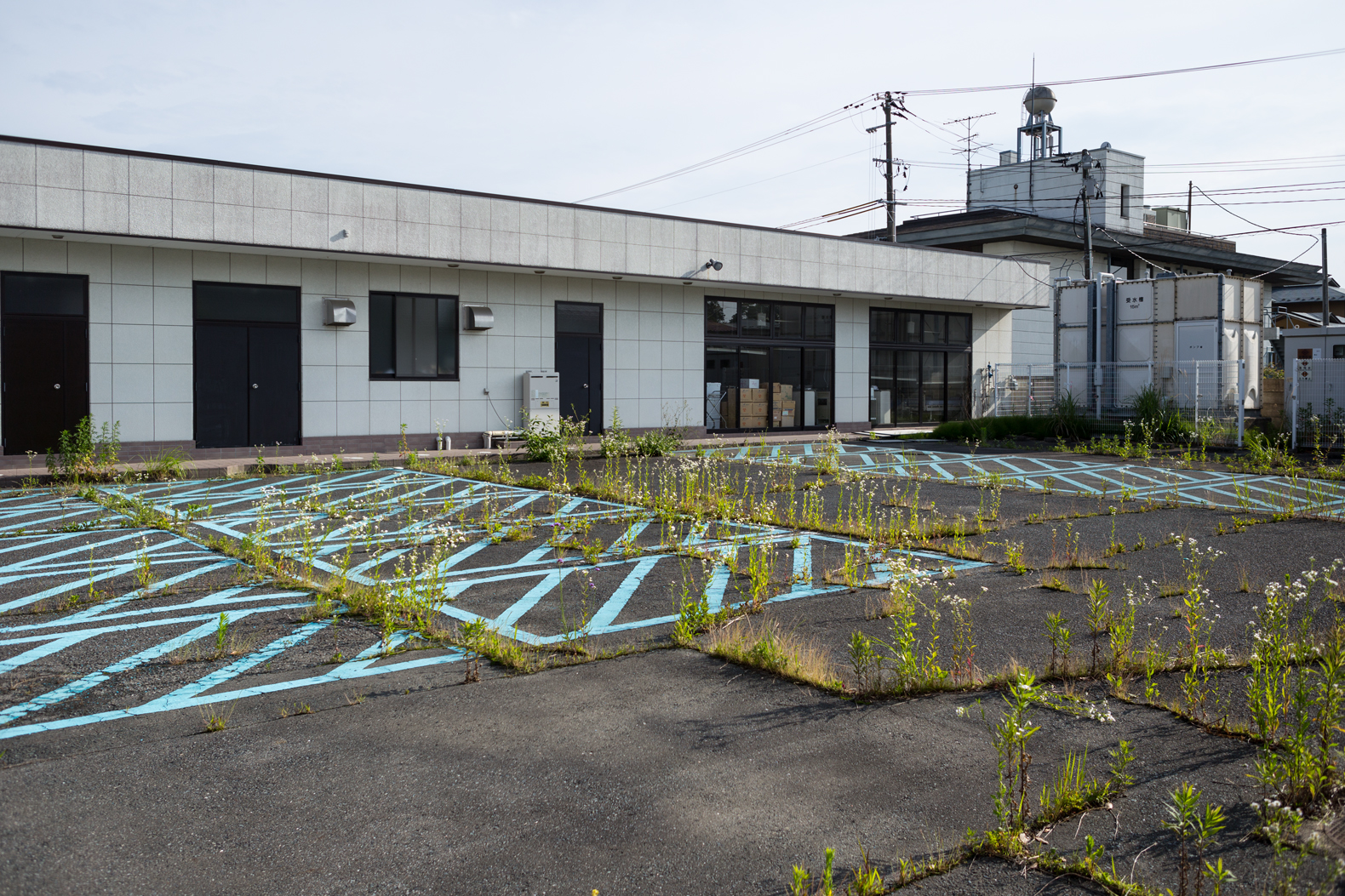 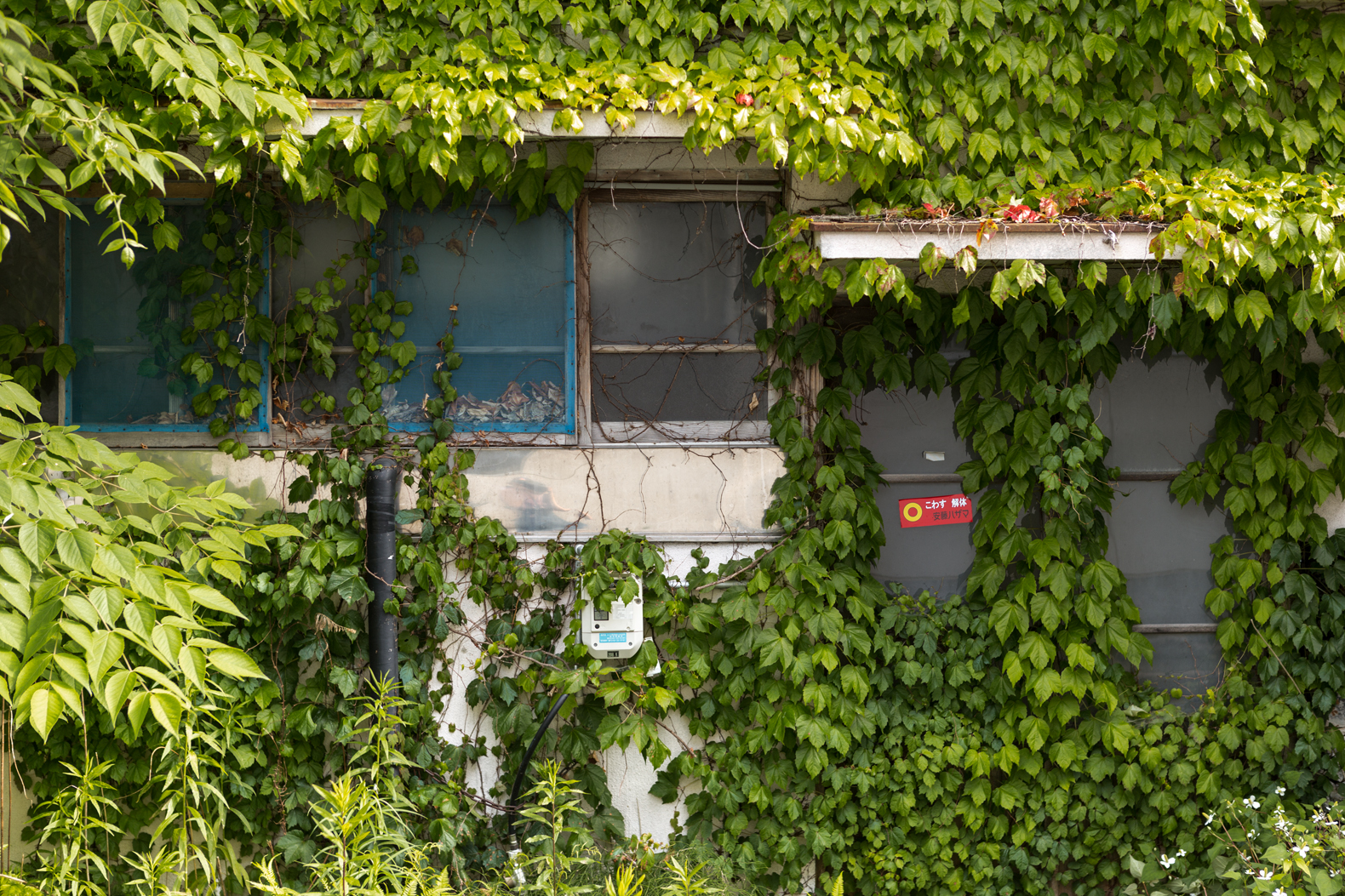 I walked past a building with scaffolding up, but the rusty paint cans reveal that this construcion work hasn’t been recent. And you know, those crumbling facades, where you can see the woodwork appear… We all know that look. But we know it from Disneyland, where these effects are used in the cute Wild West village. That this is reality, when an earthquake, a tsunami and six years of abandonment destroy a town, had to sink in for a while. 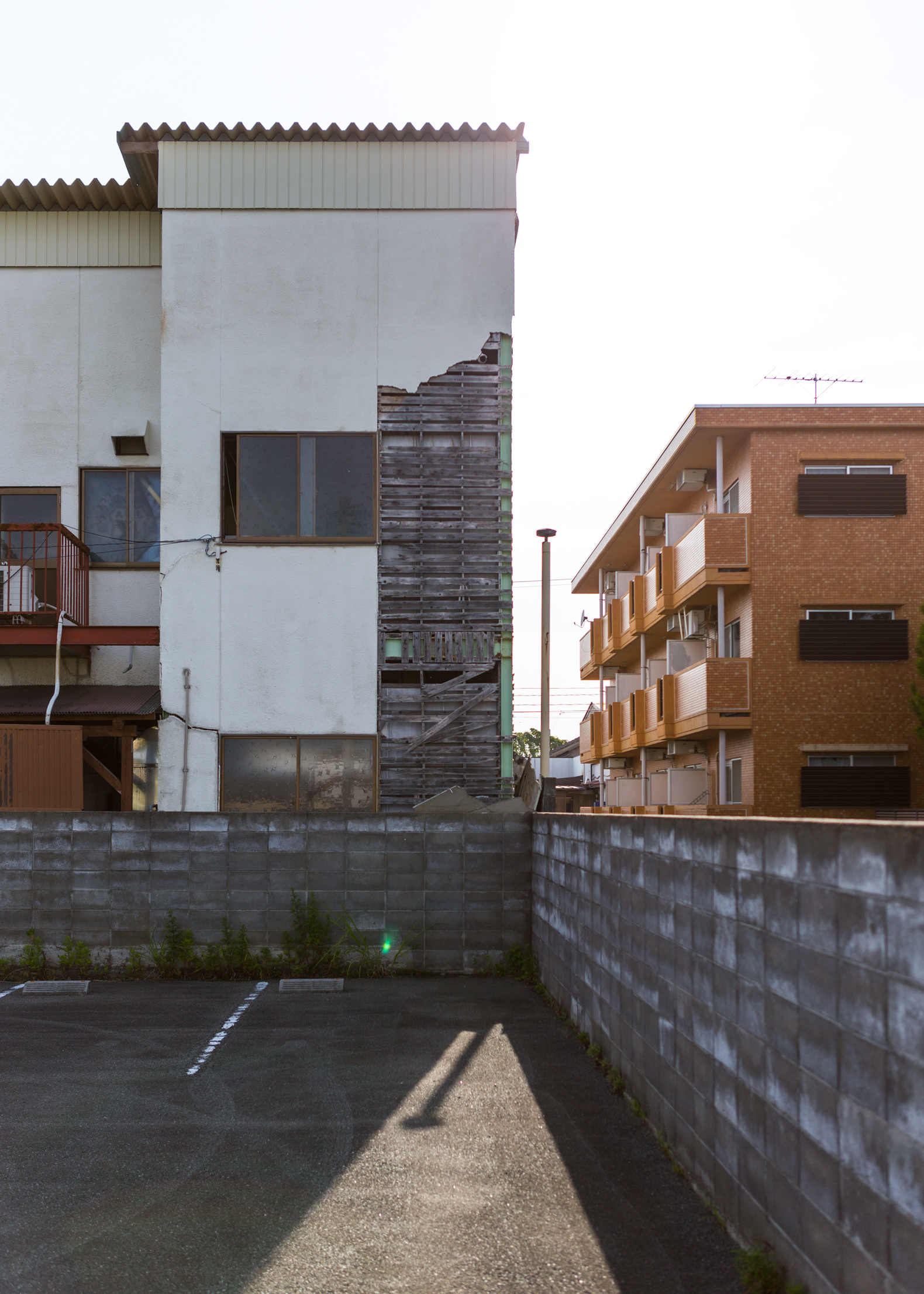 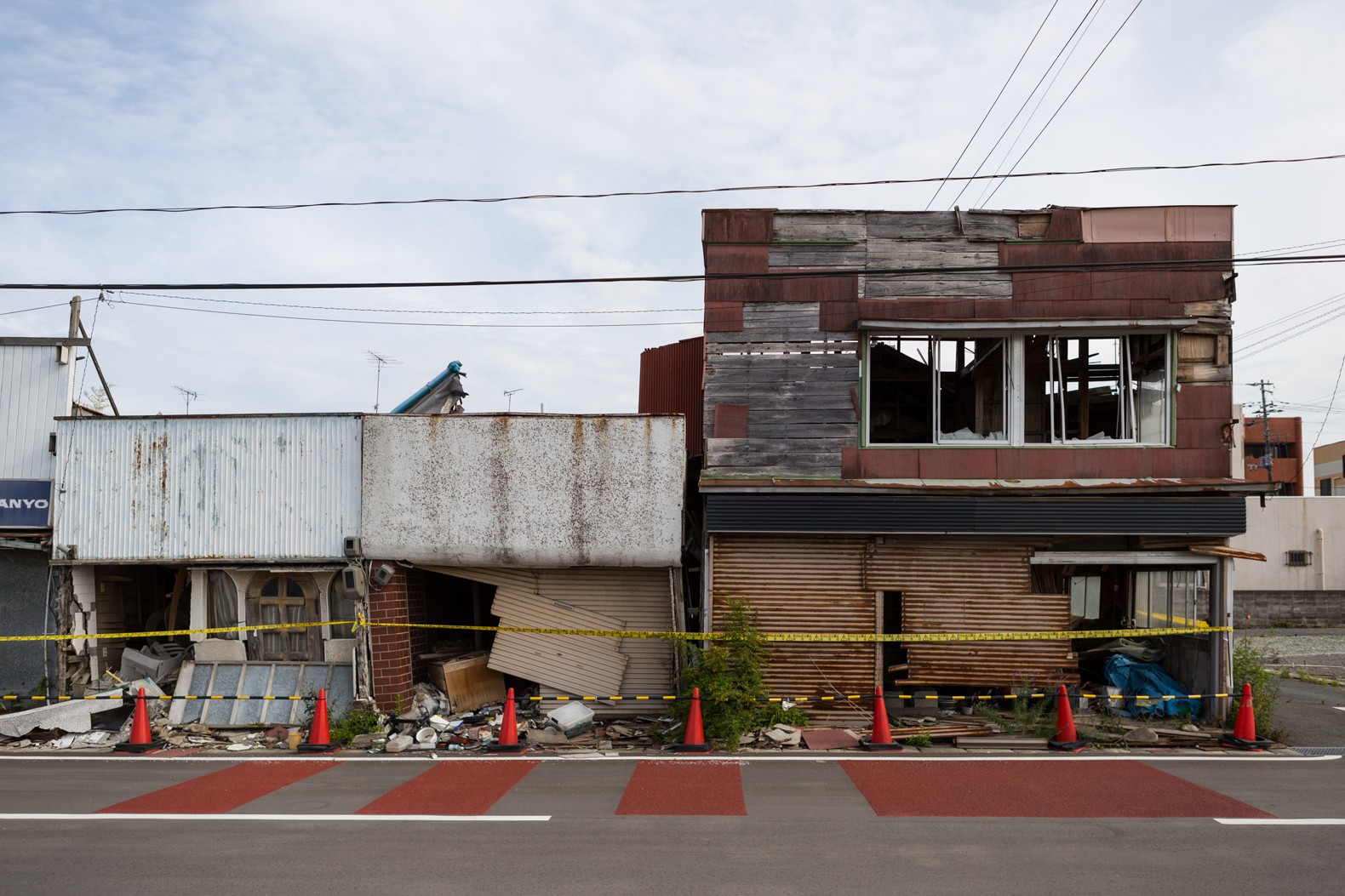 It’s very quiet. I hear some birds, and sometimes the sound of banging metal shakes me up. It turns out to be the sound of broken shutters, waving in the wind. Now and then, a van drives by; men with helmets are working hard to rebuild the village.

Then all of a sudden, I see flags waving. “Eh? Something is open over there?!” Right across a row of dangerously instable houses, a brand new post office has opened. An old lady on her bike comes to post a letter. For one moment, life in Namie appears to be back to normal. 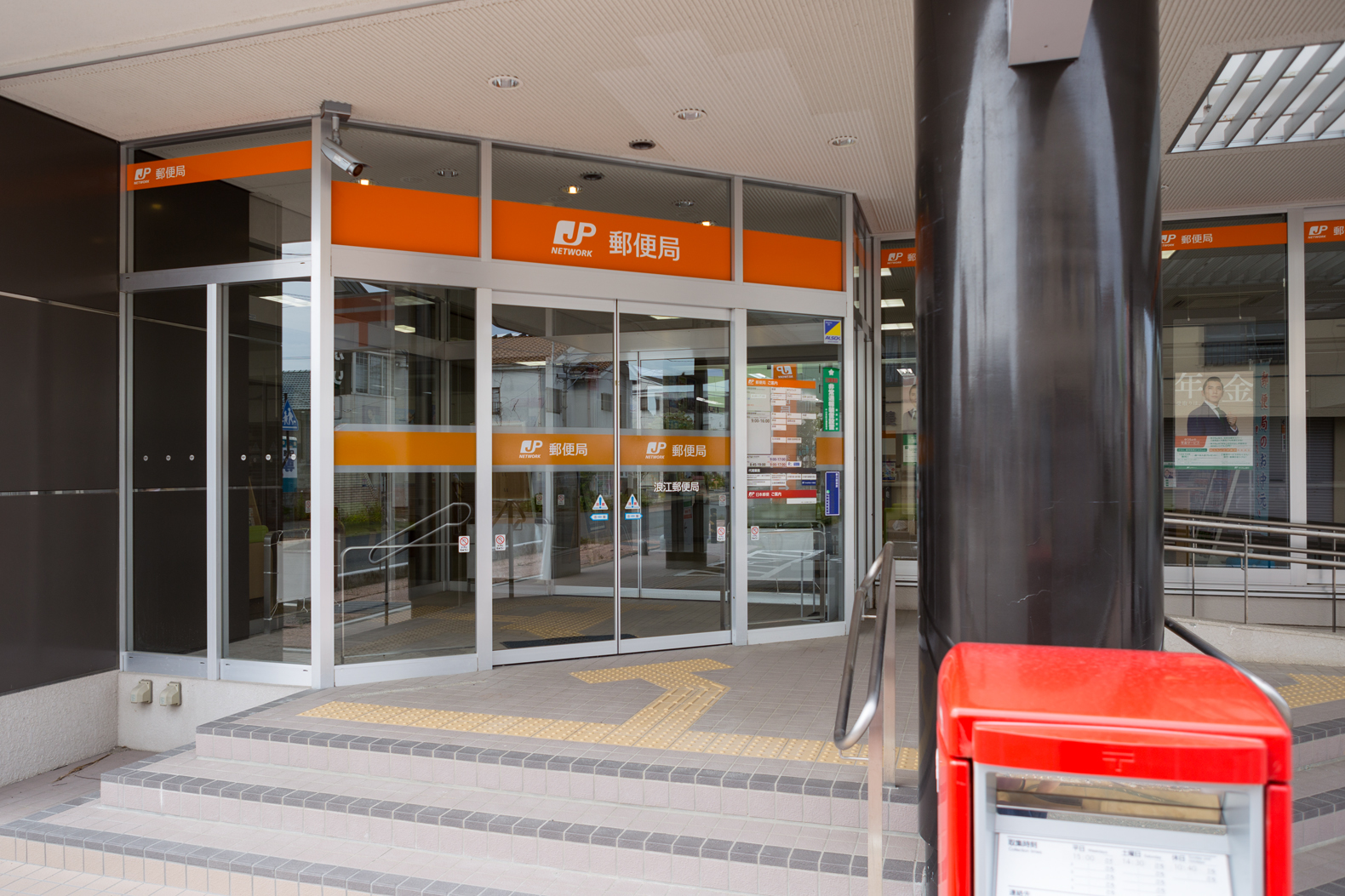 But only the elderly return. Some miss the town they grew up in. Others don’t really have a choice. A year from now, the evacuation and relocation benefits stop. The old people don’t worry much about the radiation – they’ll be dead soon anyway. The young families on the other hand… 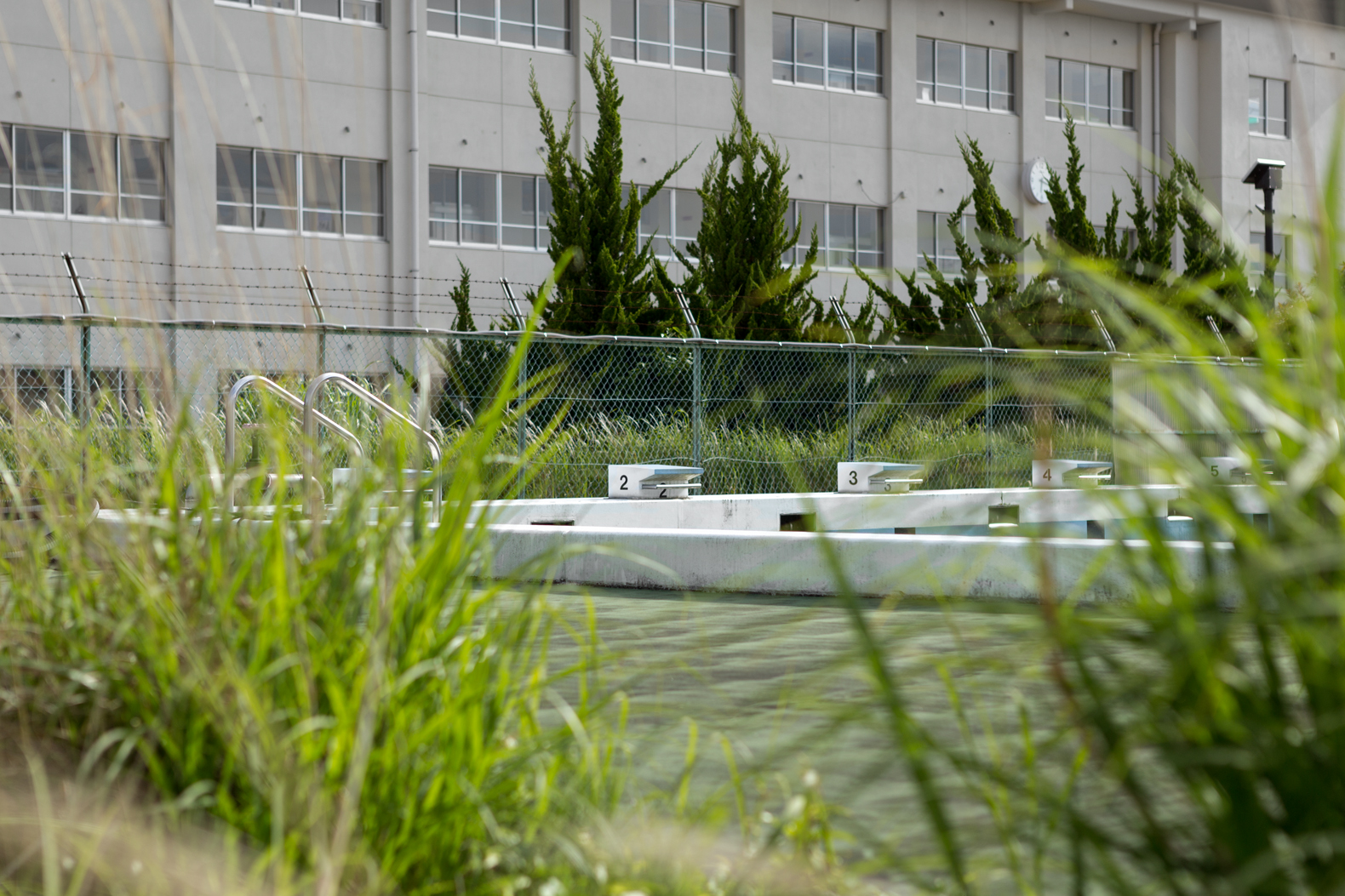 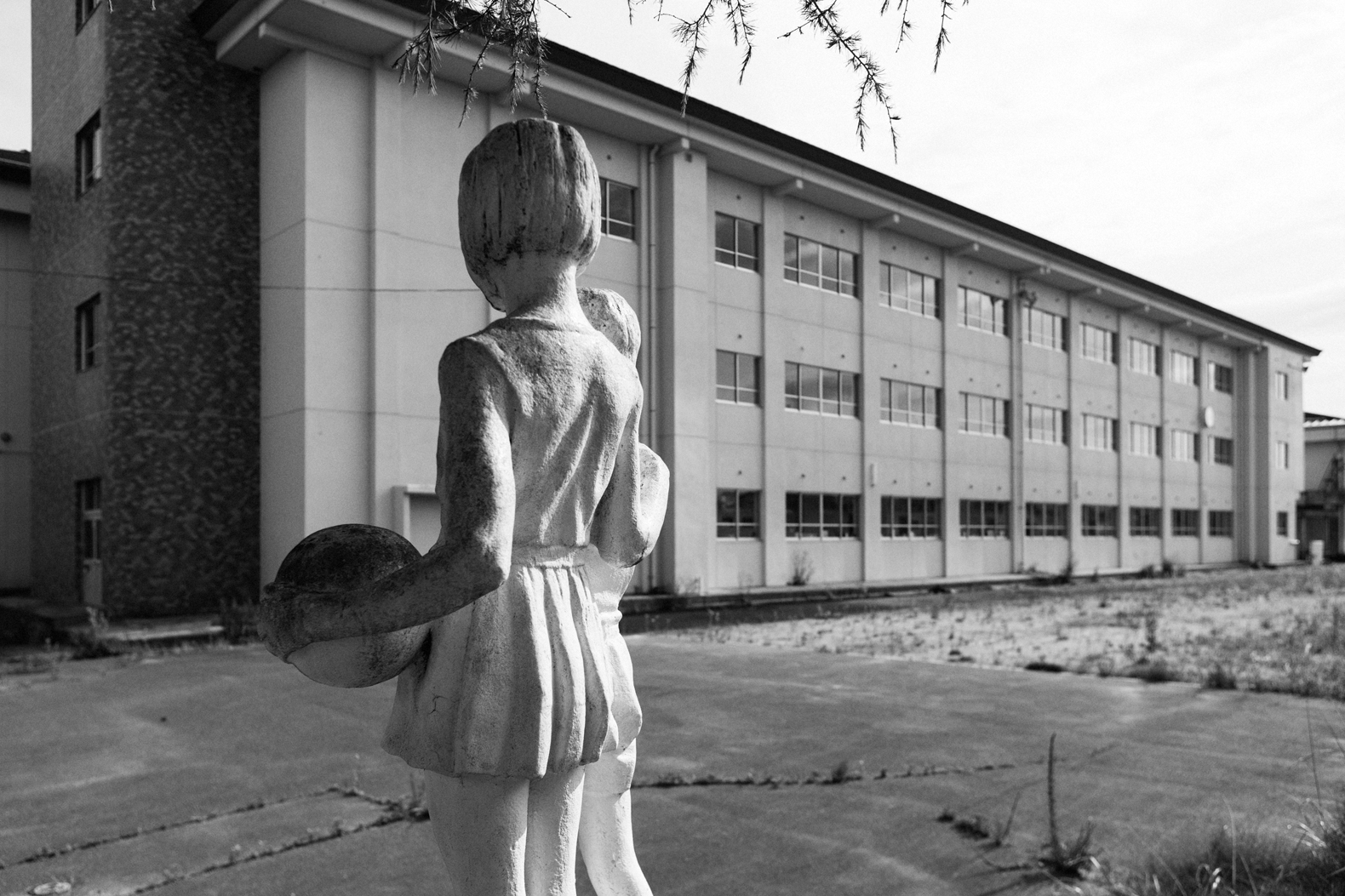 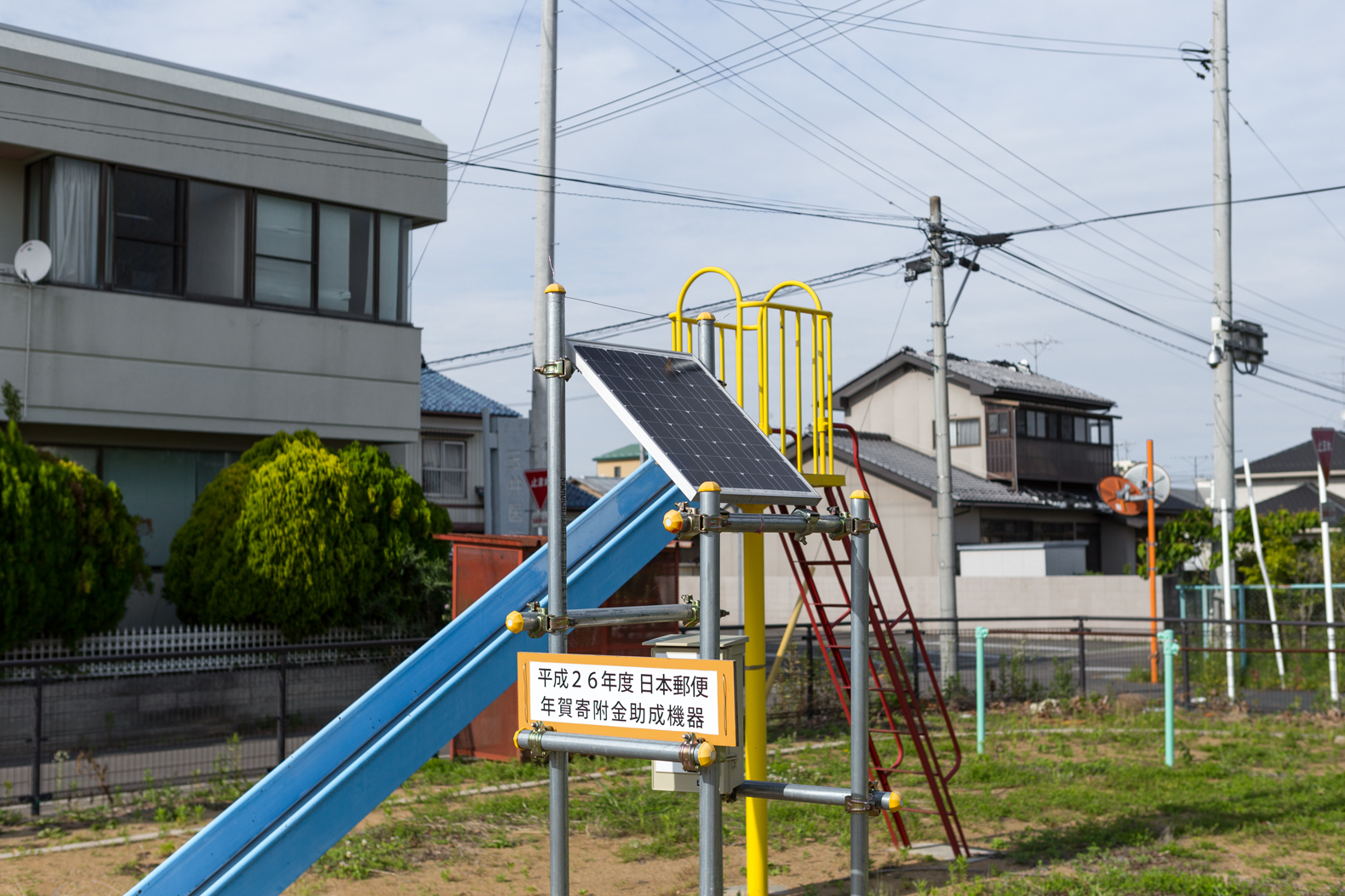 “This radiation meter was a gift from Japan Post.” 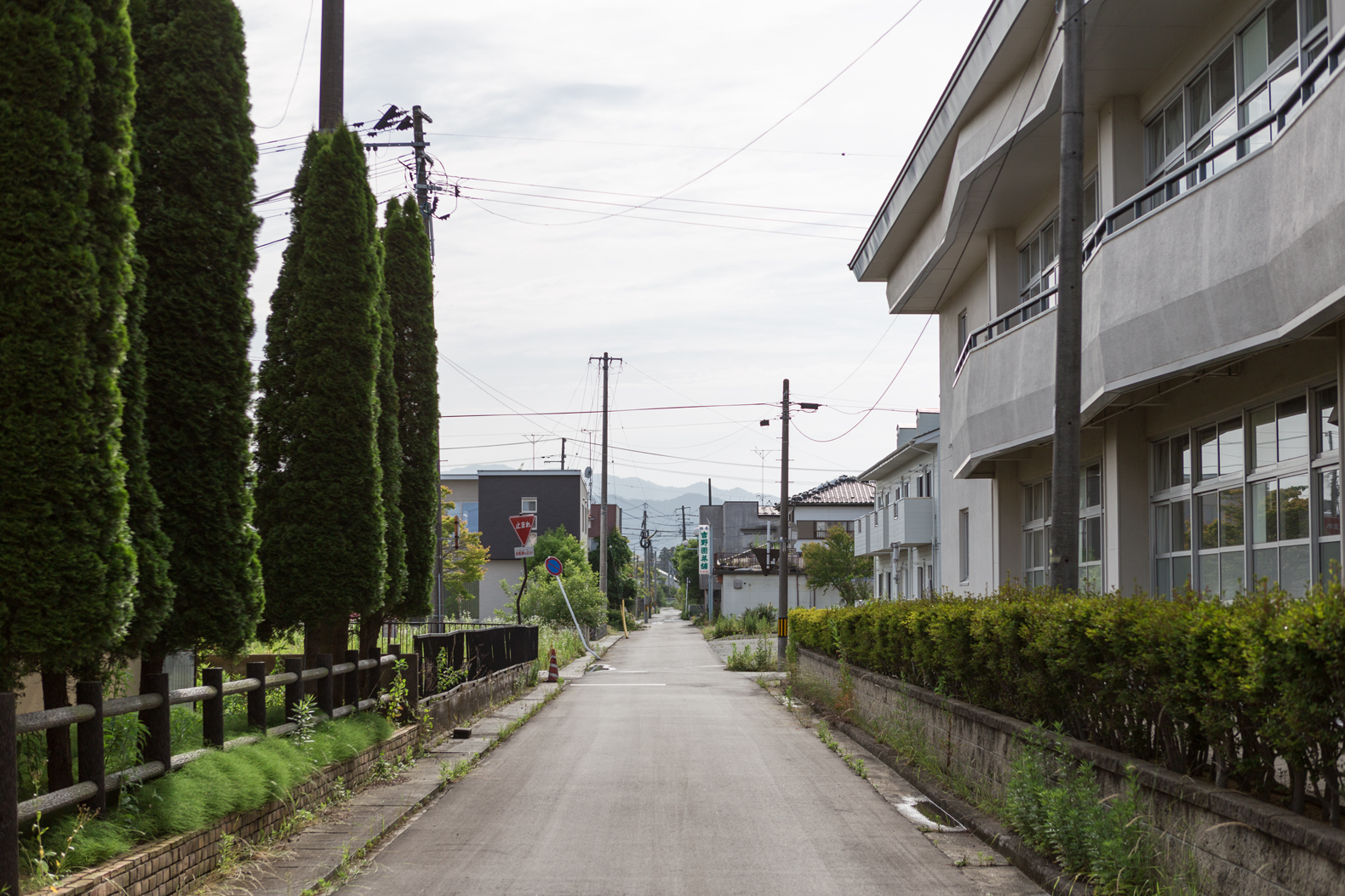 I walk past a school with an open air swimming pool. How nice it must have been, living here. The ocean on one side of town, the mountains on the other. Both are a source of worry now. The sea with it’s tsunami’s, the mountains with their forests full of radioactive dust. The streets of Namie are cleaned, but you can’t clean an entire forest. Just recently, forest fired sparked big worries.

Right next to the train station, there’s a big sports facility that looks almost like it was built after the disaster. That’s not the case, but I do find out that the gym reopened as early as January, even before residents were allowed to spend the night in Namie. “Please use for improving physical strength”, the website says. Admission is free. 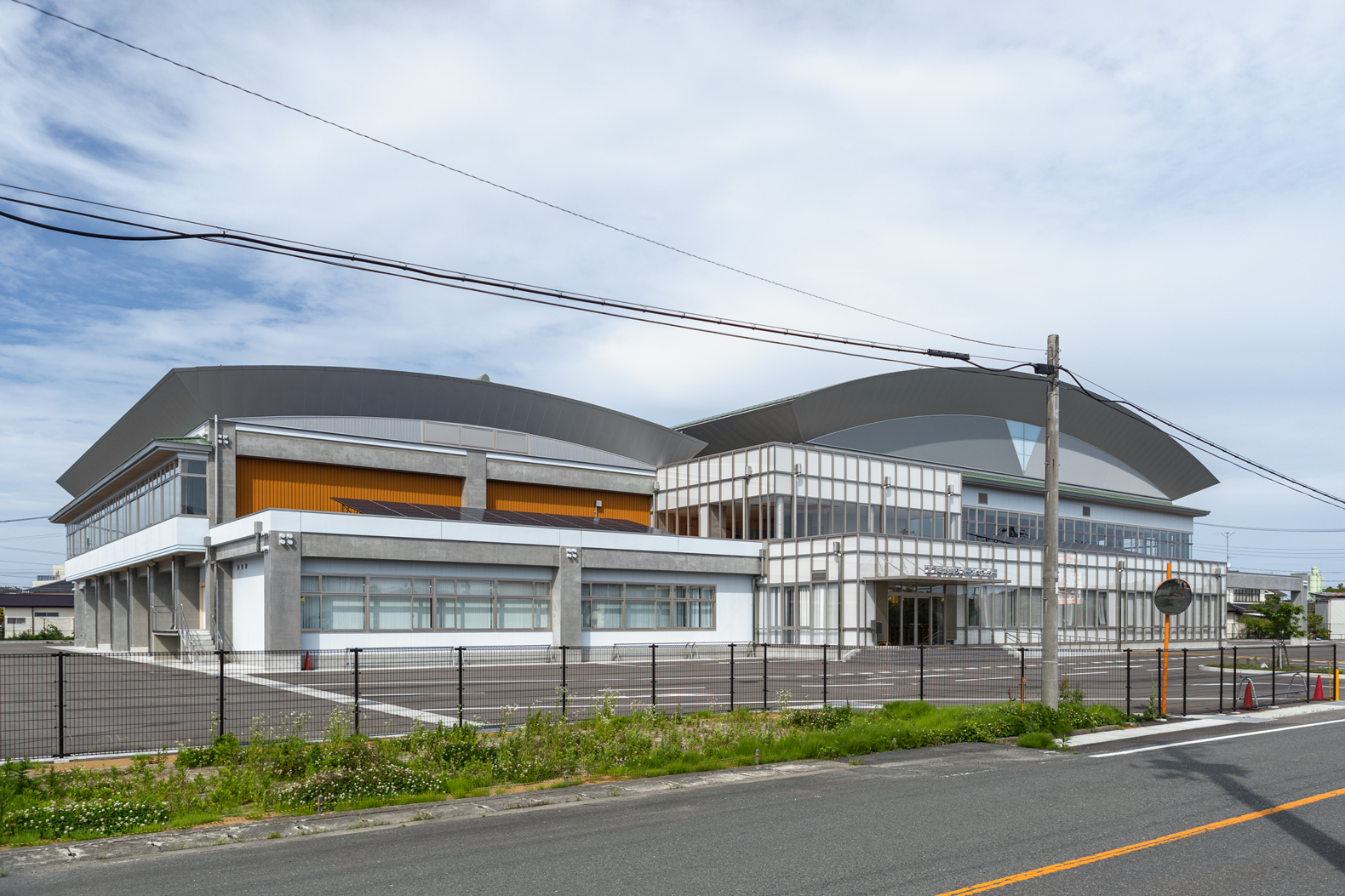 I get it. Facilities are needed to get people to return. A train station, a post office, a gym, a gas station. In the newspaper I read that a school will also reopen soon. They don’t expect more than twenty students. And I get that, too. Who wants to live in a town with a radiation meter next to the playground?

Regardless how hard the government tries, the lack of young families willing to return means Namie is, eventually, doomed. 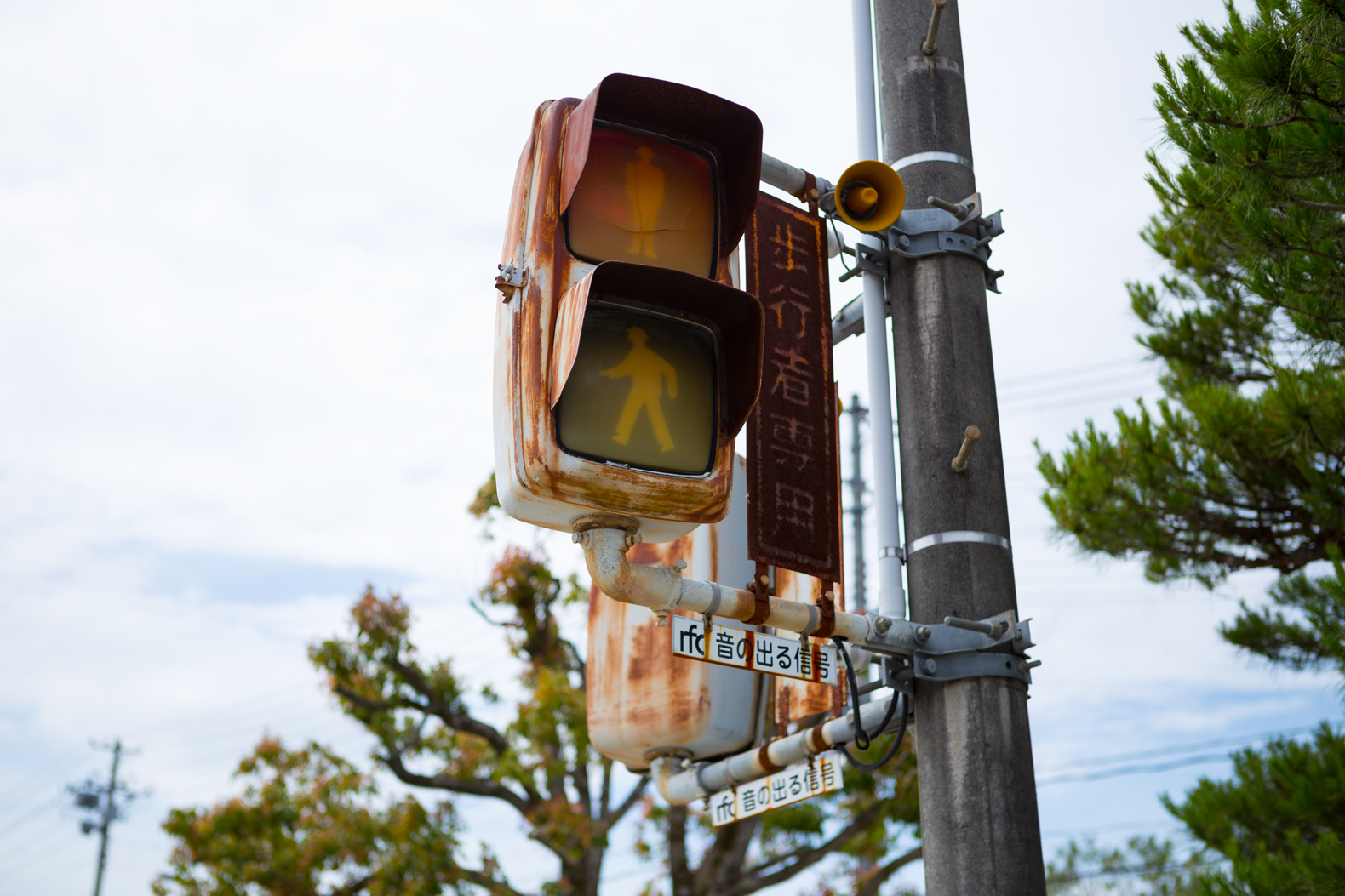 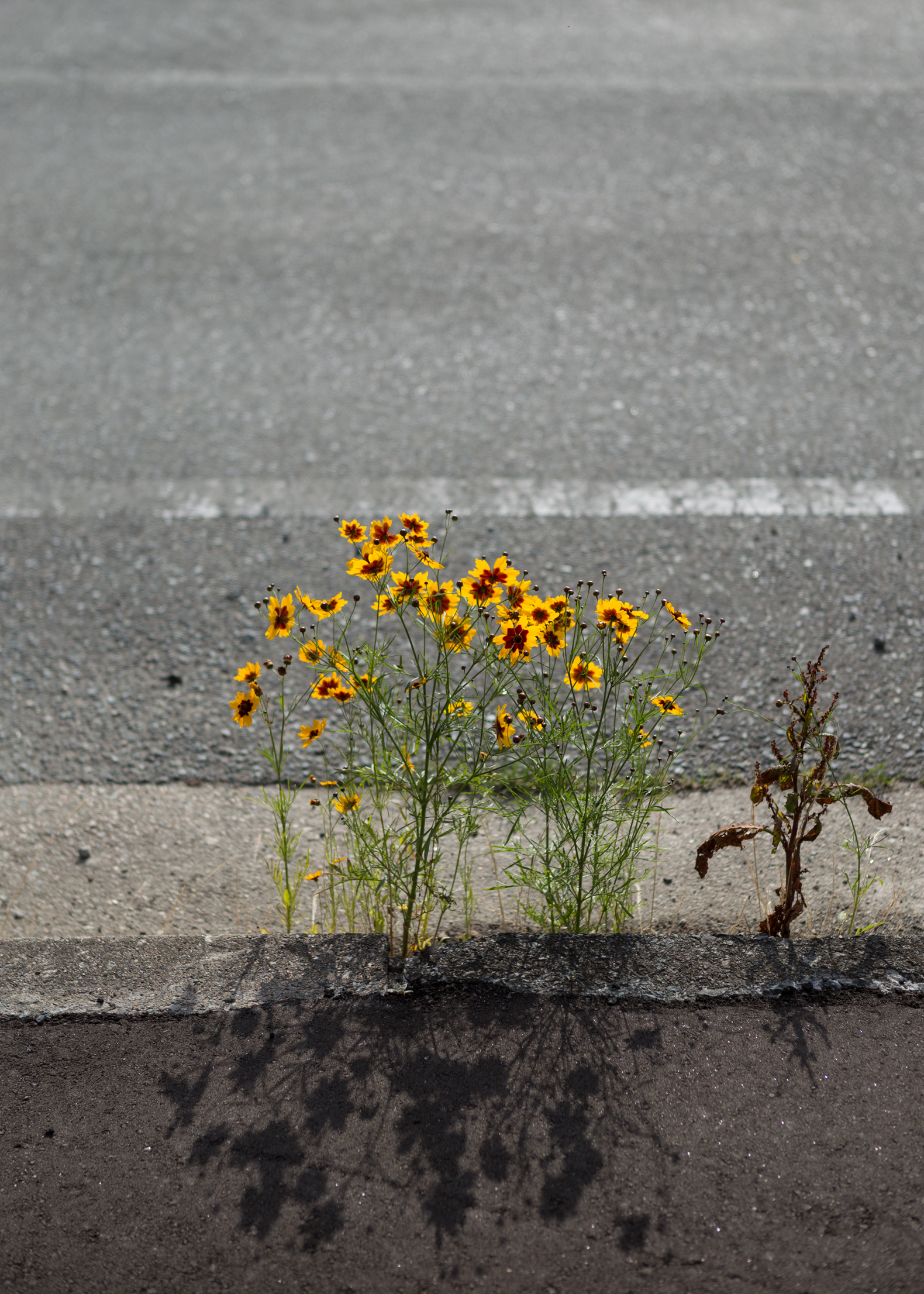 Een reactie op “Who wants to go back to Namie, Fukushima?”