I have to admit something. I fell for clickbait. And not in a way that I clicked on a link and wasted three seconds of my life, no. I spent eight hours on a train yesterday, over an hour today, I spent 20 euros on a taxi and walked an hour for a… Disappointing bridge.

Disappointing, even though it went viral with headlines such as “Bridge… or rollercoaster? Japan’s terrifying road is enough to give the most confident driver nightmares“, and descriptions by clickety-clickbaiting websites such as “basically a highway to outer space, a shortcut to vomiting from nausea, making driving over this thing one seriously thrilling car ride. It’s one of the most spectacular bridges in the world.“ Right, I should’ve known better than to trust the Daily Mail, but still.

We took a taxi from the local airport, over the bridge to the Family Mart (convenience store) at the foot of the bridge and we planned on walking back towards the nearest train station. A bit of extra information here: this bridge is located in an industrial area, with some small farming on the other side, and a train station consisting of a small platform and a bench, with a cute small train running only once an hour. The Family Mart looked more like a truck stop, little bigger than your average gas station. 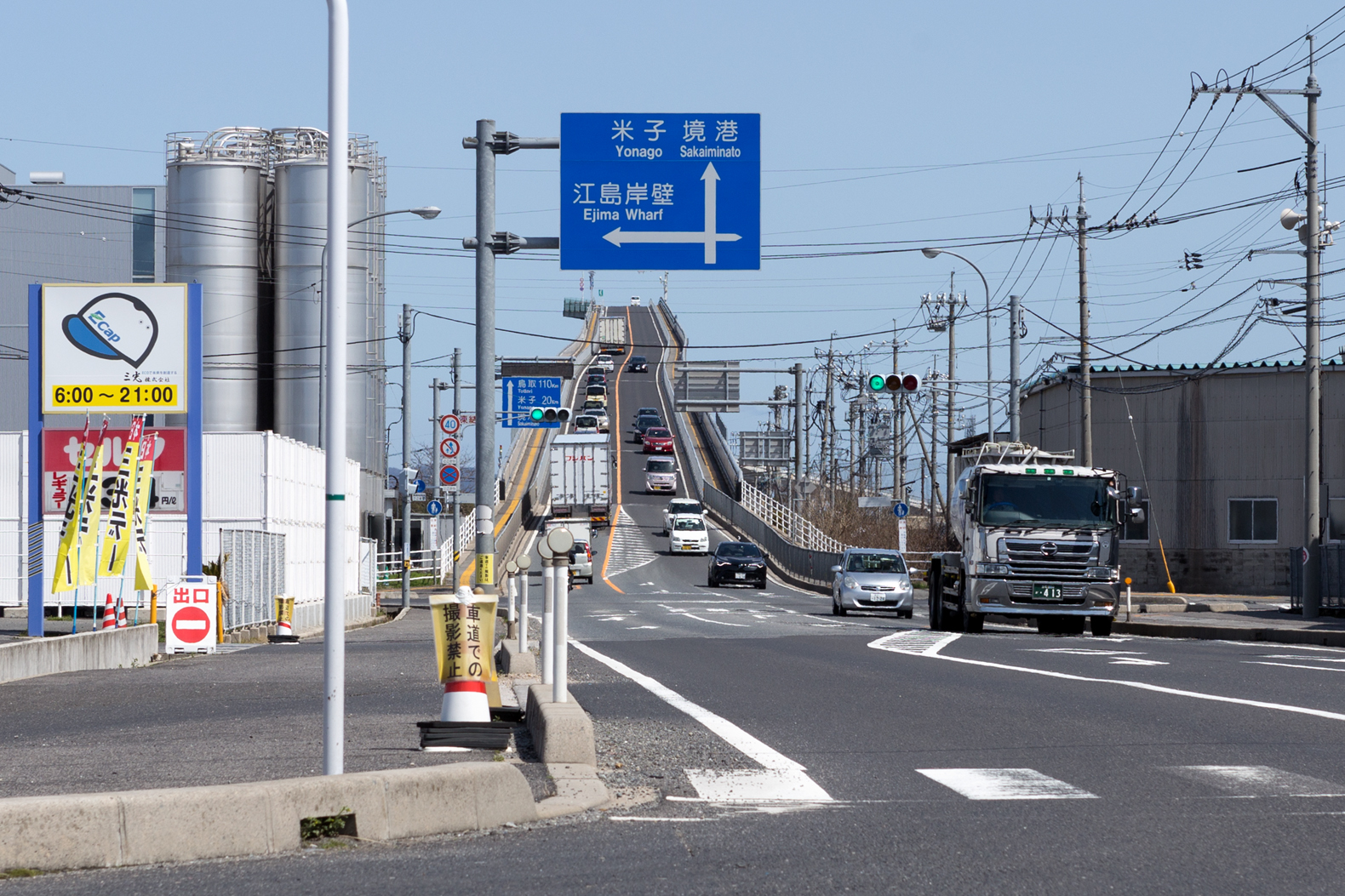 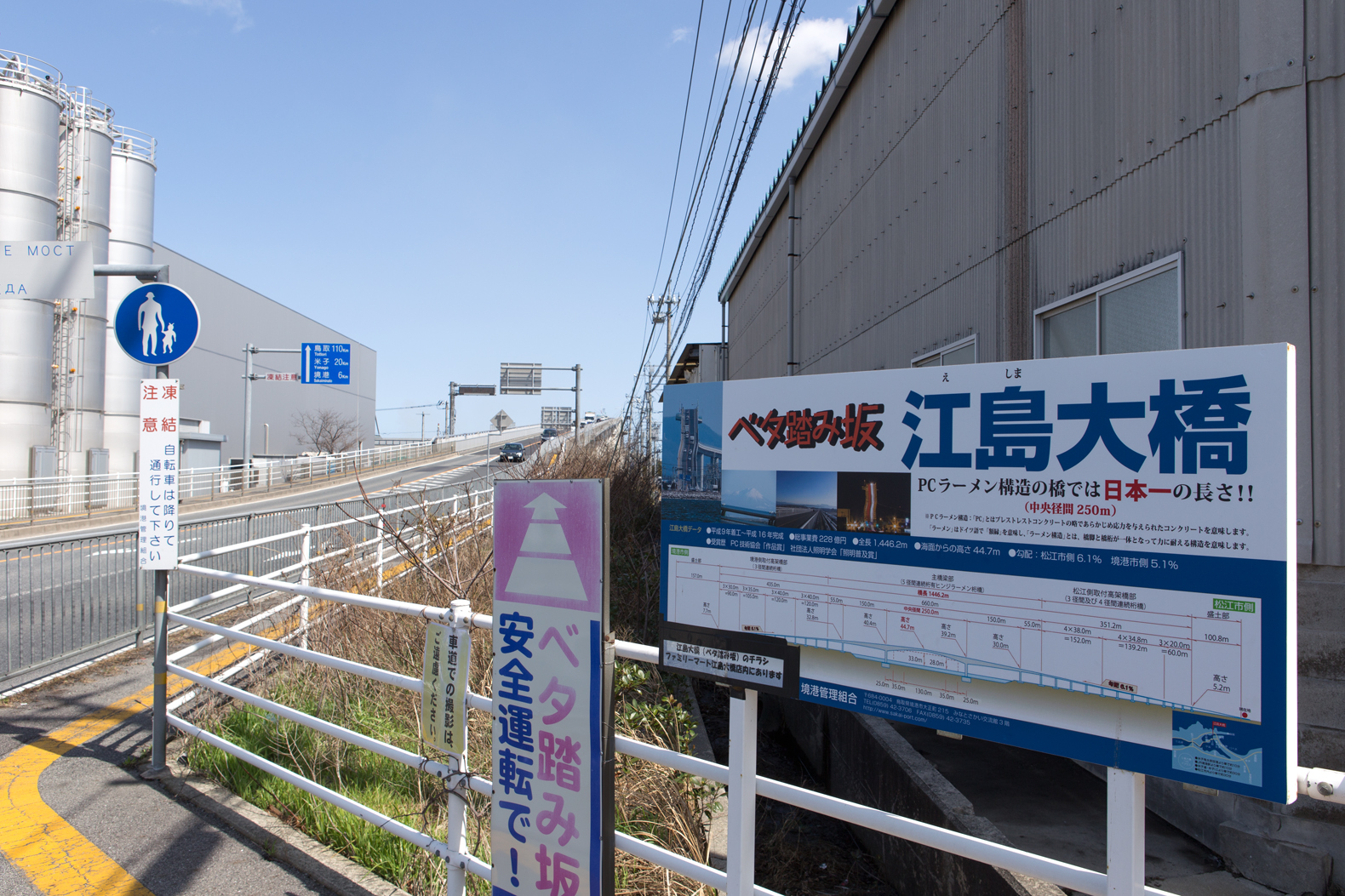 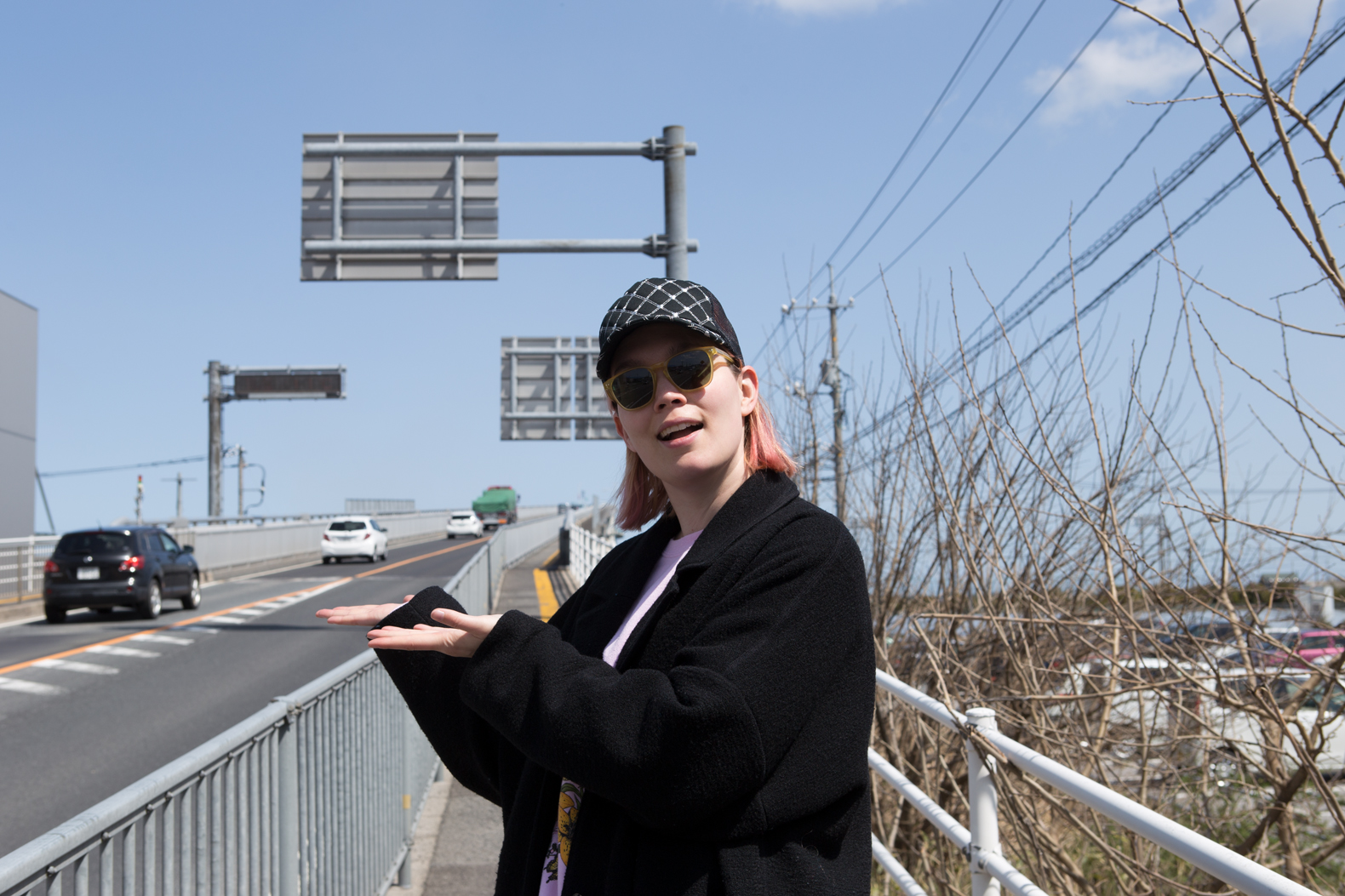 Sorry everyone, this is the best I could make of it. I forgot to bring my five thousand millimeter telelens.

AND WAIT A SECOND! Do I see that… Is that… Let me zoom in. 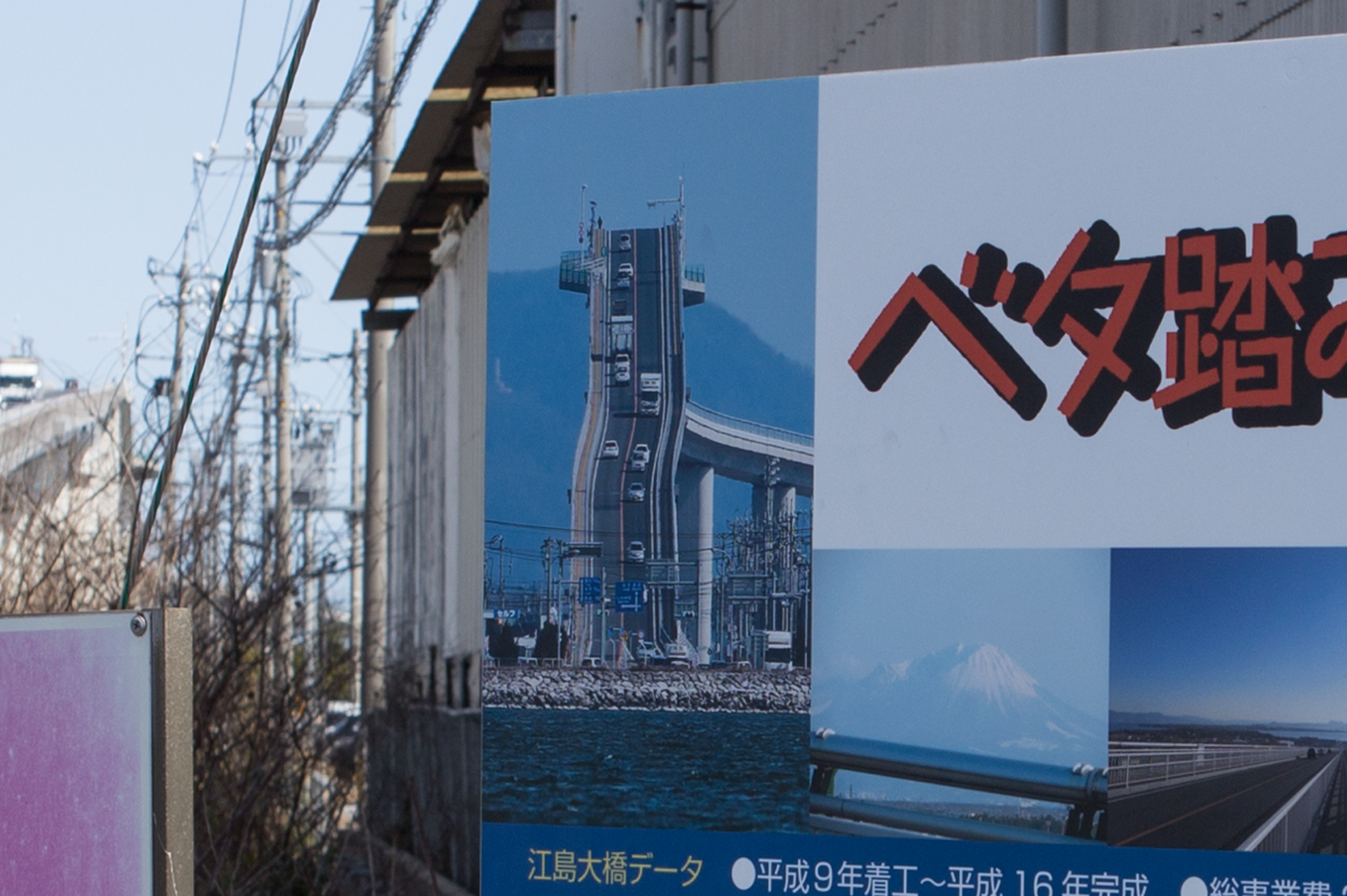 Is that WATER?! Yep. The photographer of this shot got in a boat off the shore, or even worse, took the shot from the other side, with a lot of extra digital zoom. That would explain the horrible quality of most images you find online.

Oh well. We decided to walk across the bridge, which was, just as our taxi ride a few moments earlier, completely non-terrifying, and neither tough nor difficult. It was beautiful though. 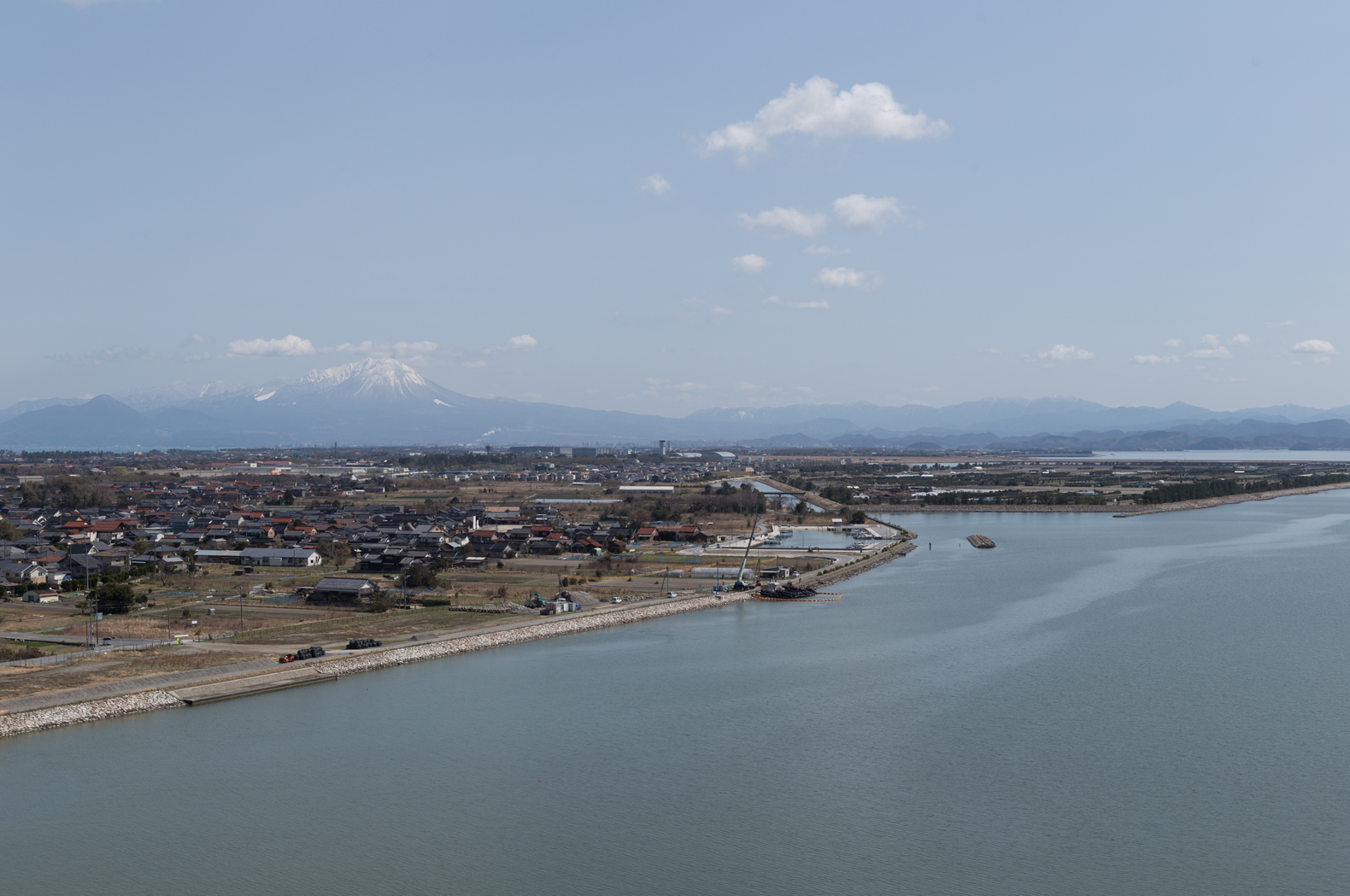 A mountain top covered in snow, a tiny airport of which a Cheapo Air flight to Korea departs once in a while (Matsue is on the west coast of Japan, so Korea is literally on the other side of the sea) and the Japanese countryside. Places I would’ve never visited if it weren’t for this bridge. So I’m good.