We went to an abandoned island near Nagasaki. No, another one.

If they’re good at anything in Japan, it’s…. Anime? High-speed trains? Bustling metropolises with illuminated billboards everywhere you look? Sushi that took ten years to study for? Finding your ikigai? Well, yes, also maybe, but today I wanted to talk about that other talent of Japan: leaving places and buildings behind and then letting them decay.

Back in 2016, Riemer and I visited the abandoned mining island of Gunkanjima, off the coast of Nagasaki. That island, known from the James Bond film Skyfall, among others, is only small, and only a small part of it accessible to tourists, behind neat little fences.

The island we visited last month was just an island. Almost deserted, but with 100 or so residents still there. (According to Wikipedia 130 in 2018, but I suspect it has only declined since then.) This island was also a coal mine, which closed for good in 2001. Most residents left, but a few die-hards remained. That’s why a ferry still runs every day from Sasebo to Ikeshima and back. Or rather, two. So to get to Ikeshima (aka Ikejima), we caught the ferry there at 7:22 in the morning. At 16:09 the next, and only boat went back.

There is also a ferry to the village on the other side several times a day, but that village is not really super accessible either, so we would still be on the bus for hours. For people with a car it is ideal, because the car can even be taken on the ferry.

In its heyday, Ikeshima was home to more than 8,000 people. These people lived mostly in the large, concrete flats erected for the purpose. Most of them are now abandoned and closed off, especially on the back part of the island. Closer to the harbor, more life can be found.

Walking across such an island is a surreal experience. It is quiet, but every now and then a car or bus whizzes by. Yes, for the mostly elderly inhabitants there is a neighborhood bus that drives around. A walk around the island quickly takes an hour and a half, and the terrain is hilly, so such a bus is necessary. Heavy work traffic also drives by, dismantling the old factory or coming to refill giant tanks of gas, which the residents use for heating and cooking.

The cats on Ikeshima meow, unlike the pampered house cats of Harajuku. They also really seem to be asking for help; most cats look sad and unhealthy. I guess it’s safe to say that there are more cats than people living on Ikeshima, and very few people left to care for them.

Kaa-chan, of Kaa-chan no mise (Kaa’s shop) does seem to do just that. The store was still closed when we walked past it, but the cats in front seemed to be waiting for her. Moments later, I am photographing a cat in front of an apparently abandoned building, when suddenly a voice sounds from above. From the upper balcony, a man calls out to us, “His name is maru-chan!”

If you need more space, you can just take one of the houses nextdoor
"Meow, got catnip?"
In front of Kaa-chan's shop was Cat Central

During our walk we also stumbled upon a small coastal village with wooden houses, or well, what was left of them. A café, a cigarette store and a few discarded Pachinko devices. It seems like the wooden village was a sort of downtown for the residents, a place to go to for fun. But that was a long time ago.

Elsewhere on the island, we spotted a school that seemed far too big for such a deserted island, a city hall turned into a guesthouse/hotel, a store and a post office. Yes, the post office was open, and the postal worker there probably had as enervating a job as his or her colleague in Namie.

Across this abandoned bowling alley, a man was washing his car
This used to be a bar
Your dynamic duo
Security cameras in operation! (Or not.)
Is it abandoned...
...or is someone still living there?
Breezy
This roof on the front of the building reminded me of a Pizza Hut
This house totally collapsed onto the road

To protect the world from devasta... Oh well, never mind

It is extraordinary how quickly decay takes hold, once a property is abandoned. Once sea wind and plants are given free rein, it’s done. What remains is beautiful light and faded memories of how things used to be.

It took us a while to figure out how it all worked with that ferry, but we know now, so to make it easy for you, here are a few good tips: While in the Netherlands the corona virus is taking hold, everything is closed and everyone has to stay at home, it is slightly less intense in Japan. Yes, certain things have been closed for weeks. But although everyone suspects the government of lying (because of the Olympics), it actually seems to be not too bad here. 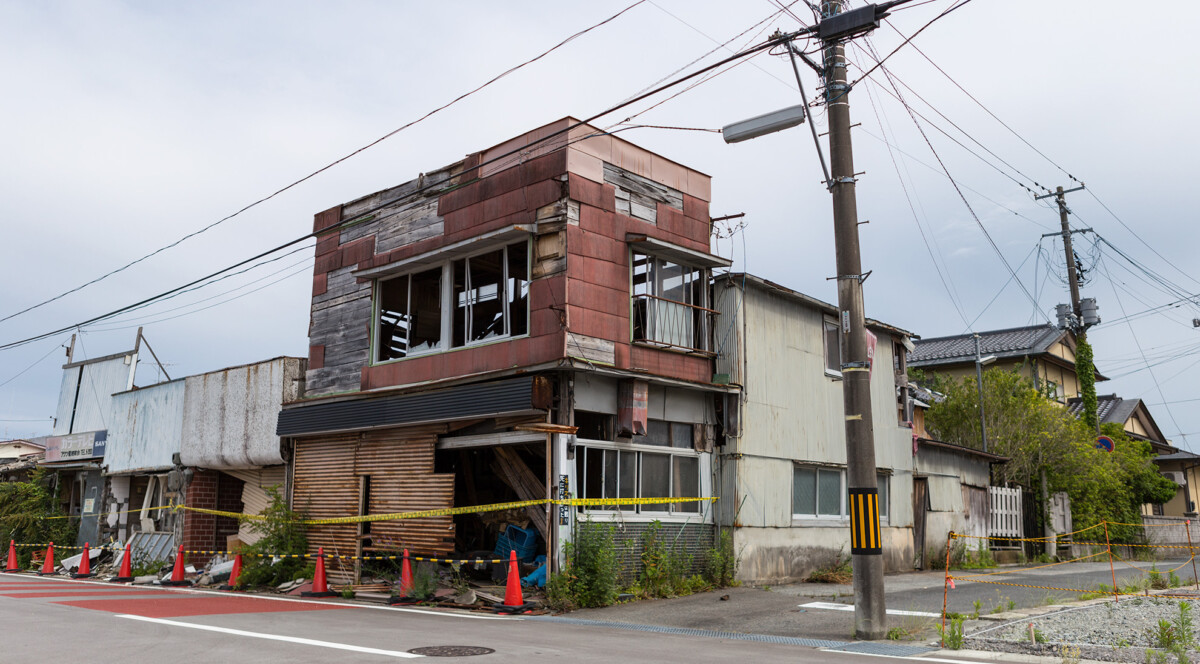 Who wants to go back to Namie, Fukushima?

On the 15th of March 2011, four days after the devastating earthquake and tsunami, and the subsequent disaster of nuclear plant Fukushima Daiichi, all inhabitants of Namie that aren’t evacuated yet, are ordered to leave their town. The radiation levels in the village, just eight kilometers away from the plant, are way too high. A little […]