Oh-oh. Yesterday I got into a twitter fight with an angry lady, who found the recent Karlie Kloss editorial in Vogue US to be an example of respectless cultural appropriation. My attempts to add some nuance to the story failed, so here I am, trying again.

WHAT IS CULTURAL APPROPRIATION?

So, it’s about using elements from another culture, but the problems start when the culture that is “borrowed” from is a minority, and elements of the culture are used out of context. As wiki states it:

“According to critics of the practice, cultural (mis)appropriation differs from acculturation, assimilation, or cultural exchange in that the “appropriation” or “misappropriation” refers to the adoption of these cultural elements in a colonial manner: elements are copied from a minority culture by members of a dominant culture, and these elements are used outside of their original cultural context—sometimes even against the expressly stated wishes of representatives of the originating culture.”

Okay, SO what is all this fuss about?

About these photographs, by Mikael Jansson, for the march issue of Vogue US. 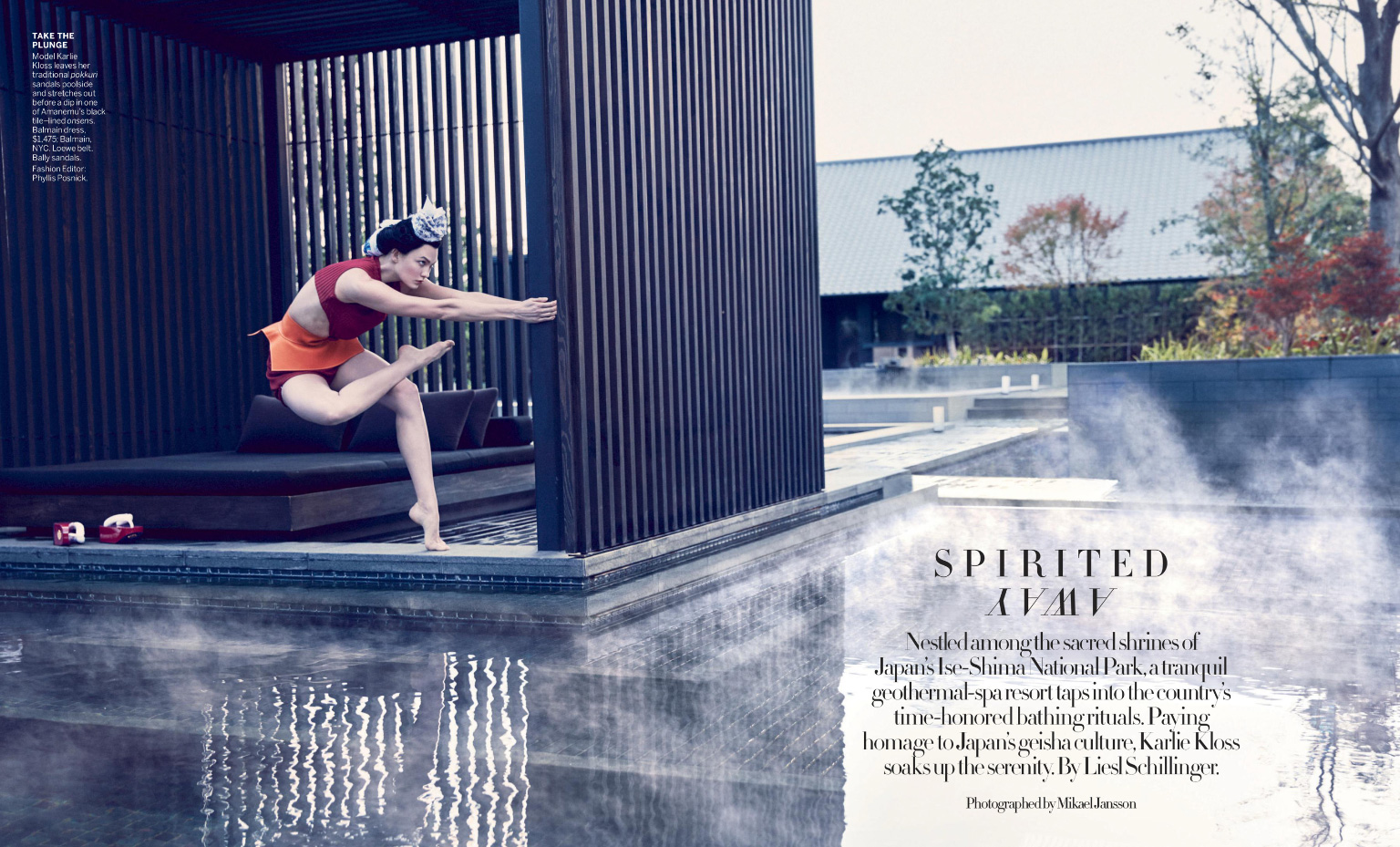 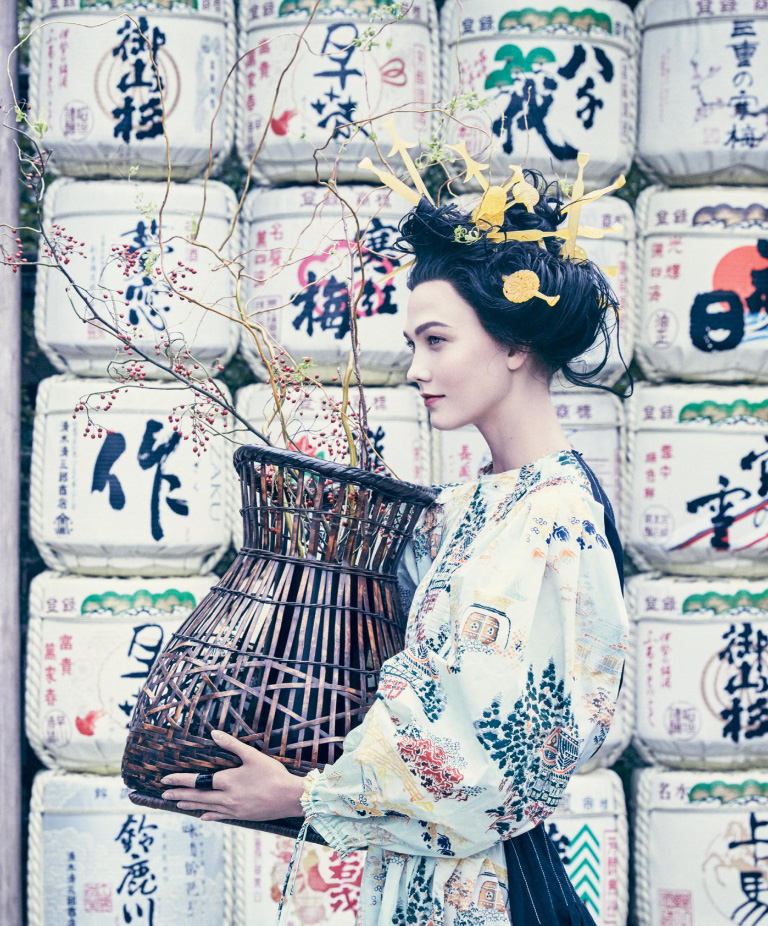 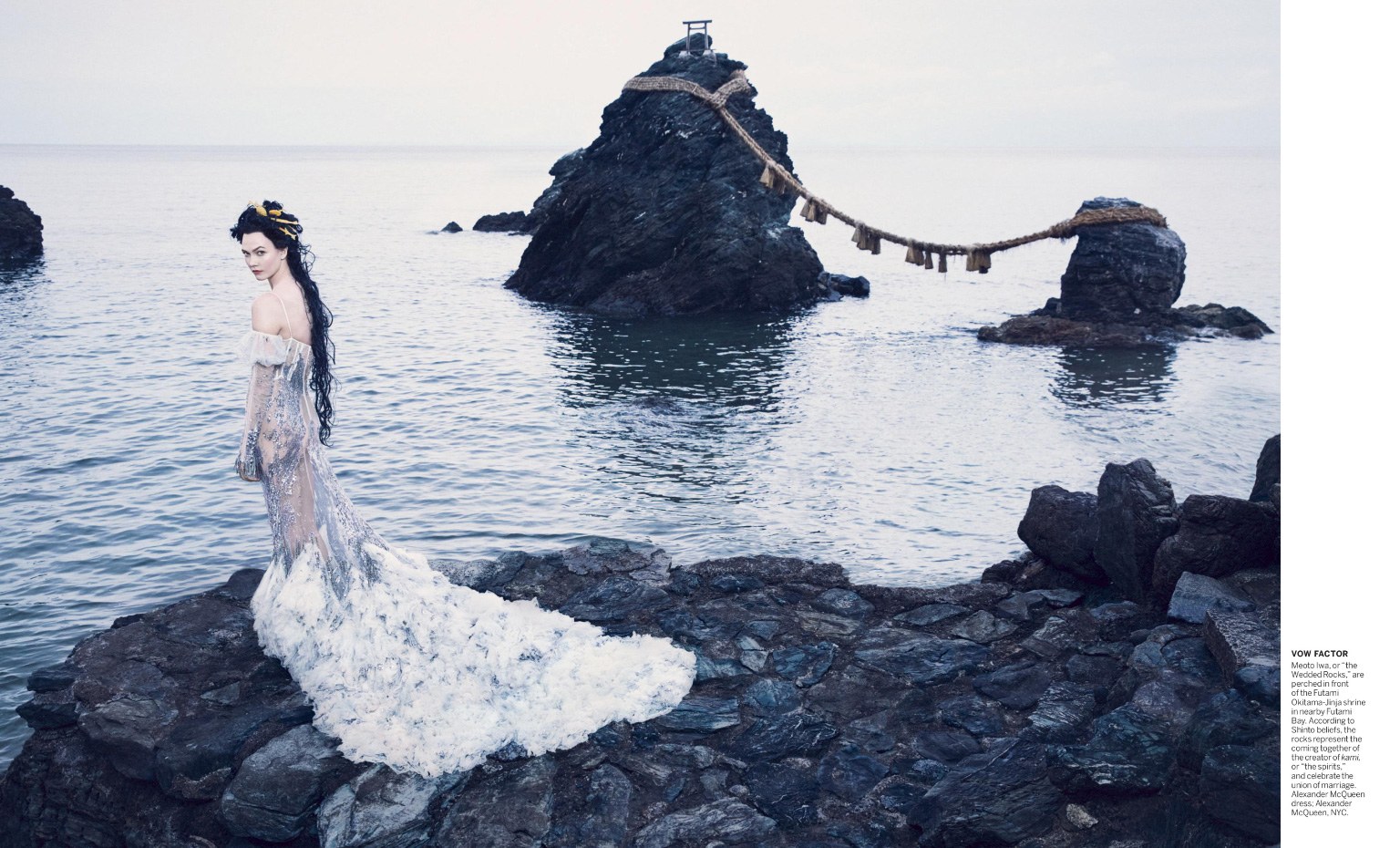 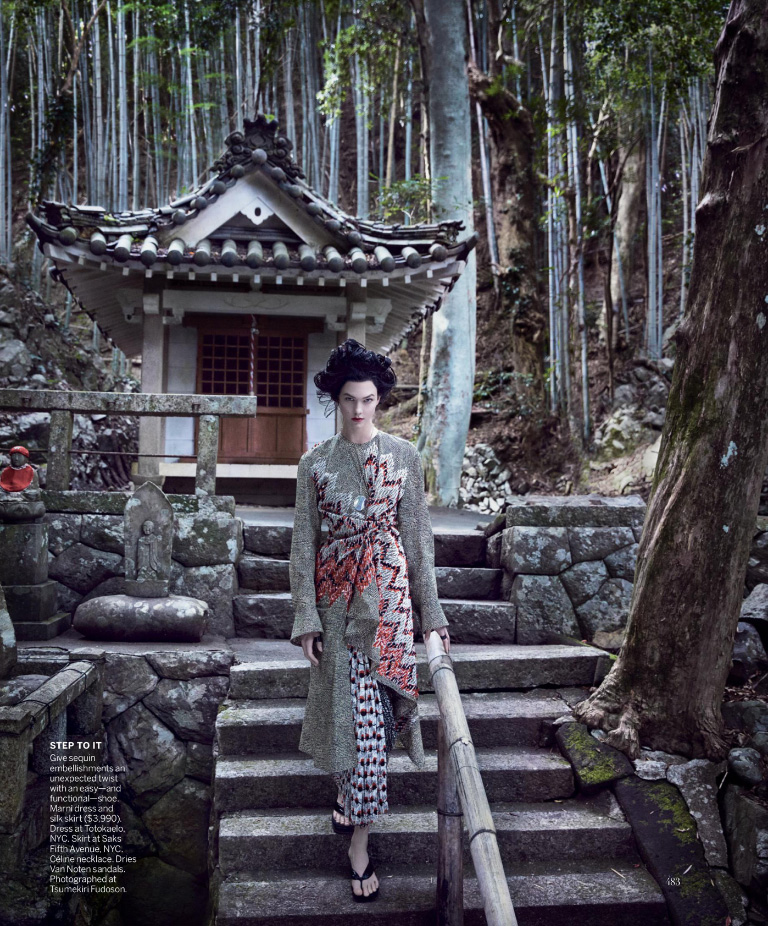 Hmm. Is that true? I noticed that the angry mob on twitter existed mostly of black, American women. It’s clear that they have to deal with cultural appropriation and the pain that that’s causing. They’re a group that, in the last century, didn’t even have the same rights as white people. They’re a group that has been discriminated against since forever. But! That’s considering the appropriation of black culture in America. You cannot extrapolate that one-on-one to Japan.

First of all, the Japanese are not oppressed. They’re absolutely not oppressed in Japan, where this editorial was shot. Who visits Japan regularly, like me, and knows a bit about Japanese culture, knows that the Japanese want everyone to adapt. If you want to go bathing in an onsen, you have to wear a yukata (cotton, kimono-like garb). A bathing suit? Forget it. Not allowed. 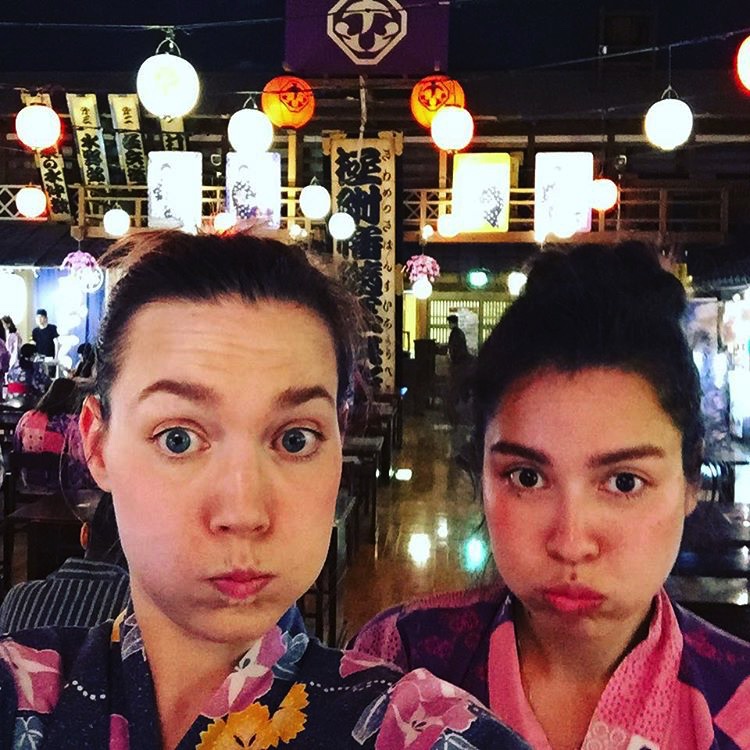 Charlotte and me in yukata: appropriating Japanese culture? Or just enjoying the onsen like everyone else?

When visiting a temple, it is actually appreciated when you wash your hands and bow to the torii (gate). It’s not compulsory, but that’s because they think: “Oh well, it’s foreigners, they don’t know our customs.” One that joins in on Japanese culture, and for example wears a kimono on a national holiday, is cheered upon, rather than frowned upon. 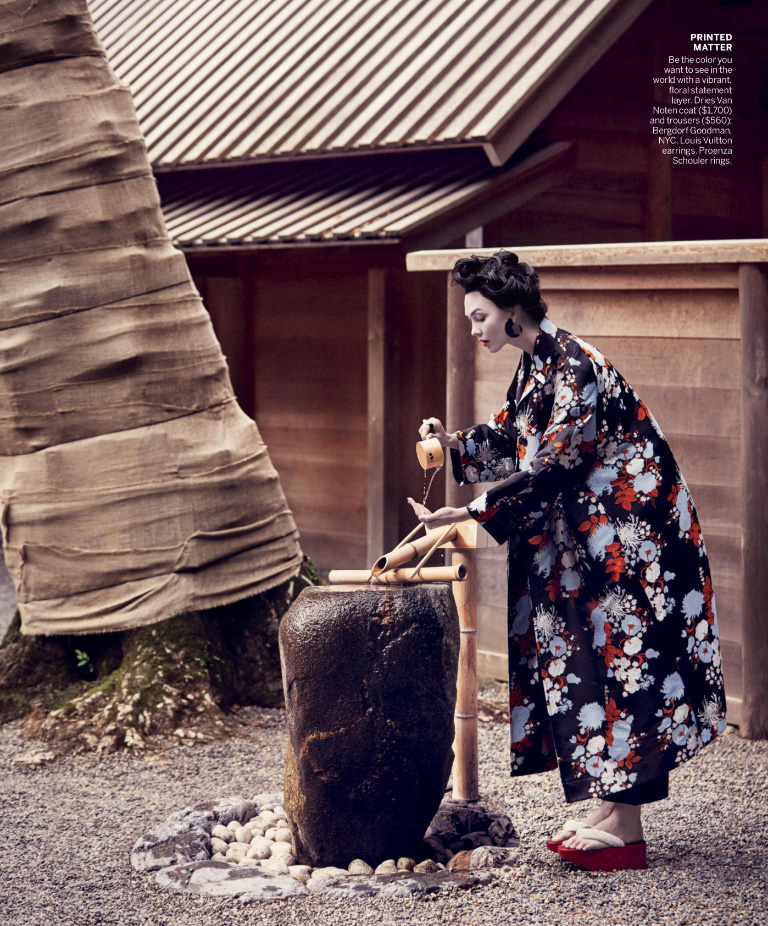 “But they couldv’e booked a Japanese model?!”

True. They could have. Why they picked Karlie? I’m not sure, but this editorial seems to be a giant ad campaign for the Ise-Shime region.

The editorial gives the reader a lot of information on the region. That’s not something you see in every fashion story. 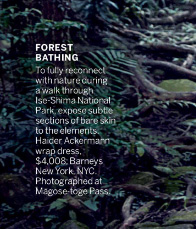 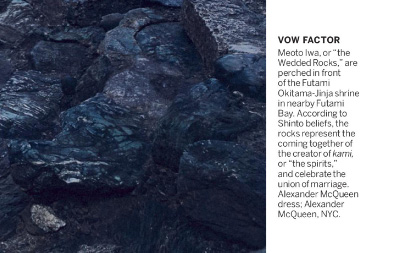 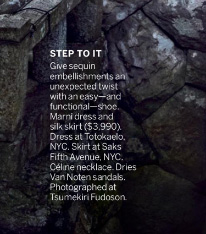 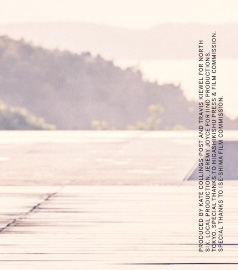 It’s not very clearly readable, but the last screenshot tells me a lot: They used two Japanese “press and film commissions”, one of them being the Ise-Shima film commission. This, added to the fact that a lot of info is given on the region, leads to only one conclusion: This was a sponsorship of some sort.

It’s very common in the fashion world to collaborate with tourism agencies, airlines or hotels, to produce a fashion story. In exchange, they get a page or extra attention in the magazine.

So, what happened here: This region, which is not the most famous region in Japan amongst American tourists, wanted to attract more Western trourism. And that’s why Karlie is an excellent choice. The story basically says: “Do you want to go on a relaxing trip? Think about Ise-Shima!” Oh and, buy designer stuff, of course.

“But what about the sumo? Respectless!” 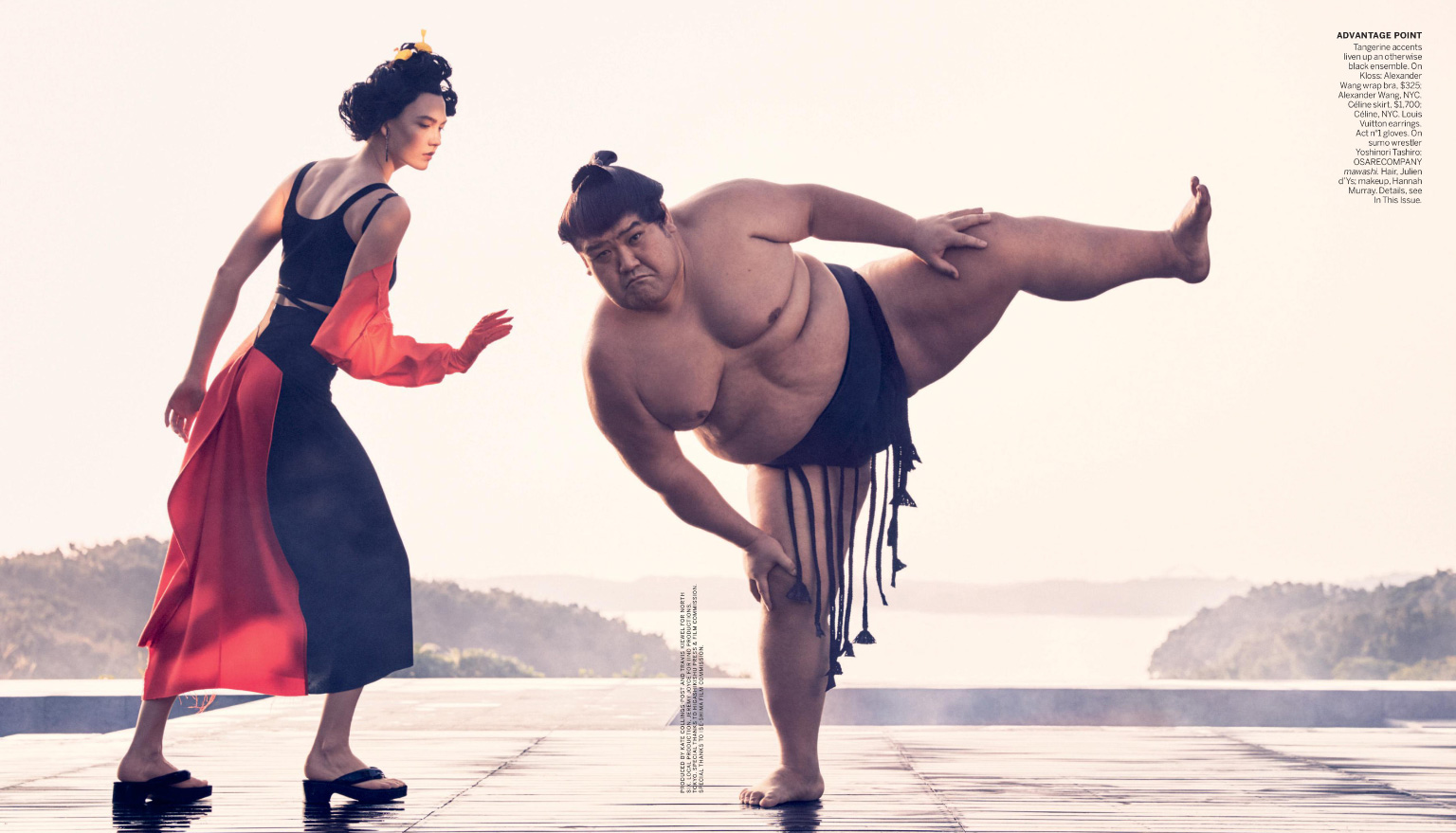 You could think that using a sumo like this is respectless. But you have seen nothing yet. Sumo wrestlers (yes, this guy is an actual sumo, named Yoshinori Tashiro) can be seen in the weirdest Japanese commercials, like this one voor Pretz, or this one for Japanese phone provider SoftBank (co-starring Brad Pitt). You could say that sumo wrestlers, as sports heroes in Japan, are as likely to engage in commercial activities as football players in America.

What does Japan think of this?

Maybe that’s the most important question. The angry woman on twitter accused me of speaking for the Japanese, as if they were unable to do so themselves. (Which was quite ironic, since she wasn’t Japanese either…) So I decided to google カーリー・クロス. Also known as Curry Cross or Curly Cross, according to Google Translate. Oh well. I found an article on the website of the Japanese Huffington Post, where I found a piece of text that the American version conveniently left out: 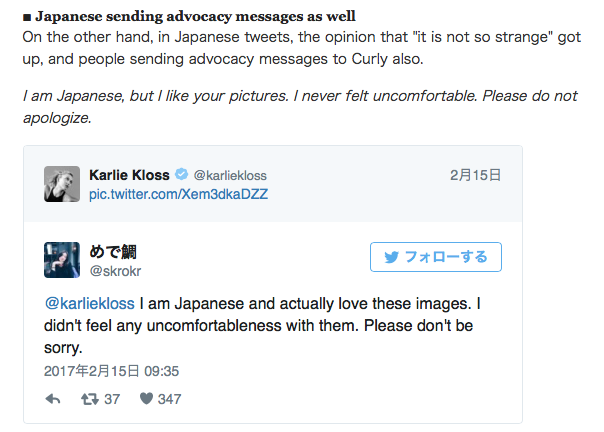 So the Japanese, the people that are already apologizing when they accidently touch your coat with their wet umbrella, or when YOU hit THEM with your bike, even THEY think it’s unnecessary to apologize. Karlie did apologize though, after the shitstorm that hit her.

You might wonder why I am writing this. I don’t oppose the social justice movement, and I’m aware of this thing called white privilege. But! I do feel like there needs to be room for nuance. As someone that travels to Japan a lot, I know that their visions on culture are different from the American ones. I find it difficult to write this, and I’m already fearing an angry mob coming for me, but I wholeheartedly believe that knowledge and information should prevail, and that nuance is needed in this discussion. So here it is: nuance.