The Japanese secret for everything

Recently I was strolling through the book store while waiting for my train, and there I found The Secret For A Long And Happy Life. Or well … I don’t know exactly who to believe. There is the Danish “Hygge”, the Swedish “Lagom”, or “The Way” of the Chinese.

I don’t know why the cover of the Chinese book looks a remarkable lot like the Japanese flag. Or well … Japan takes the cake in this cult of happiness.

“Ikigai” and it’s sequel, “Find your ikigai”, are in the bestseller top 10. A book titled “How to become a hundred years old”, about the inhabitants of the Japanese island of Okinawa, is next to a book with a picture of a bowl repaired with gold: “Kintsukuroi”. The art director has put some kind of golden seal of approval on the cover: “The Japanese approach to success”. The book should teach you how to deal with your imperfections so that you can become a happier person.

“Kakebo” is about the kakeibo (Japanese for household legger, I don’t know where the letter i went), or “the Japanese method of saving money every day”. “Goodbye stuff” (subtitle: “The new Japanese minimalism”) is on the shelf next to it, and of course you all know my writings about Marie Kondo and her KonMari method. Yes, I am guilty. Yesterday I even bought “Find your ikigai”, after briefly browsing through the copy of a fellow retreat goer two weeks ago. It annoyed the crap out of me.

The writers of “Find your ikigai” take a trip on the shinkansen (high-speed train), learn about the history of this bullet train and then conclude: We have to start thinking like the people who developed the shinkansen. They did not go for a small improvement, but set an almost impossible goal: A train that went twice as fast.

Set semi-impossible goals! Shout “Ganbarimasu!” (the Japanese word for “I’ll do my best!” or “I’ll persevere!”) and never stop! Setting your “shinkansen goals” – I shit you not – would bring you closer to Great Happiness. Frankly, it mainly stresses me out.

But the Japanese are very Zen. At least, so I read further on.

“Cameras with film are still used in Japan. When you walk through Shinjuku Gyoen Park, you’ll see not only people with phones and digital cameras, but also people who go for the emotion of the analog shot and the charm of waiting on the printout.”

OH FOR FUCK’S SAKE! Analog cameras. We have those in the Netherlands as well! Think of the festival kids with disposable cameras, the artists, the darkroom hobbyists … Plus, I’ve walked through Shinjuku Gyoen often enough to see that 99% of people shoots digital – just like we do.

The book then ravels on Shinto temples, Buddhist monks, haikus, calligraphy and mindfulness. The writer also talks about his friend, a Japanese engineer, who volunteered to serve coffee after the big earthquake in Kumamoto.

Wow. That’s a huge difference from the image television likes to paint, of sex-minded, overworked, lonely, crazy robot-humans who like to watch bizarre and cruel TV shows.

Is Japan a country of extremes? Or is it the stories about Japan that seek extremes and present them as if they are commonplace?

When I tell people that I often visit Japan, people usually react from one of those two extremes. From “Oh yes wonderful, I am so spiritual, I want to sleep with the monks someday!” to “But Japan, isn’t everyone killing themselves there?”

Neither statement is correct. But both might hold a little truth to them. You could learn from “the Japanese method of saving money every day”, but at the same time you should know that private debt is a common problem in Japan. Repairing a bowl with gold? That’s a nice hobby, they sell stuff for that at Tokyu Hands, next to tools for embroidery, crochet and crafting greeting cards. But by far most Japanese people I know just throw away a broken dish. KonMari? I love Marie Kondo, but I know she’s now more famous in America than she is in Japan, and loves to fill her pockets at high-paying seminars, frequented by over-enthusiastic LA housewives who want to become a “certified” KonMari consultant.

Oh and, that creepy pedo on Stacey Dooley’s TV show, with his life-size doll in schoolgirl outfit …? They find him just as crazy in Japan. 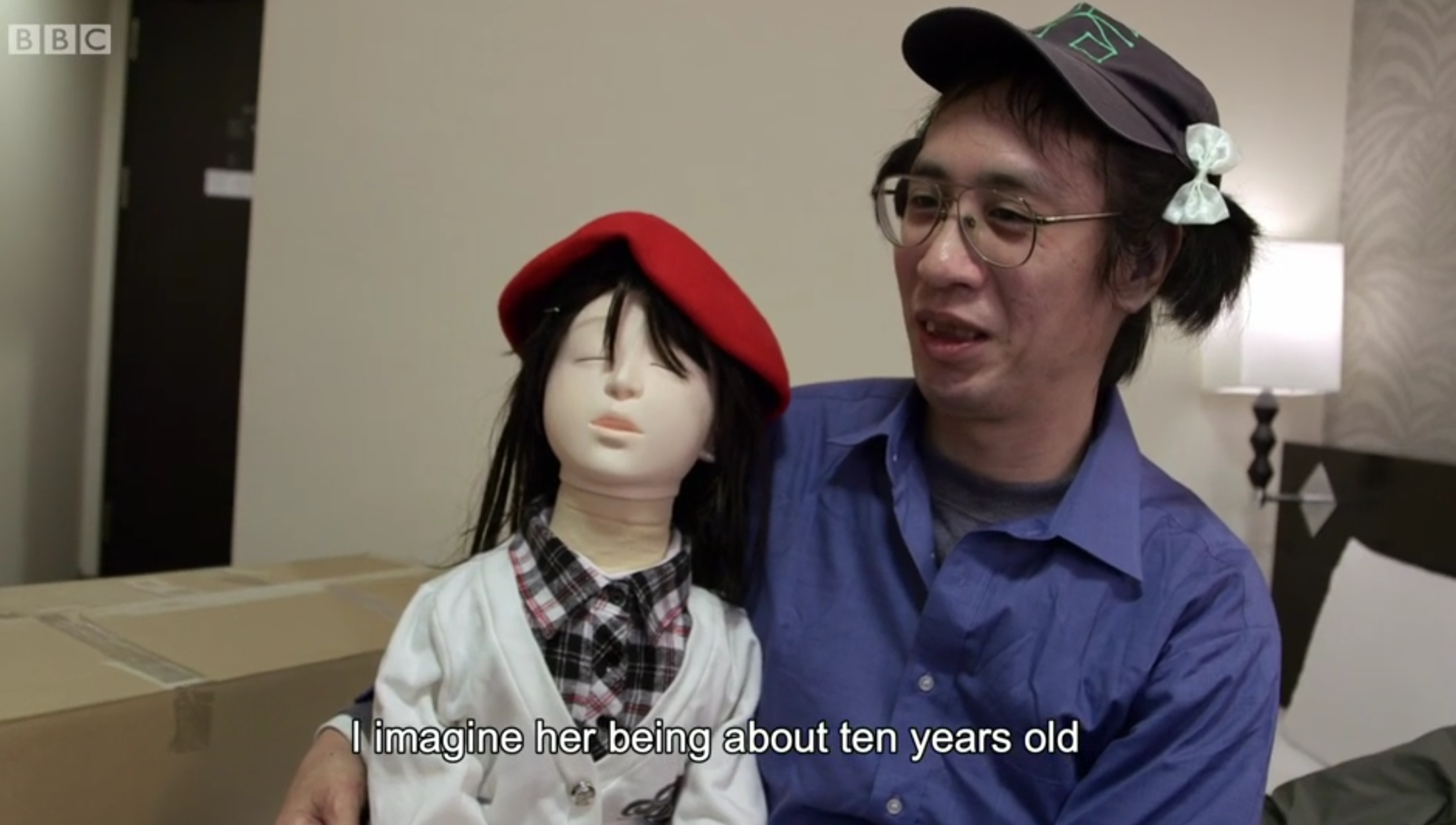 Believe me, Japanese people think this is creepy too

In short: Japanese are people. Happy people. Sad people. Ambitious people. Lazy people. Fun people. Stupid people. Yes, Japan is different from the Netherlands, that’s why I love to go there. And no, not everything about Japan is perfect. But please, self-help book writers from the Netherlands and the rest of the world: Stop glorifying an entire country, an entire population, because they would know how to become “happy”. Sometimes you are happy. Sometimes you are not. Shoganai, they would say in Japan. It can’t be helped.