It was a bit scary, because Micron and Macron also imposed restrictions in France. English people, for example, were no longer allowed to enter the country without an urgent reason, and parties were out of the question. But the 185 euros we had paid for the Disney New Year’s party was refunded, and the park remained open. On December 31 even until 1 am, without extra fee. And I didn’t want that party that badly, so hey, profit. 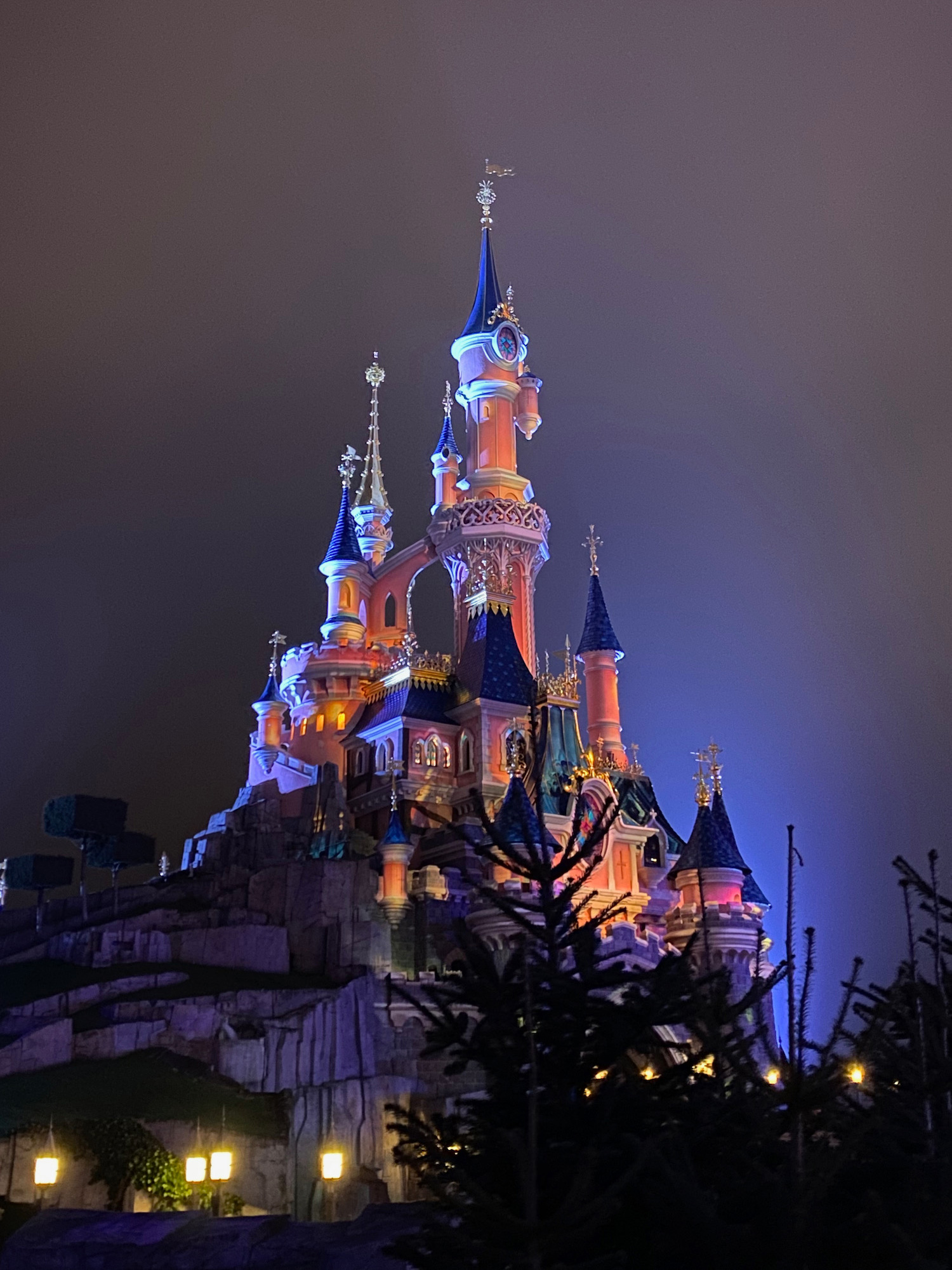 My followers pointed out to me that as an autistic person, you can get a pass, called a Priority Card, which allows you to use special facilities. You can apply for this card here, if you have an Autipas, a Wajong document or a few other possible pieces of evidence.

I didn’t have any of those documents, so it had to be an Autipas. I didn’t have one either, but I could apply for one at the NVA, after sending in my diagnosis. It took three weeks and cost 45 euros. Ridiculous? Very much so. The pass is also only in Dutch, which makes the thing pretty useless. If you could not go to Disney with it, then I would recommend everyone to just plastify a piece of paper yourself. But since you can go to Disney with it, I wanted to test that.

At first I thought it was nonsense. I have been to Disneyland Paris at least twenty times before. I know that park like the back of my hand. I felt like a bit of a freeloader…. Until we went into the park.

Because holy shit, the chaos. Peak season + corona + ever-present terrorism threat in France made me want to punch people before I even got into the park. It started with showing our QR codes at some tent in front of our hotel, at which we got a paper wristband. One of those festival things. We had to get that wristband every morning, so all we had to do for the rest of the day was wave our arm at every QR checkpoint. Then there was a bag scanner and someone with a hand scanner who was going to check me. No advance warning, just angry French people shouting things.

The check-in went smoothly, because we had prepared a whole folder of paperwork at home. Then I had to go to the concierge (the desk opposite check-in) to get my Priority Card. I had applied for this one too online, but the cast member in question first had to look for an inch-thick handbook, to look up what on earth an Autipas was, and whether it would actually entitle me to such a Priority Card. So meanwhile, I was standing in the hotel lobby, coat on, mask on, and the soul-deadening noise of rolling suitcases and screaming children in the background. Or rather, all around me, like some thick cloud of aural smog that you can hardly see through. It smelled like hospital, courtesy of the thousand dispensers of hand sanitiser hung everywhere.

Oh yes, the Priority Card. I got one with a green square. That means I can get in and out of attractions independently, or, if necessary, evacuate. People who can’t, think of wheelchair users, get an orange or red square, and thus are not allowed to enter everything. Furthermore, the pass indicated that I was allowed to enter attractions with a group of 4 people maximum via the priority entrance. There were only two of us, so that was fine.

Although the internet states that the pass does not provide immediate access (I expected it to work like the fastpass, where you get a ticket with a time when you may return), but in practice this was actually the case everywhere. As a pass holder you follow the signs with a wheelchair, which in 95% of the cases is just the exit, and there you will find a short line with other pass holders. As soon as it is possible you can get in.

This was super nice, because everything at Disney was intense this time. When we were in the Studios on Friday, I thought I was going crazy. So many people. Now that park is currently a disaster anyway by the many renovations, but because of corona they also have all the queues largely outside. So the square at Ratatouille was completely full, with queues and food trucks and people who do not know they’re even alive, and so just stand still in the middle of the walkway. All this accompanied by Christmas music blaring through the speakers.

At other rides, some sort of makeshift plexiglas walls have been put up, which, when there is a zigzag queue like at Big Thunder Mountain, reminds one of a fairground maze. Hell. Not that those plexiglass walls made any sense at all, or anything. At Star Tours, we were between them in the pre-boarding line, but once in the Star Speeder, you’re all in that simulator, with no empty seats or anything in between. And “screaming inside your heart“? They can only do that in Japan.

By the way, there is a strict enforcement on masks, and almost everyone wears them – even outside. (Except during dinner, of course, then they can be taken off). 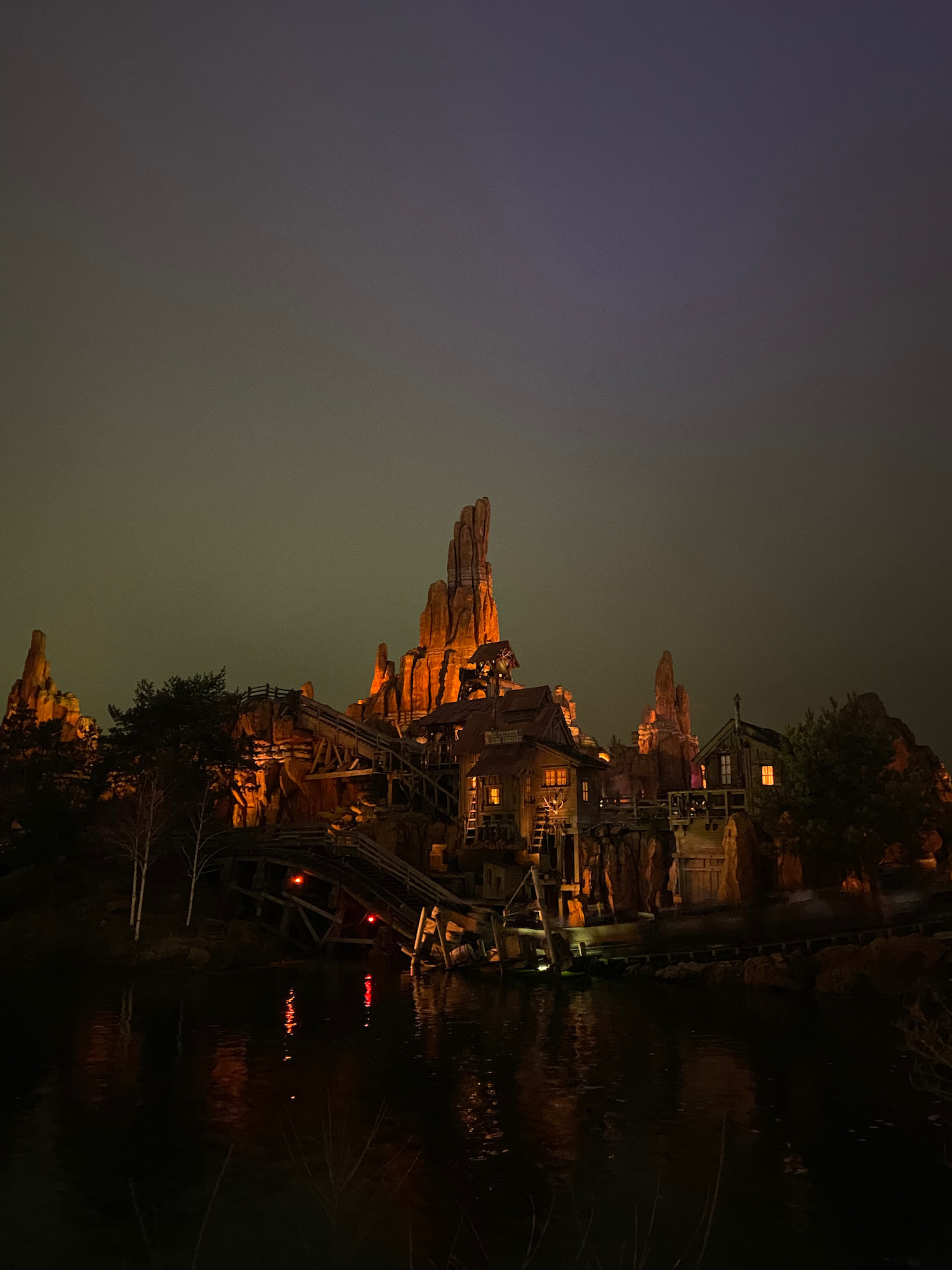 Disney nerd because I have to

Anyway, I was very grateful to my past self for ordering that Autipas. Even with that pass, Riemer and I didn’t make a single full day. We regularly went back to our hotel to rest, and I asked myself: how on earth did I used to do this!

But then it occurred to me that I used to have headaches all the time. Or well, at least one day of the vacation. And if it wasn’t a headache, it was crying. Or arguing. In the distant past, I used to obsess over how much popcorn and brownies I had eaten.

Further, I used to usually not go during peak season. As a Disney nerd, I knew all the quiet days, nooks and crannies and restaurants. May-but-not-May-holiday gave the best weather for the cheapest rate, Colonel Hathi’s Pizza Outpost was the best restaurant to take a breather. But in high-season-covid-construction-Disney, I don’t know anything.

By the way, I don’t want to say that it’s all much better now with that Priority Card though. What you gain in speed, you lose in knowledge. Sometimes I wonder if Disney autistics know so much because they are fans, or because they have to, to keep it doable. I didn’t know how the Priority Pass worked, so I had to ask cast members a hundred million times where I should go. At Phantom Manor, where of course you must not enter through the exit, because otherwise you miss the stretch room, we were directed from entrance to exit to side stairs. That’s more communication than I’d like. And if you can get a fluent “Bonjour, deux personnes! out of your mouth, you can expect directions in high-speed French afterwards.

When you enter an attraction through the exit, you are invariably looked at angrily or in amazement by the stream of people who just got off. You can hear them thinking, “Those suckers are doing it all wrong!” At Peter Pan, you stand behind a gate that opens in your direction, but if you step aside the cast member doesn’t see you. At Crush Coaster, boarding was so high speed (“Help, where do I leave my bag?!” – the carts of Crush Coaster don’t stop at the station, but keep moving slowly…) that I can imagine an autistic person doing this for the first time would have had an instant meltdown.

I’m not saying this to complain, by the way, because I’m incredibly grateful for the pass. Not because it prevents so many stimuli, but because it saves time. Time you can then spend shivering in your hotel bed, or sitting in the secluded corner behind Space Mountain, where you can finally take off your mouth mask without too many people around, while sipping on the bottle of drink you bought at Star Traders (the only place where you can get chips and drinks without a line). 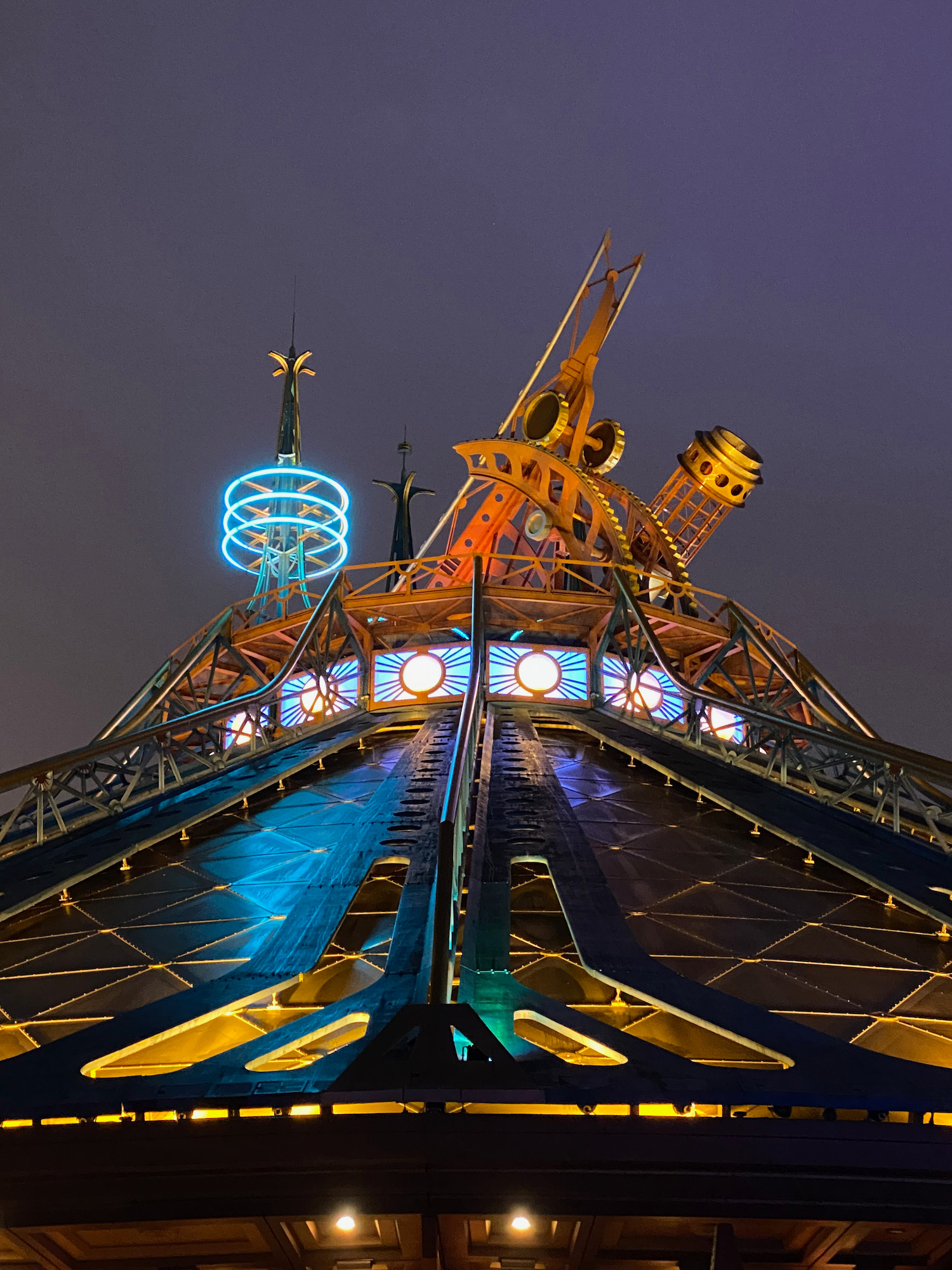 Space Mountain from behind

In short: would I recommend the Autipas + Priority Card? Hell to the yes. Would I recommend going to Disneyland in the middle of a pandemic? Only if you can afford to get corona. The self-test we did yesterday was negative, but the PCR test scheduled for Wednesday will tell whether or not I can go to Korea as early as Friday. Was it all worth it? So we’ll see. 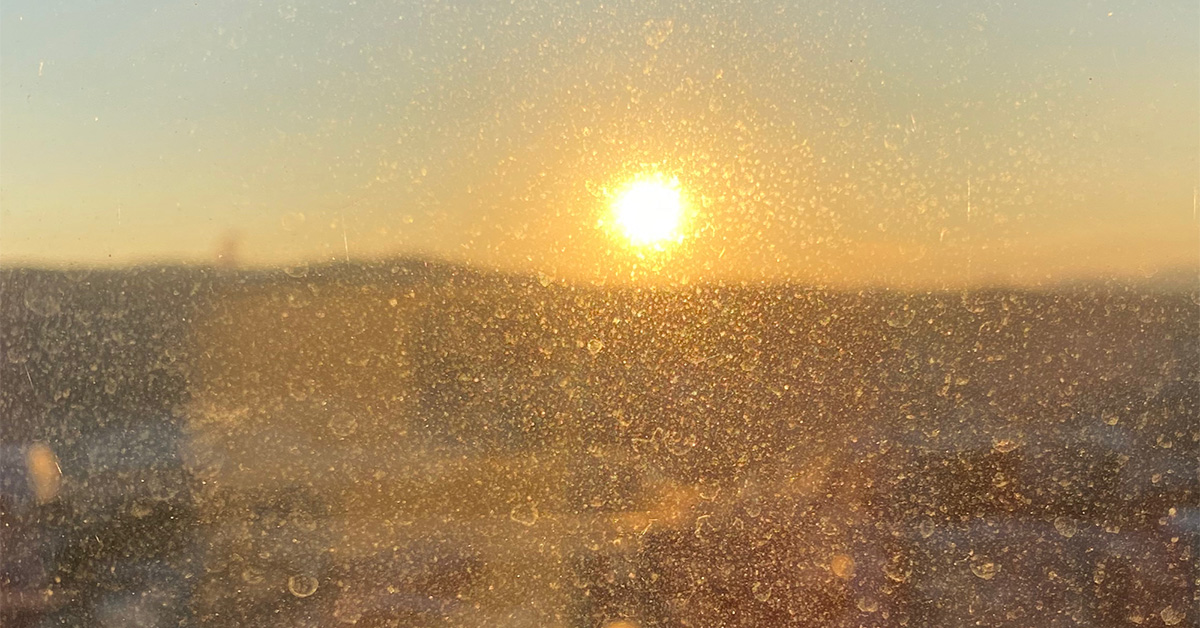